Or
Close Popup
+
2 Tutorials that teach Advantages and Shortcomings of Divine Command Theory
Take your pick:
Previous Next

Determine the morality of a given action according to divine command theory.

Tutorial
what's covered
In this tutorial we will start by going over the two main ways of understanding the relationship between God's commands and the good, before looking at how divine command theory relates to our everyday ethical activity. Our discussion will break down like this:

1. Review of the Euthyphro Dilemma

To begin with, recall that divine command theory is an ethical framework that evaluates the morality of our actions in terms of how they measure up to God’s commands. In this account, the only thing that determines right and wrong is God’s free command.

But a problem arises when we try to think about the relationship between God’s commands and the good. This relationship can be understood in two different ways:

Neither way to understand this relationship is satisfactory and is referred to as the Euthyphro dilemma. Divine command theorists might try to take one of these options nevertheless. They are usually referred to as:

big idea
If God freely chooses what is good, then it’s unstable because it’s based on a decision that might change (voluntarist option). But if God only commands what is already good, then it is no longer God’s free command (intellectualist option).

Consider these two prohibitions found in the Old Testament. 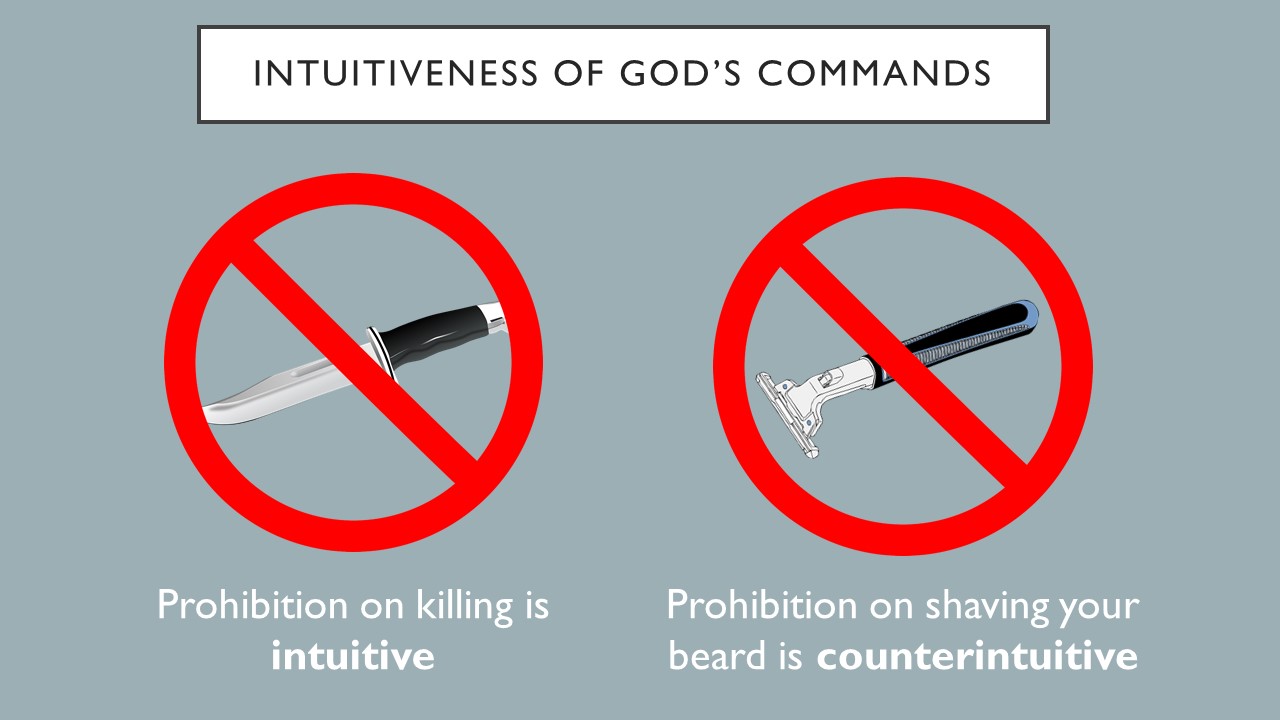 If you take the voluntarist option, you can’t just ignore the counterintuitive results. If you do, then you aren't using an ethical theory consistently, but merely picking and choosing which bits you like. But it isn’t just counterintuitive results that cause problems. There are many difficulties in finding ethical guidance through holy texts.

First of all, you need to decide which text to use to find the command for your situation. For instance, some versions of the Bible exclude certain books (e.g. the group of books called the apocrypha are not usually included in Protestant Bibles). Even once you’ve decided on a specific version, you then need to consider the translation; meaning can be altered by the words used to translate the original.

If all that weren’t difficult enough, you still have to interpret the holy texts, and it's not always easy to find clear guidance on a particular issue.

Sometimes there are just no available commands for your situation. What if you were concerned about the environmental impact of frequent air travel? There isn’t a direct command for this.

You might try to get around this by trying to figure out the ethical basis for God’s commands, and then using this to judge things that God doesn’t talk about (such as air travel). But if you did this, you would be assuming that morality is independent of God’s free command; and this would mean you have taken the intellectualist option.

summary
We started this tutorial with a review of the Euthyphro Dilemma, concentrating on the way that a divine command theorist could deal with this. Then the intuitiveness of divine command theory was considered by showing how basing ethics on God’s commands may sometimes match up with what you intuitively think about right and wrong, but sometimes does not. This led us to think about some other difficulties in understanding God’s commands.
Rating Header
Poor
Fair
OK
Good
Great
© 2021 SOPHIA Learning, LLC. SOPHIA is a registered trademark of SOPHIA Learning, LLC.