Or
Close Popup
+
2 Tutorials that teach Analysis of Evidence
Take your pick:
Previous Next

Recognize how context, translation, and analysis are used to effectively integrate evidence into a piece of writing.

Tutorial
what's covered
This tutorial covers the specifics of integrating evidence into essays by discussing how to introduce evidence with context, how to translate the meaning of evidence, and how to provide analysis. The specific areas of focus include:

Evidence is facts and details that support an argument. While you can use personal evidence and researched evidence in an essay, this tutorial will specifically focus on integrating quotations from research sources.

Still, the principles that you practice today are just as important when you’re integrating personal narratives, summaries of big ideas, and paraphrased concepts. You can apply these tools across the board.

To be integrated effectively, each piece of evidence must be:

Context is an explanation of the circumstances of a piece of text. Say you’re reading an argument and you see this quotation:

What do you need to know in order to understand what this means and how it fits into the argument? Right away you know that this needs a citation:

Now you have an APA-style, in-text citation, which is a good start for context. But does that citation tell you much about Smith’s argument? You don’t know who Smith is or why this is a worthwhile piece of evidence. Answering those questions in brief is the main purpose of context.

Notice that as a reader, you now know who Smith is and why she is a worthy, valid source, making this a much more convincing appeal to ethos. Using the author’s name like this is called a signal phrase, which is a phrase proceeding a quotation that signals the author of the quoted text.

Context can also help you make sentences, including quotations, clearer. This means you could take the following quotation: 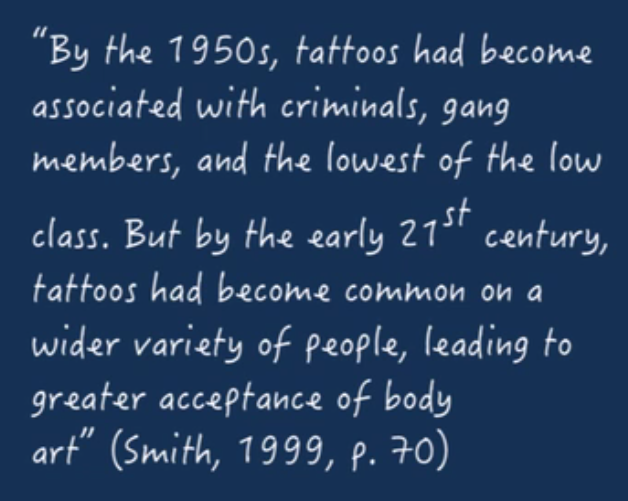 and then use context to create this much more specific sentence: 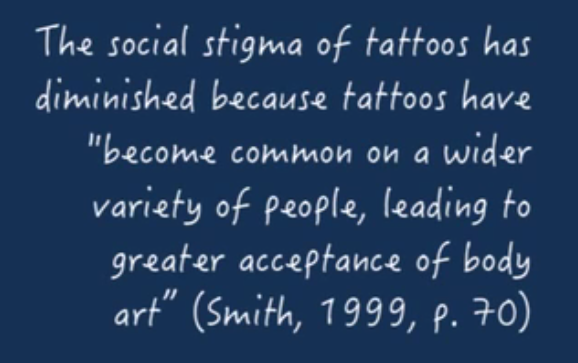 Because you’re integrating with clear context, you’re able to only use the part of the quotation that’s necessary to make your point; you’ve cut out everything else that could be distracting for your readers.

You don’t have to quote an author’s entire sentence. You can select the portion that is most important for you, as long as you don’t change the author’s original meaning.

The overall goal of context, as you can see in these two examples, is to give a brief introduction to the author, the work being cited, or the ideas being quoted. This should be very brief, meaning no more than a sentence or so.

An explanation of the circumstances of a piece of text.

A phrase preceding a quotation that signals the author of the quoted text.

Next, you need translation. When you’re translating, you’re telling your readers what you think the quotation means. This is important because two readers can interpret the same passage in two different ways, but you really want each reader to interpret that passage the way you have.

Thus, after you give a quotation, you can say something such as “This means that,” followed by a restating of the quotation in your own words.

Here you have a paragraph presenting some important data:

You can see the context and two different quotations. But what does this all mean? You need a translation sentence here, which might look something like this:

That one little sentence assures that your readers will know exactly what you think this evidence means. Therefore, translation is especially important if you”re presenting lots of technical, complex, or very detailed evidence that you need to make sure your readers understand.

Telling readers what a text means; interpreting a quotation.

Analysis is the most important part, as it is detailed explanations of an idea and interpretations of its intended meaning within a piece of writing. Analysis is where you say how a piece of evidence supports your main point.

The thesis statement of the following paragraph appears highlighted in black at the bottom:

How do the sentences in this short paragraph support that main point? Right now you could make a lot of guesses, but as a reader, you don’t yet know exactly how this evidence proves that employee dress codes shouldn’t include prohibitions on tattoos.

If you were writing this essay, you wouldn’t have convinced your readers to believe your side yet. What you would need to convince them is analysis. A nice way to begin your analysis is with the word “therefore.” That might look something like this:

Detailed explanations of an idea and interpretations of its intended meaning within a piece of writing; showing how a piece of evidence supports your main point.

To see how these three principles (context, translation, and analysis) work together, it’s helpful to know how to locate them in a short piece of writing.

try it
Take a moment to read the following short paragraph, making note of the context, translation, and analysis that you see. Then decide, based on this paragraph, what you think the main point of the essay is.

For the main point, you probably wrote something such as “Workplaces should be allowed to prohibit tattoos in employee dress codes.” To get to that answer, you can break down the paragraph by focusing on each principle.

In the context, notice that the evidence is introduced a little differently. The essay is making an argument against tattoos. Thus, the context places emphasis on a particular aspect of this quotation. You can see, then, that the same evidence can be used to support different arguments.

Likewise, the translation points out the long history of negative associations with tattoos. This assures that readers will focus on the many years when tattoos were taboo, and not on the recent change in their status.

Finally, the analysis shows how these ongoing negative associations might hurt businesses. Overall then, this paragraph uses the same evidence as an opposing argument might, but by providing clear context, translation, and analysis, it makes a convincing argument for its particular side.

summary
In this tutorial, you learned that there are three main principles for integrating evidence successfully into an essay: Context provides an explanation of the circumstances of a piece of text, and helps make sentences and quotations clearer; translation provides an explanation of what you think the quotation means, and ensures that your readers interpret the passage the same way you do; analysis provides detailed explanations of an idea and interpretations of its intended meaning, and shows how a piece of evidence supports your main point.

You then learned how these evidence principles work in practice by looking at the way they help you understand what the main point of an essay is.

Detailed explanations of an idea and interpretations of its intended meaning within a piece of writing; showing how a piece of evidence supports your main point.

An explanation of the circumstances of a piece of text.

A phrase preceding a quotation that signals the author of the quoted text.

Telling readers what a text means; interpreting a quotation.