(more)
See More
Tutorial
what's covered
This tutorial will cover analysis trade barriers. We will discuss how nations benefit from trade when they are fully employed and specialize according to comparative advantage, as well as the argument for trade barriers that arise when an economy is not fully employed.

If you recall, the key idea about gains from trade is that trade allows countries to enjoy more of both goods being traded, and allows them to move beyond their previous resource and productivity constraints.

Both goods can be produced at the lowest opportunity cost, which is the sacrifice made by choosing one value over another, or the value of the foregone opportunity.

We decide who produces what based on comparative advantage, which deals with this concept of opportunity cost, or what we give up.

Whenever the United States decides to devote resources, like land, labor, and capital, to producing textiles, we give up the opportunity to use those resources to produce something else, like cars. Therefore, what is given up is our opportunity cost.

Comparative advantage, then, is essentially an advantage conferred with a country to one good's production relative to another.

hint
Another way of thinking of comparative advantage is, "Who gives up less?"

When countries specialize in the goods or services for which they have the lower opportunity cost--meaning they enjoy a comparative advantage--then both countries will benefit.

For example, if the United States decided to devote their resources to produces textiles instead of cars, for instance, we give up a lot more in terms of cars than Mexico would, considering the technology and the skill level of our workforce compared to that of Mexico. In this case, Mexico would enjoy the comparative advantage in textiles, because they do not give up as much when they devote their resources to textile production. The United States, then, would enjoy the comparative advantage in cars.

The sacrifice made by choosing one value or opportunity over another; the value of the forgone opportunity

2. The Debate Over Free Trade

Theoretically, free trade benefits all countries. However, not everyone agrees.

There are a variety of arguments that have been presented in the media for trade barriers (which we will cover in another section), such as:

Remember, the basis for free trade was that both nations benefit when specializing in whatever they enjoy the comparative advantage.

However, the advantages and gains from trade were calculated based upon scenarios assuming full employment of resources in both nations.

Full employment is defined as equal to the point at which an economy exhibits a natural rate of unemployment, usually around 5%. It occurs when the economy is at its long-run supply capacity.

A production possibility frontier, or PPF, shows the maximum combination of two goods that can be produced when an economy's resources are being utilized. 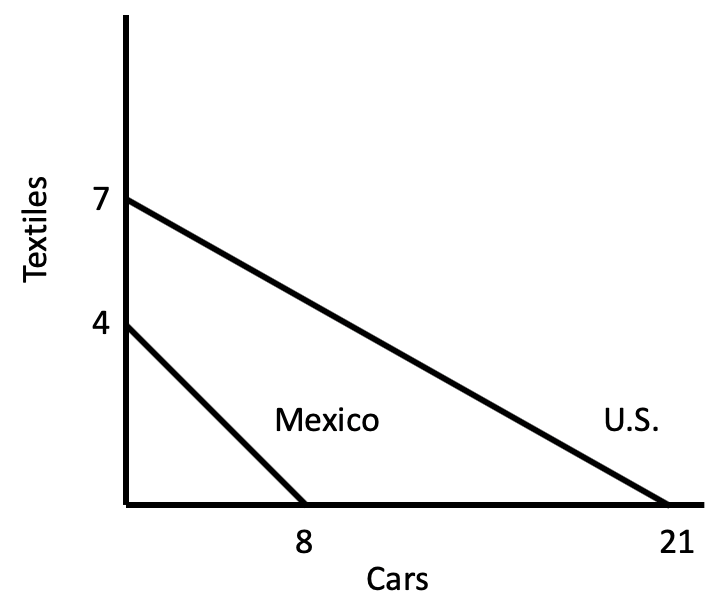 The x-intercept shows how many cars can be produced when all resources are devoted to car production. In this case, it is 21 for the United States or eight for Mexico.

This PPF, then, shows a trade-off. It shows how many of one good we have to give up when we want one more of the other good.

For example, for every one textile that the United States decides to produce, they give up the ability to produce three cars. Why do they give up three cars? Because we are assuming that resources are fully utilized and fully employed, so f they want to produce one more textile, they will need to take resources out of cars and put it into textiles.

Defined as equal to the point at which an economy exhibits natural rate of unemployment; occurs when the economy is at its long-run supply capacity

However, what if the United States is in a recession? This would be represented by a production level somewhere inside the curve where they are not actually producing a maximum combination.

This means that some resources are unemployed, and the economy is operating at less than capacity. 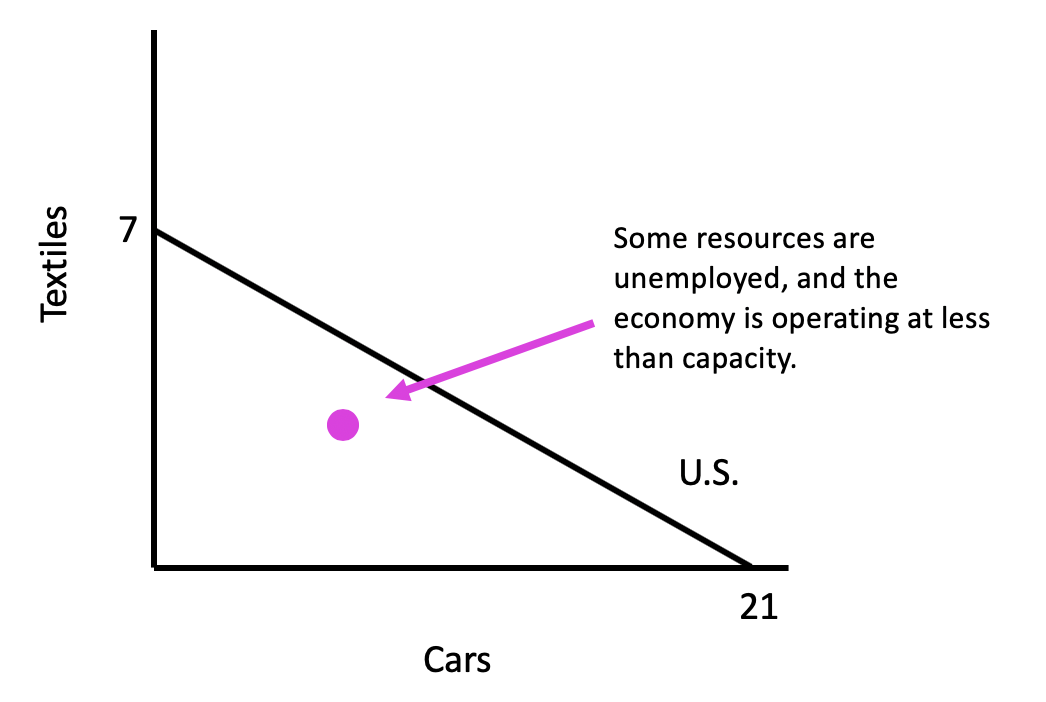 So, if we have people who are unemployed and not being utilized, and they want to work, we can employ them if we start producing textiles.

Since the idea of comparative advantage no longer applies, this situation presents an argument for a nation to set up trade barriers, which we will cover next.

Trade barriers focus on protecting a domestic industry from competition. They are defined as barriers to free-market pricing set in place to confer advantage of a country.

Examples of trade barriers include taxes and subsidies.

Barriers to free market pricing set in place to confer advantage of a country; examples include taxes and subsidies

5a. Pros and Cons


Are trade barriers good or bad? Well, there is much disagreement on the topic, but most people can agree that when an economy is fully employed, trade barriers are unnecessary and counterproductive. In keeping with the theories of comparative advantage and gains from trade:

However, with high unemployment, trade barriers can actually benefit a domestic economy by utilizing workers and other resources that are currently unemployed.

Critics, though, point out that trade barriers still have some issues. *Some say they are bad for the global economy overall.

summary
Today we learned that the basis for trade is that people and nations benefit when they specialize in whatever they enjoy a comparative advantage, lower opportunity cost, and trade. We learned that in an economy with full employment, gains from trade are obvious. However, when an economy has unemployment, it can benefit from trade barriers; one of the pros of trade barriers is that a domestic economy can utilize workers and other resources that are currently unemployed. We also learned, though, that the cons of trade barriers involve reducing the incentive for domestic firms to produce more efficiently.

Advantage conferred with a country to one good's production relative to another.

Defined as equal to the point at which an economy exhibits natural rate of unemployment; occurs when the economy is at its long-run supply capacity.

The sacrifice made by choosing one value or opportunity over another; the value of the forgone opportunity.

Barriers to free market pricing set in place to confer advantage of a country; examples include taxes and subsidies.