Or
Close Popup
+
Previous
1.1 The Historian's Practice
Next
1.3 The Lenses of History
Analyzing Primary Sources
Settling the Americas: 10,000BCE - 1700
0
of 0 possible points

Given a historical question, identify suitable primary and secondary sources.

Historians have an astonishing array of tools at their disposal when they are engaging in the history-making process. They can use evidence from a number of sources including, but not limited to: (a) oral interviews, (b) posters, (c) newspapers, (d) laws, (e) census data, (f) pictographs, (g) novels, (h) political cartoons, (i) maps, and (j) journals.

All of these represent examples of primary sources, or first-hand accounts/evidence from the time period that a historian is writing about or studying. Primary sources provide the foundation for any historical narrative.

First-hand accounts/evidence from the time period that a historian is writing about or studying.

For example, we know that the Salem Witch Trials occurred in late-17th-century New England. We know this because a significant number of primary sources related to the event exist, including: examinations of suspected witches, courtroom proceedings, and warrants for arrest. 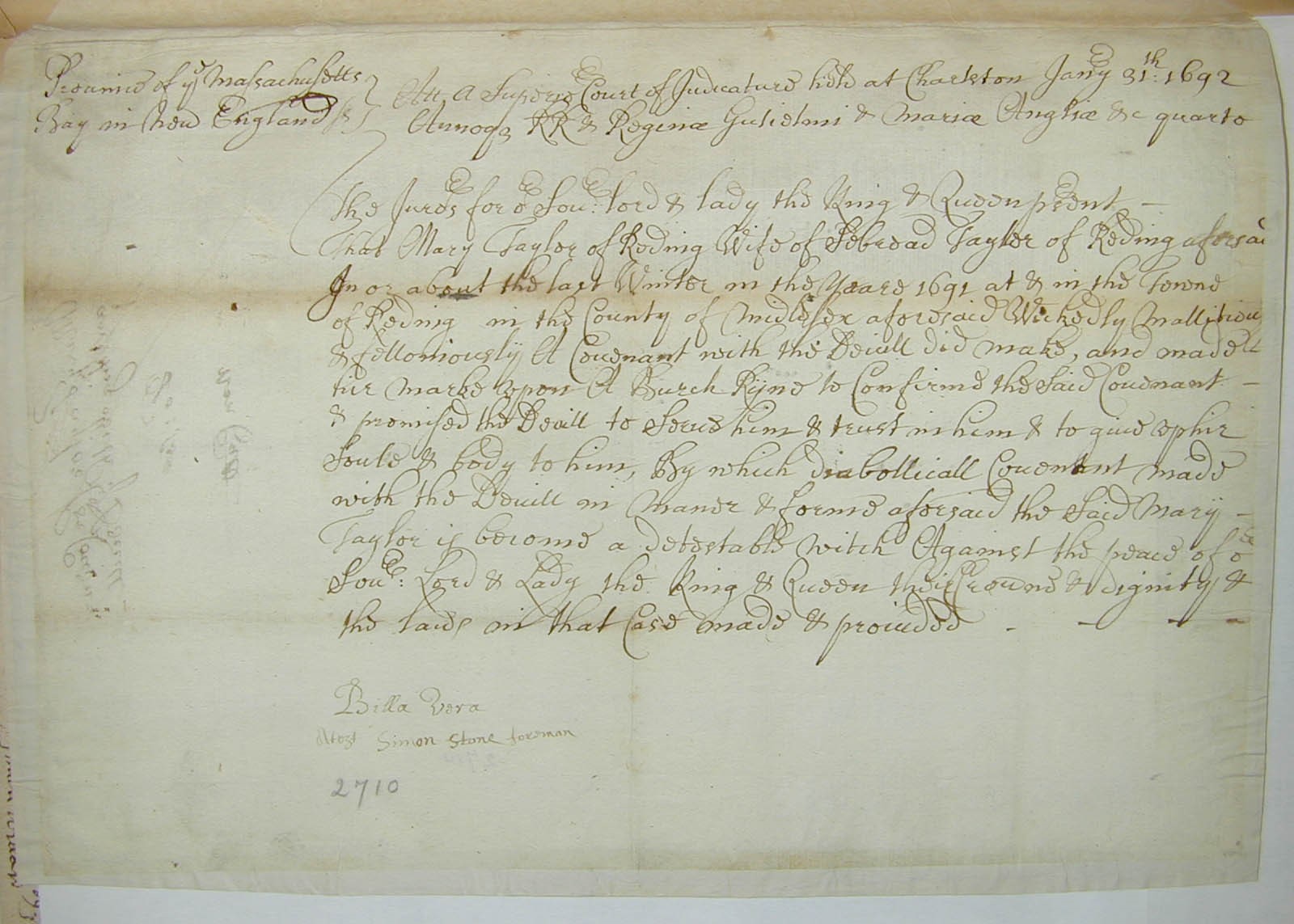 The above image shows the court indictment of Mary Taylor. Using this primary source, historians can conclude that: (a) Mary Taylor lived in Salem; (b) she lived there until at least 1692; and (c) town members believed she had formed a “covenant with the devil,” which amounted to an accusation of witchcraft. All of this information is contained in the above document.

Historians find and examine primary sources. Most importantly, they develop questions as they conduct research. For instance, why did town members accuse Taylor of making a “covenant with the devil?" What did such a phrase mean? Why was Mary Taylor singled out in the first place? These are just some of the questions a historian could develop while researching primary sources.

Pieces of work that contain analyses of primary sources that relate to past events.

Secondary sources are the textbooks and history books that historians use to provide context for what they are writing about. They are used for learning more about the time period being studied, fact-checking information being written about, and used as a jumping-off point to expand the historical period in question. For example, a historian might read Emerson W. Bakers’ A Storm of Witchcraft: The Salem Witch Trials and the American Experience before writing their own history of people like Mary Taylor.

think about it
Would this tutorial qualify as a secondary source or a primary source? Why?

2. How to Read a Primary Source

One reason that historians take secondary source work seriously is that primary sources cannot always be taken at face value. Sometimes there is evidence of bias in primary sources. Bias means: to have a particular perspective on something that is not objective, or without prejudice or persuasive intent. When an author creates a primary source, potential bias is created through the author’s: (a) background, (b) personal beliefs, (c) intended audience, and (d) purpose for writing. In addition to potential bias, sometimes the source can be read in different contexts. At times, there lacks a clear path on how to use a primary source. 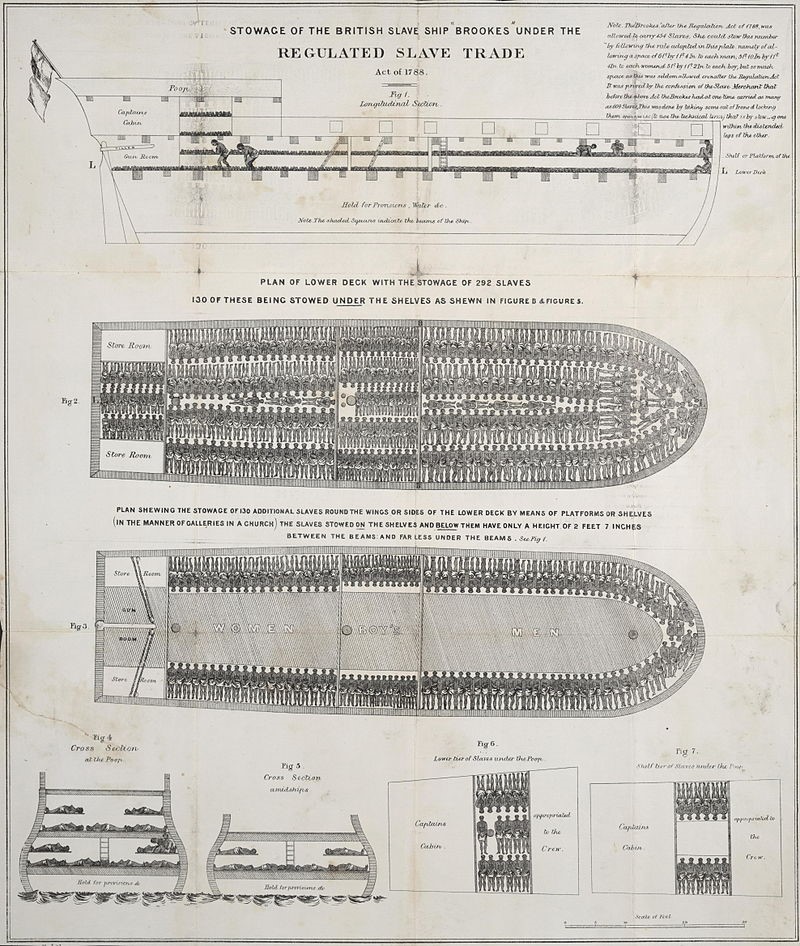 The above image shows the plans of a slave ship that would have been used during the American slave trade. The image appears as a straightforward and unbiased representation of one way that slaves were shipped across the Atlantic.

When put into the context of the slave trade, we can see the ways that slave traders tried to maximize profit by putting African men, women, and children in cramped and confined conditions. The image shows over 450 people being crammed into small and confined spaces. But we also know, from other evidence like ship manifests, that ships like this often left the shores of Africa with up to 600 slaves on board. The image does not provide this information, but when used with other pieces of evidence (from primary or secondary sources), a more accurate story can be told.

When examined without a critical eye, the image above depicts a tightly packed and inhumane means of slave transport that confirms the misery of the Middle Passage. But if you think about it critically or examine this primary source alongside other primary and secondary sources, a clearer picture emerges. On its own, this image underrepresents what actually occurred during the Atlantic slave trade. When combined with ship manifests, historians could derive estimates of how many Africans died while traveling the Middle Passage. Sometimes information on how a primary source was used is also helpful. For instance, the image above was widely published as anti-slavery propaganda. Thus, when viewed critically rather than at face value this image provided historians and the antislavery movement information about the slave trade.

Primary sources can be tricky and are definitely better served when thought about both critically and historically. There are a variety of ways that historians think about primary sources. The perspective might change depending upon whom you ask. There is, however, a straightforward and easy-to-remember way to approach primary sources.

During your early school years, you were probably asked to remember the six questions: who, what, when, where, why, and how. These are excellent starter questions to approach every primary source with. Whenever you come across a primary source, ask yourself:

There are many ways to ask these questions; the more questions you ask the more you are likely to learn. Some questions can be tricky (e.g., how questions). This is why secondary sources are so important. They help you understand the context of a source and familiarize you with the author’s perspective and voice. This makes these questions less complicated.

try it
Take this image and ask yourself all of the questions listed above. Use the internet to research possible answers. 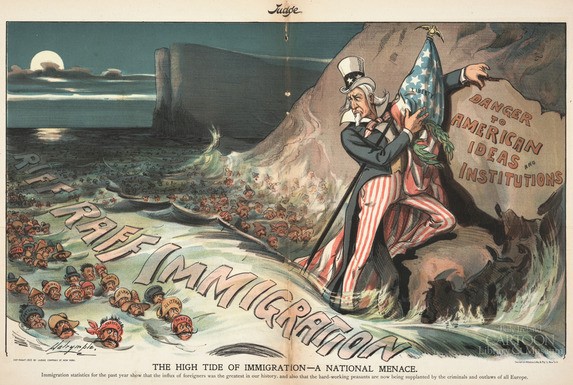 By applying the five w questions to primary and secondary sources, you will begin to think like a historian. Primary sources can be complex, so you should use historical and critical thinking skills when examining them. Critical thinking is a tricky concept to define, but it fundamentally means to create a clear, self-directed, and evidence-based judgment on a topic. In other words, when creating stories about the past the historian needs to: take a responsible approach, judge the evidence at hand, and create a story with the information.

Clear, self-directed, and evidence-based judgment on a topic.

One way that historians do this is by thinking historically about an event and its related primary sources. This can be accomplished through a variety of intellectual channels, but an easy one to remember is to think in terms of the five Cs, seen below (Andrews & Burke, 2007).

summary
This tutorial has covered the tools that historians use when creating stories about the past. They locate primary-source evidence from the past, critically examine evidence and ask questions, assess them alongside secondary sources other historians have created, and develop a narrative. Throughout the research and writing process, historians engage with questions related to the five Ws and the five Cs in order to account for bias and to write objective interpretations of the past.

Clear, self-directed, and evidence-based judgement on a topic

First-hand accounts/evidence from the time period that a historian is writing about or studying.

Pieces of work that contain analyses of primary sources that relate to events that have already taken place in the past.