Compute probability for normal models given a verbal description.

Tutorial
what's covered
This lesson discusses the application of z-scores. By the end of the lesson, you should be able to use a z-score table to determine the probability of values associated with a real-world variable that is normally distributed. This lesson covers:

With a normal distribution of a variable, the mean is the center of the distribution, while the standard deviation shows the level of variability that exists. When you know the value of a variable that is normally distributed, you can calculate the z-score by using the formula:

When you are interested in determining the probability of a specific value occurring, you can use a z-table to look up areas for a calculated z-score to determine the area under the curve of any normal distribution. This can tell you the chance of a value occurring. It should be noted that not all z-score tables are the same.

Take a look at the weight of newborn babies. Suppose that the mean weight of newborns is 7.5 pounds and the standard deviation is 1.25 pounds. Say you’re interested in determining the probability that a newborn weighs less than 6 pounds. How do you do that? 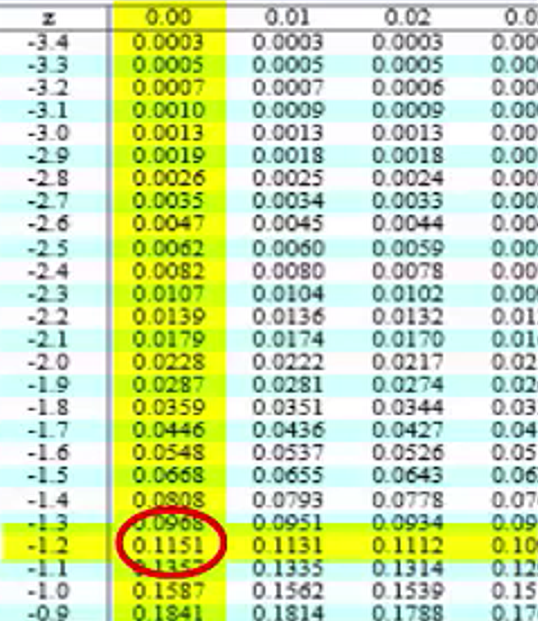 The point at which both the row and the column intersect one another indicates the probability. The intersection in this scenario is 0.1151. That tells you that the probability associated with the baby weighing less than 6 pounds is 0.1151.

What if you’re interested in looking at the probability that a newborn might weight more than 10 pounds? You could calculate the z-score much the same way you did with the previous calculation:

The same process is involved in looking at the z-table. Look at 2.0 and which row that entails. Since there are no numbers other than 0 to the right of the decimal point, you look at the very first column, which is the 0.00 column. Note, this table looks different from the one above. The z scores in the left column are negative instead of positive. For a full PDF on z-score tables, please see the attachment below this tutorial. 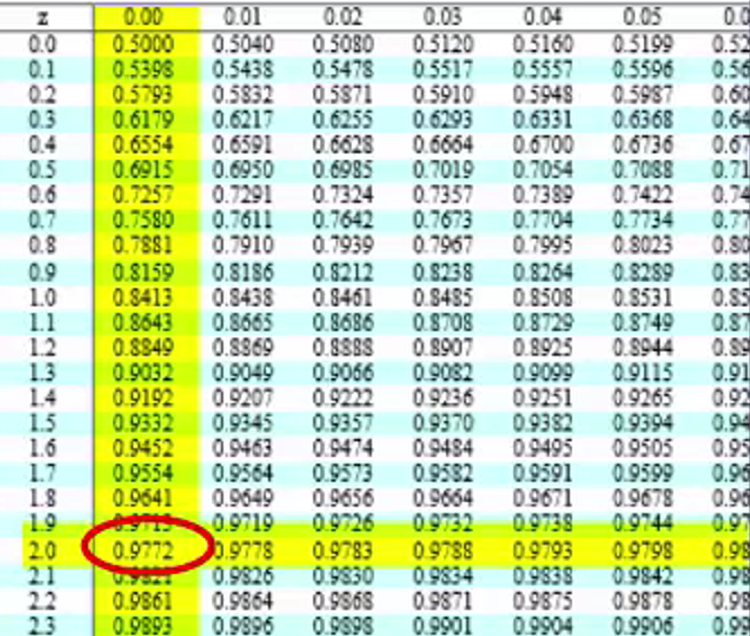 You wind up with a probability of 0.9772. Remember, you are trying to determine the probability that a newborn weighs more than 10 pounds. The value given to you here is telling you the area underneath the curve to the left of +2 standard deviations, as you see on the graph right here: 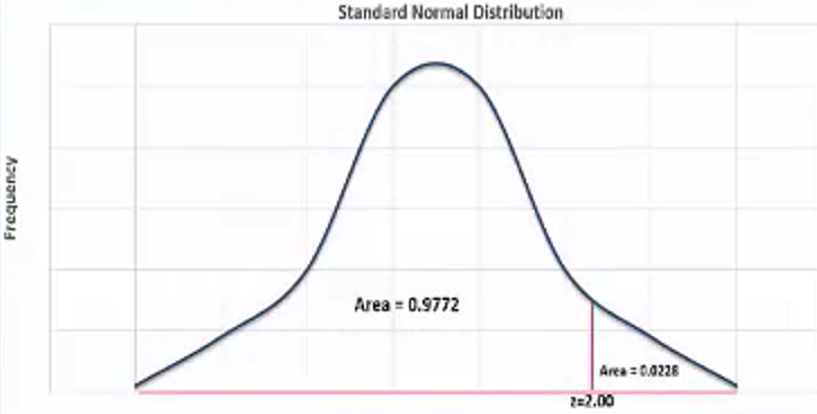 You will need to subtract that value from 1 to get the area that’s on the right-hand side of that line. The probability that a newborn would be greater than 10 pounds would be 1 minus 0.9772. The probability is equal to 0.0228.

Take a look at something a little bit different: the average lifespan of car tires. Suppose that the population mean is 60,000 miles, and the standard deviation has been determined to be 8,000 miles. Imagine you’re interested in determining the probability that a tire lasts less than 45,500 miles.

think about it
What is the first step? You need to calculate the z-score.

When you look that up on the z-table, remember that first you start with the -1.8. Since the second decimal point is a 0.01, you look at the second column. 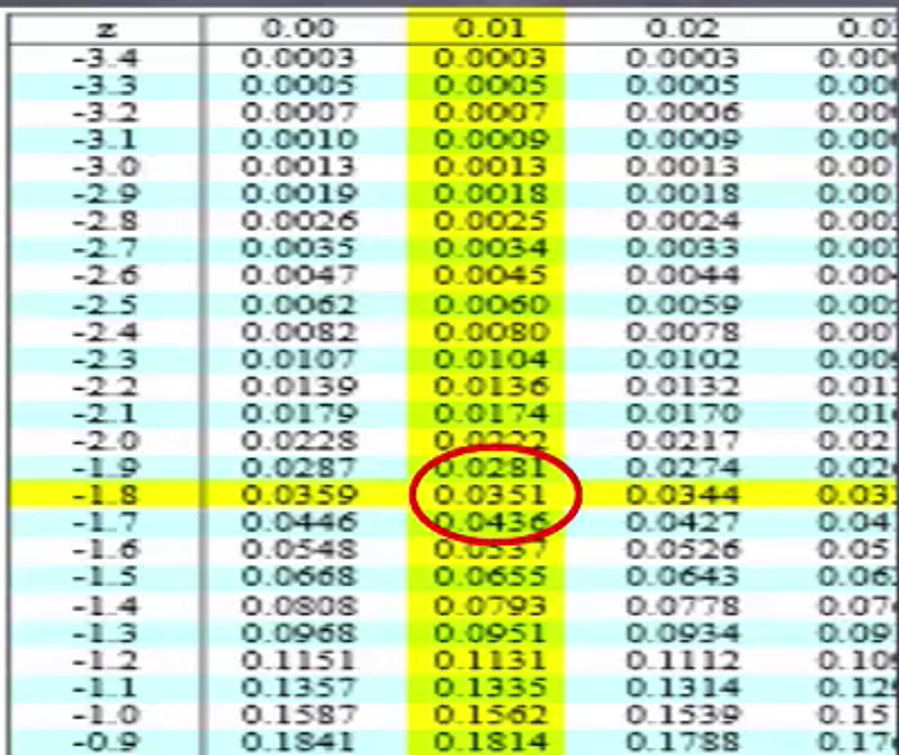 think about it
What does this tell you? It tells you the probability that a tire would last less than 45,500 miles would be 0.0351.

What if you were interested in determining the probability that a tire would have a lifespan greater than 80,300 miles?

try it
Calculate the z-score. Did you get a score of 2.54? If not, take a look at the formula in use to check your math. 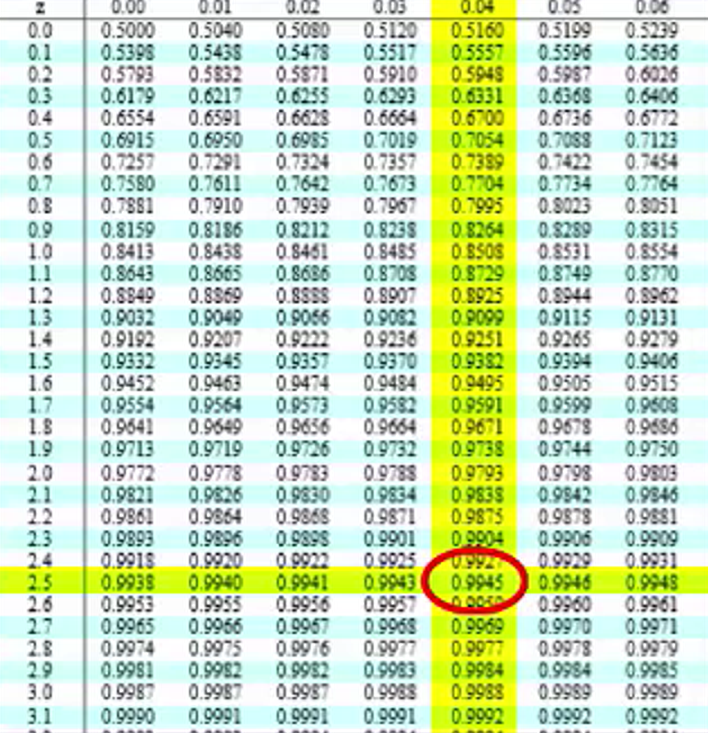 The probability provided to us is 0.9945. That’s not the answer you’re looking for here. That would be the area underneath the normal distribution curve up to 2.54 standard deviations. You’re interested in the area to the right of that, and so you would need to subtract that value from 1. When you do, you get a probability 0.0055. In other words, it is very unlikely in this particular case that a tire would have a lifespan greater than 80,300 miles.

summary
Today you looked at the application of z-scores to determine the probability of values associated with a real-world variable that is normally distributed. You also went through a couple of examples of an assumed normally distributed variable, both the weight of newborns and the lifespan of tires. Using these examples, you saw how you could figure out, using a z-table, the probability of a value being less than or greater than a particular number.