Tutorial
what's covered
In this tutorial, we will review three major components of Aristotle’s ethics: the Function Argument, the relevance of virtues to ethics, and the Doctrine of the Mean. We'll also examine some examples of these components.

This tutorial considers the application of Aristotle's ethics in four parts:

Recall that Aristotle’s Function Argument answers the question of what makes an act right or wrong, or where value comes from.

Aristotle’s Function Argument relates function to excellence. Aristotelian ethics answered this question: “What kind of person should I be?” — not the question that is now the norm in ethics: “How should I act?” Although these two questions are related, they differ as to which consideration is primary. Aristotle believed that character is primary. In his system of ethics, actions are evaluated based on how they inform character: Does this action make a person greedy? Smug? Generous? Brave?

Aristotle used biology to answer, “What kind of person should I be?” so that, when it is time to act, a person will act according to his or her character. The kind of character we should evaluate is based on what kind of thing we are (i.e., rational animals). By “rational,” Aristotle meant something very specific. Since reason is of our essence, it is what distinguishes humans from other animals. Human beings are the kind of thing that can think abstractly, not only of what to do in a specific case, but in general. Humans can plan the best ways to achieve our goals, which are focused on our happiness.

For this reason, deliberation is an essential part of rational choice. Humans deliberate on how to best achieve the good life, and on what kind of people they should be. Doing so tells us the way we should be, and the virtues we should have.

As he did in making the Function Argument, Aristotle used a specific example to establish a general claim: Any virtue becomes a vice when it is developed to the point of excess or deficiency. 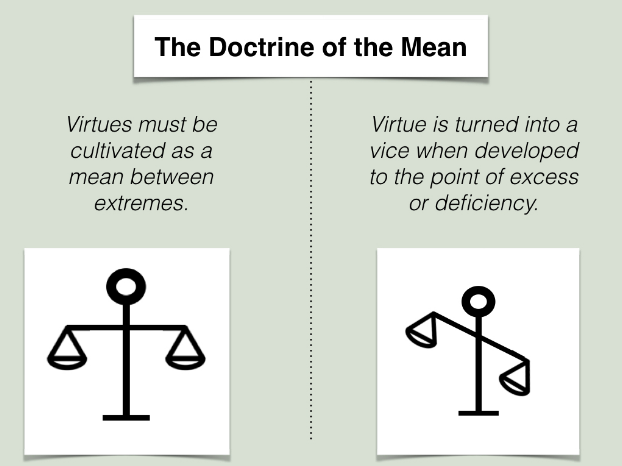 Let’s consider some real-life examples to which Aristotle’s ethics can be applied.

Let’s say that you’re terrified of heights. Your fear is so great that it prevents you from doing certain things. You cannot go mountain hiking with your friends, you refuse to fly, and even climbing steep flights of stairs makes you uneasy. Your fear of heights, because it is extreme, is a vice.

According to Aristotle, you should find the mean between your excessive fear (or cowardice), and too little fear (foolhardiness). Note that if you were insufficiently afraid of heights, you might be careless, which could cause you harm. Courage is the mean between these two extremes. You have enough fear of heights to keep you safe, but not so much that it prevents you from enjoying life.

brainstorm
What are the extremes of virtues like ambition, justice, love, confidence? What are other virtues for which you can identify extremes?

Consider the table below, which illustrates several virtues and vices. These are just a few examples; many others exist.

think about it
Can you think of other applications of Aristotle’s ethics? How can the Doctrine of the Mean be applied to your life? Consider some of your vices. How could you moderate them to turn them into Aristotelian virtues?

summary
Aristotle’s ethics are naturalistic, because he believed that the source of ethics comes from what kind of thing we are. Since humans are rational animals, we must cultivate the virtues conducive to the rational pursuit of happiness in a complete life. We develop virtues by manifesting them as a rational mean between extremes.
Attributions
Rating
Poor Fair OK Good Great
© 2020 SOPHIA Learning, LLC. SOPHIA is a registered trademark of SOPHIA Learning, LLC.