In this lesson you will review the components of SMART goals and develop a SMART goal connected to content. 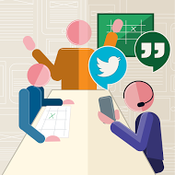 Hello, and thank you for joining me for Applying SMART Goals. By the end of today's tutorial, we will be able to answer the following essential questions. What are the components of SMART goals and how can I use this in my classroom?

Let's get started with a SMART goal overview. SMART is an acronym for specific, measurable, attainable, relevant, time-bound goals. These are goals that are used by the professional learning community to improve practice and student achievement. And we've talked about already how we can use learning walks and other observations that we have to set these goals based on student needs.

So what exactly is a SMART goal? Here's an example of one. During the 2014-2015 school year, 90% of students will improve their evidence based response writing skills as measured by an increase in one rubric level on the district spring common task as measured against fall district baselines.

Let's see if this goal meets the SMART acronym. Is it specific? It is extremely specific. It's specific to a year. It's a specific to a number. It's specific as to what they want their students to do, in this case, improve their evidence based response writing skills based on an increase of one on the rubric level, meaning it's based on a specific rubric. And then the measurement is taken from this bring common task compared to the fall common task. So definitely meets the specific guideline.

In terms of measurable, it's definitely measurable. They're looking for an increase of one rubric level, and they're looking for this increase for 90% of the students. It is attainable. 90% clearly for the school district is an attainable goal. I would go with choosing possibly a smaller percentage, but I think they make up for the fact that choosing such a large percentage by having the increase at a small level.

Is it relevant? It's definitely relevant. As we move towards common core, we're definitely looking at evidence-based response writing. So this is relevant to what's happening in schools today. And is it time-bound? Definitely. We're looking at this within the 2014-2015 school year. Therefore, this is a SMART goal.

On the other hand, this is not a SMART goal. Students will improve their writing skills. It's not specific. How are they going to improve their writing skills? It's not measurable. How are we going to measure whether or not we met this goal? Is it attainable? I don't know. It's very broad and general in the terms of which it's written. So I guess it's attainable based on who is evaluating the goal. But since there's no real way to evaluate it, it's possibly not attainable.

For specific, it's saying can members easily explain the goal? I would say yes, they can. Can you list specific actions necessary to achieve this goal? Definitely. At this school, every single grade level takes the ACT. So the current grade level we're looking at would be sophomores. We have their freshman ACT scores, and we want to see that they improve their English scores by a 20% net gain.

Is this goal measurable? It is measurable. We're looking at 70% of the students, and we're looking for a 20% net gain. How will we measure it? Again, through that net gain. You might be wondering, why did I choose net gain. Well, I chose it because we don't want to penalize students who already perform well.

I teach at a school for gifted children. And so we use net gain for all of our goals that we post. We will begin the year with students achieving at 100%. If I don't include those specific words net gain, I'll be penalized for the fact that someone who has a 100% and then achieves a 100% at the end of the year would technically look like they've made zero progress. But with net gain, it accounts for those high achieving students. So I just wanted to put that in there as an idea for you guys moving forward.

What is the specific number associated with achieving this goal? We have one. It's the 20% net gain. What will you do if you are struggling to meet this goal? I'm going to do a couple of little checkpoints throughout the year, a couple of little pre-test and post-test. And I'm going to use some ACT prep. I'm not going to do an entire unit on ACT prep. I'm going to incorporate this throughout the course of the year to look at the English skills that are tested on the ACT. So we're going to work on expanding our vocabulary. We're going to look at sentence correction. We're going to look at a passage correction as maybe a bell ringer at the beginning of each class period.

And who will measure, with what, and how often? We're going to have a couple of tests throughout the year to kind of get the temperature of the class as to where we're going moving forward, so we can make the changes necessary. I can measure it or I can have another person in my department or my building measure this by giving the test and grading the test. Since it's a standardized test, it's really easy to have anybody step in and do it.

And relevancy. Why have I selected this goal? I've selected this goal because ACT is really important to a lot of our students. The state of Louisiana where I teach requires every grade level to take the ACT every year. It's one of the ways that they measure school performance. So we want the students to do well on it to earn scholarships for school. We want them to have exposure to it as often as possible and as early as possible. And we also want their results on the ACT to reflect what we're doing in the classroom and what we're achieving at the school.

And is it time-bound? What are the check points along the way? We have a couple of the mini assessments built in throughout the year. What is to be accomplished by each checkpoint and by whom? At each checkpoint, we just want make sure students are moving towards their goal. And this is looked at by the teacher.

And then what's the final deadline that must be met? It's going to be that end of the year ACT test, which is actually at least for me given in March. And who is responsible? Both this teacher and the students, as well as the department head.

So let's reflect. What are some strengths and weaknesses you see with setting SMART goals? And reflect on your classroom goals. Do they fit the SMART model?

So today, we discussed what the components of SMART goals are and how we can use this. Now it's your turn to apply what you've learned in this video. The Additional Resources section will be super helpful. This section is designed to help you discover useful ways to apply what you've learned here. Each link includes a brief description, so you can easily target the resources you want. Thank you for joining me and happy.

This presentation from the Eugene School District includes a clear overview with some examples of how to apply SMART goals to improve and inform instruction. The presentation breaks the development, implementation, and analysis of the goals into easy to follow steps.
http://www.4j.lane.edu/wp-content/uploads/2013/04/4J_HR_TE_Student-Learning-Goals-Objective-Goals1-2.pdf

This is a great resource to use as a reference sheet when you are developing your own SMART goals.
http://www.cr.k12.ia.us/assets/1/6/2017-18_Admin_ILPDP.pdf