Tutorial
what's covered
Anyone who wants to relate ethics to how humans should be (in the biological sense) will confront — and use — Aristotelian ethics. As a result, many neo-Aristotelians are involved in the field of contemporary ethics. In this tutorial, we will investigate three major components of Aristotle’s ethics: the Function Argument, the relevance of virtues to ethics, and the Doctrine of the Mean.

try it
Take several examples of something you know can be good, but isn’t always good. Is it true that the difference between times when the thing is good, and times when it is not good, is whether it fulfills its function well (or not)?

When considering examples (e.g., a good meal, a good cell phone), it quickly becomes clear that a thing’s function is tied to what kind of thing it is. Function follows essence. What makes a thing what it is tells us how that thing should be.

Aristotle’s Function Argument connects function to excellence. The word Aristotle used is “arête,” which is translated as "virtue" or "personal excellence." Aristotelian ethics is concerned with answering this question — “What kind of person should I be?” — rather than “How should I act?” (the question that is now the norm in ethics). These two questions are clearly related, but differ in their primary consideration. For Aristotle, character was primary. Actions are evaluated based on how they inform your character (e.g., Does an action make you greedy? Smug? Generous? Brave?).

Aristotle used biology to answer “What kind of person should I be?” in a way that, when we must act, we will act according to our individual characters. The kind of character to be evaluated is based on what kind of thing we are (i.e., rational animals). By “rational,” Aristotle meant something very specific. Since rational is of our essence, it is what separates humans from other animals. Humans are the kind of thing that can think abstractly (not just of what to do in a particular case, but in general). Humans can plan the best ways to achieve their goals (which are focused on their happiness).

For this reason, an essential component of rational choice is deliberation. We deliberate on how we can best achieve the good life, and on what kind of person each of us should be. This tells us the way we should be, and the virtues we should have.

Once we have determined the virtues we must cultivate, and have cultivated them, we must begin to manifest them. This is not easy, because virtue comes in degrees. For example, courage is a virtue we should cultivate. Rational deliberation indicates that we should be courageous people, as part of human excellence. However, we must determine how courageous we should be.

To answer this question, Aristotle provided the Doctrine of the Mean. Like other Aristotelian arguments, it begins with something we know: First, take something we know can be a virtue, such as courage. Next, ask "when is courage not a virtue (i.e., when is it a vice)?" Too little courage and you are a coward. Too much courage and you are foolhardy. (Note that there is nothing admirable about picking fights with tough people, or taking other unnecessary risks.) Courage, therefore, must be cultivated as a mean between extremes.

make the connection
In mathematics, the mean is the average of a set of numbers. In Aristotle’s Doctrine of the Mean, it is defined differently, but it indicates a somewhat similar concept: an average or midpoint between two extremes.

As with the Function Argument, Aristotle used a specific example for a general claim: Any virtue is turned into a vice when developed to the point of excess or deficiency. 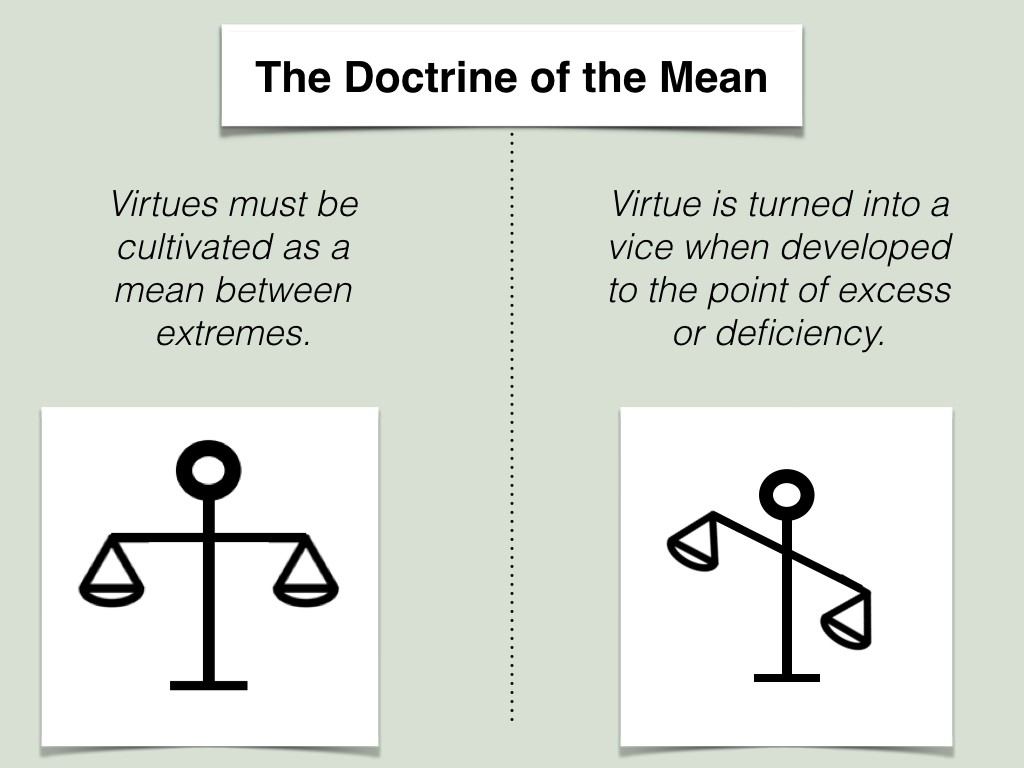 think about it
Think of some virtues (i.e., character traits of positive value). Are there any that do not become vices when practiced to excess? For example, justice becomes a vice when it excludes forgiveness. However, people can certainly be overly forgiving too.

Aristotle indicated that this ideal is a rational mean, not a numeric mean. What does this mean? Let's consider an example. It is a virtue to be financially productive (i.e., the trait involved in becoming rich)? What’s the least I can earn in a year? Zero. What is the most? Currently, the record is about $12.7 billion. The numeric mean of financial productivity would be a trait that leads to earning $6.35 billion dollars a year, but it would be absurd to make this a personal goal. It is clearly excessive. What did Aristotle mean by "rational mean?" To answer, recall rational deliberation, and the process involved in determining what kind of person I should be. If I dedicate too much of my effort to developing my financial productivity, I will fall short of the good life because other aspects of my life will suffer. I will not expend enough effort to develop other positive traits.

summary
Aristotle’s ethics are naturalistic, because he believed that the kind of thing we are was the source of ethics. Since humans are rational animals, we must cultivate the virtues conducive to the rational pursuit of happiness in a complete life. We develop virtues by manifesting them as a rational mean between extremes.
Attributions
Rating
Poor Fair OK Good Great
© 2021 SOPHIA Learning, LLC. SOPHIA is a registered trademark of SOPHIA Learning, LLC.