Tutorial
what's covered
American participation in World War II effectively ended the Great Depression. Mobilizing for war and procuring essential war materiel required partnerships between private business and the federal government. The “arsenal of democracy” was American big business, which provided everything that the Allies needed — and plenty of it.

This tutorial examines the “arsenal of democracy” from an economic perspective in three parts:

1. Government, Business, and the Economy

Although the United States sought to avoid military intervention as World War II began, the country was not entirely unprepared for war when the Japanese attacked Pearl Harbor on December 7, 1941.

The production of armaments and other war materiel by American factories increased between 1939 and 1941, as the U.S. provided support to Great Britain according to the “cash and carry” policy and the Lend-Lease Act of 1941.

However, when the Japanese attacked Pearl Harbor, most factories were producing automobiles, appliances, and other civilian goods. Many people doubted that these manufacturers would be able to convert their facilities to wartime production.

President Roosevelt had sometimes expressed frustration and impatience with business leaders when he attempted to implement New Deal reforms, but he recognized that their support was necessary for the U.S. to produce armaments for the Allies, and to win the war.

To encourage their cooperation, the federal government entered into defense contracts with many corporations. To entice them to convert to wartime production, the government assumed most of the costs associated with development and production, and guaranteed a profit on the sale of the products. The defense contracts also exempted the manufacturers from antitrust regulations while wartime mobilization was in effect.

Defense contracts were almost always awarded to large corporations that were capable of producing war materiel on a large scale. These contracts provided the foundation of what would later be called the military-industrial complex.

The matrix of relationships between the federal government, defense industries, and universities; all of which benefited from increased investment in weapons research and other war-related initiatives

During World War II, the largest 100 corporations in the United States received approximately 70 percent of the defense contracts issued by the federal government.

The profit earned by corporations during the war were enormous, especially since many of them had struggled during the Great Depression. Corporate profits in the U.S. rose from $6.4 billion in 1940 to nearly $11 billion in 1944.

To pay for these contracts and to stimulate the economy, the federal government increased taxes and required employers to implement a tax-withholding system that deducted taxes from employees’ paychecks. This was the beginning of the income tax system that is in effect today.

The government also encouraged Americans to invest in war bonds. More than $185 billion worth of bonds were purchased during World War II.

The federal government’s sale of war bonds, and other programs based on borrowing, are examples of deficit spending to stimulate the economy and pay for the war effort.

British economist John Maynard Keynes was one of the most notable advocates of deficit spending. He claimed that it was necessary in an advanced industrial economy to maintain production and employment levels while encouraging consumer spending. President Roosevelt relied on this strategy during the New Deal when he asked Congress to fund work relief programs and public works projects. The need to increase production during World War II required the government to engage in deficit spending to spur investment, provide jobs, and ensure that the economy operated at full capacity.

did you know
In 1939, the federal budget was $9 billion. In 1945, it was $100 billion. The Gross National Product (GNP) also doubled during this period. The GNP is one way that economists measure the value of the goods that an economy produces.

In addition to issuing defense contracts and deficit spending, the federal government attempted to regulate the economy through the Office of Price Administration (OPA).

To combat inflation (i.e., increasing prices), the OPA set a ceiling, or maximum, price for all goods — with the exception of agricultural commodities. The OPA also rationed some goods, to ensure that American soldiers were well-supplied and well-fed.

Ration booklets — books of coupons to be used to buy limited amounts of meat, coffee, butter, sugar, and other foods that were essential for the war effort — were issued to all citizens. Other items that were rationed included shoes, liquor, cigarettes, and gasoline.

did you know
With few exceptions (e.g., doctors), Americans were only allowed to drive their automobiles on certain days of the week during World War II.

Wartime rationing represented a dramatic expansion of government authority into the lives of Americans. It also contributed to a sense of shared sacrifice among citizens. Understanding the gravity of the wartime emergency, and believing that their sacrifices were temporary, most Americans endured rationing willingly.

did you know
Wartime publications such as the Betty Crocker cookbook, Your Share, provided instructions on how to prepare meals with rationed food items.

Americans also supported the war effort in other ways. Encouraged by federal advertising campaigns, some planted "victory gardens" to grow their own food in backyards and vacant lots. 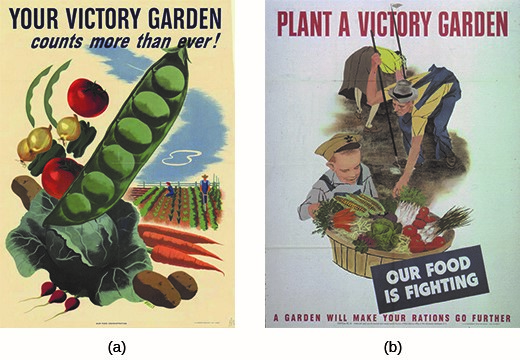 Housewives saved cooking fats, which were used to produce explosives.

Defense contracts and deficit spending stimulated the economy and convinced many corporations to convert to wartime production. When doing so, they used mass production methods that were already widely used, especially scientific management and the assembly line.

A management system in which manufacturing tasks are divided into short, repetitive segments to maximize efficiency and profitability

Mass production enabled the “arsenal of democracy” to focus on the quantity of goods it produced. The production of two vehicles that were central to the American war effort provide examples of this process.

The “Liberty Ship” was the primary cargo vessel used by American and British fleets during the war. 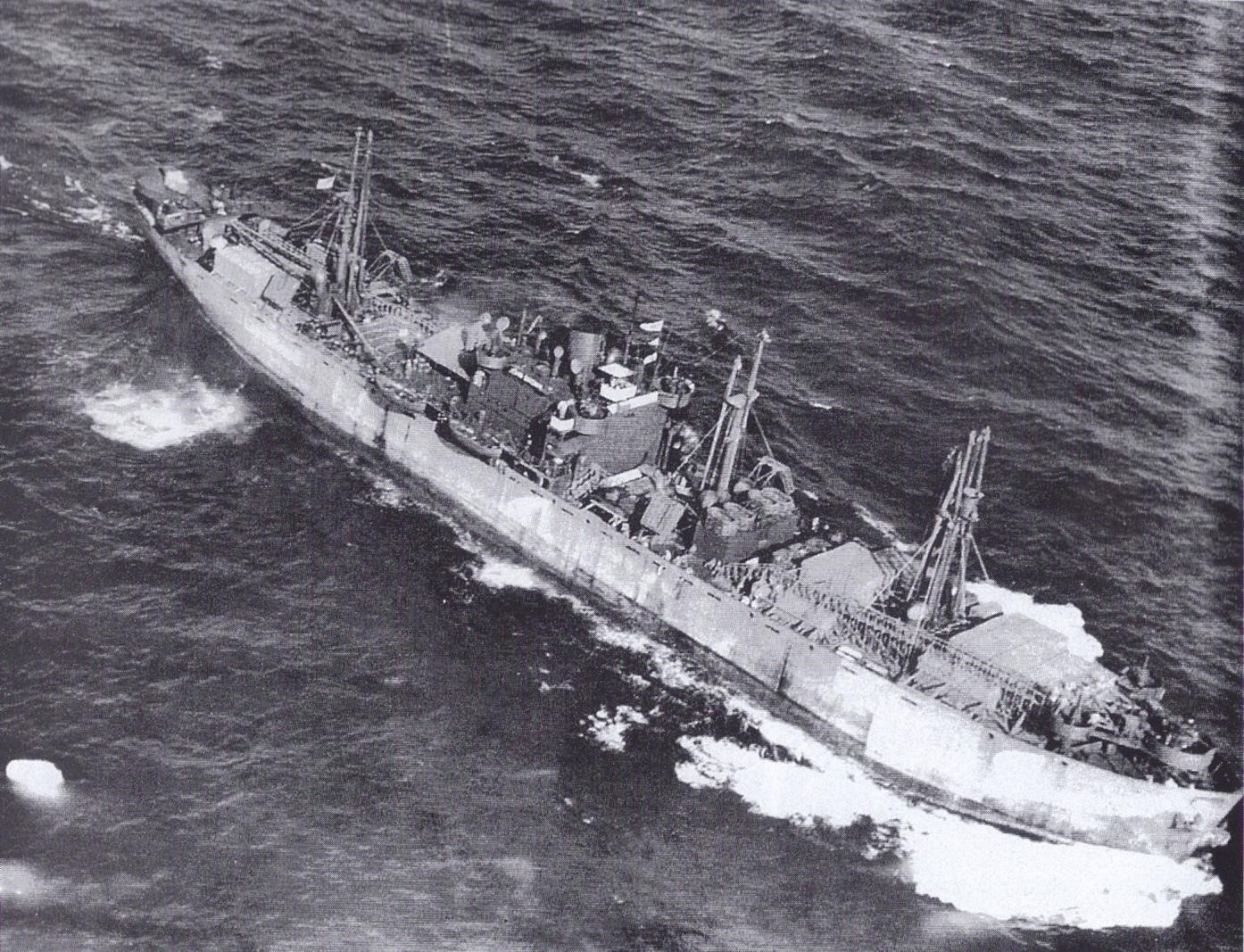 Liberty Ships were valuable to the Allied war effort because of the large amount of materiel they could transport.

The hull of a Liberty Ship was constructed of over 3,000 tons of steel. Before the U.S. entered the war, it took almost a year to build a Liberty Ship. When the war started, and government orders for ships increased, Henry Kaiser, a businessman who owned shipyards in Richmond, California, encouraged his workers to manufacture Liberty Ships in record time.

did you know
Liberty Ships were sometimes referred to as “the Model T of the seas”, in reference to the first mass-produced automobile.

In 1939, automobile manufacturer Henry Ford began construction of an enormous factory southwest of Detroit, along a creek named Willow Run. Ford built the Willow Run factory to enable his company to manufacture more automobiles. When the U.S. entered the war, however, the federal government entered into contracts with Ford’s company to build military vehicles. The most notable of these was the B-24 Bomber. 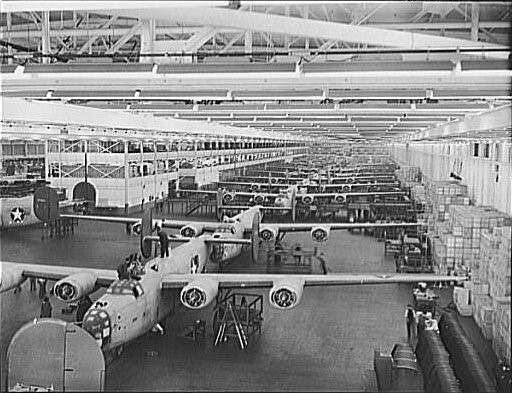 Like the Liberty Ship, the B-24 Bomber became a mainstay of the air force. More B-24s were produced than any other kind of American aircraft.

The construction of B-24 Bombers made use of Ford’s assembly line process on a massive scale. By the end of the war, Willow Run had produced 8,500 B-24s, all of them built on an assembly line over a mile long.

Kaiser and Ford applied the principles of scientific management and the assembly line to produce such great numbers of vehicles. They broke down the manufacturing process into small, repetitive tasks. Each worker was assigned to a small group, which performed the same job over and over.

As a result of the organization of workers for mass production, the amount of materiel produced by the “arsenal of democracy” during World War II was staggering, as shown in the chart below: 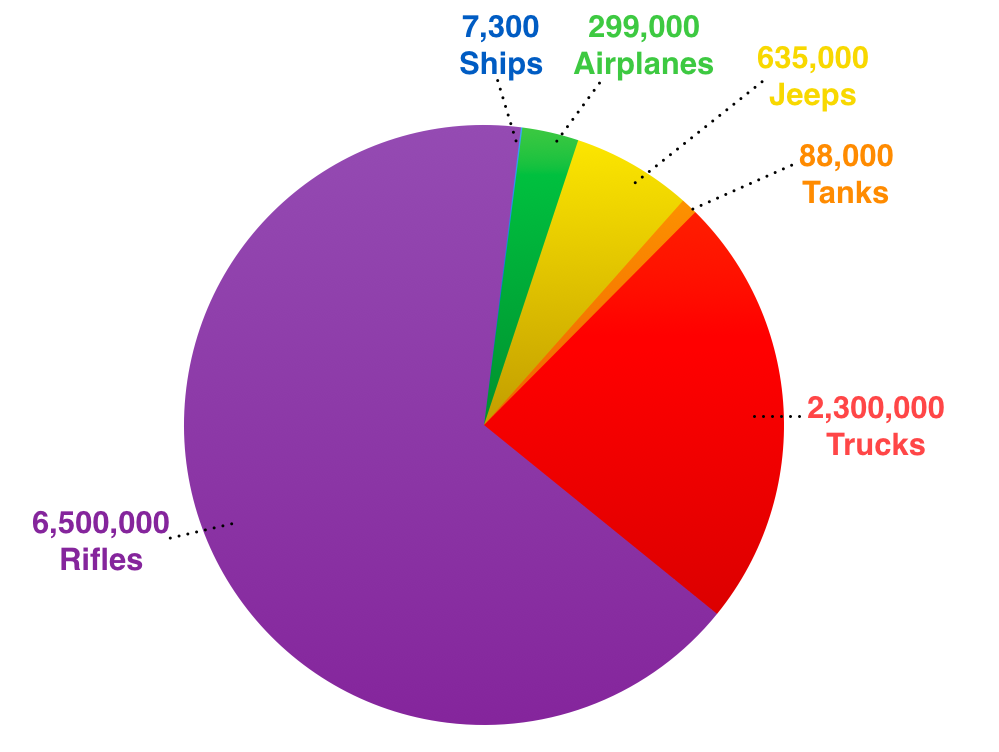 These production levels far exceed those achieved by Germany and Japan.

Although Americans made sacrifices during World War II, the partnerships between government and big business, federal spending, and wartime production, re-established a prosperous consumer economy in the U.S.

During World War II, the average income per family increased.

The American economy was incredibly diverse and productive during World War II. Henry Ford’s Willow Run facility and other American factories produced tanks, airplanes, rifles, and other armaments. Civilians in New York and other cities were able to shop at Macy’s and other department stores. Moreover, civilians and soldiers alike could consume the same goods, including Wrigley’s chewing gum and Coca-Cola.

Civilians experienced the restrictions of rationing and price controls but, unlike the people of Europe and Asia, Americans did not live in a war zone. For the first time since the beginning of the Great Depression, many Americans experienced life with few deprivations.

The combination of wartime production and prosperity had a profound impact on the post-war period. Americans wanted affluence to be permanent, and looked to the federal government (and its partnerships with big business) to secure it.

summary
In economic terms, the “arsenal of democracy” required a partnership between government and big business. The federal government also engaged in deficit spending, and regulated the economy through price controls and rationing, to ensure stability and maximum production. Henry Kaiser, Henry Ford, and other beneficiaries of generous defense contracts applied mass production to manufacturing on an enormous scale. Although Americans were subject to rationing and other restrictions, they experienced little deprivation as the wartime economy established the foundations of an affluent postwar society.

federal office that regulated the price and availability of goods during World War II.

a manufacturing process that allowed workers to stay in one place as the work came to them.

government spending that exceeds revenue and is financed through borrowing rather than from taxation.

the matrix of relationships between the federal government, defense industries, and universities; all of whom benefited from increased investment in weapons research and other war-related initiatives.

a management style that encouraged the division of manufacturing tasks into short, repetitive segments in order to maximize efficiency and profitability.

Democratic U.S president from 1933 until his death in 1945, who was elected for an unprecedented four terms; led the United States through the Great Depression and World War II; member of the Allied Powers’ “Big Three” leaders.

American automaker and industrial leader who adapted the assembly line process on a massive scale to aid the production of airplanes and other vehicles during World War II.

British economist and advocate for deficit spending, a economic implemented by the U.S. government during and after World War II.