Recognize the artistic styles of Baroque architecture in New Spain.

Tutorial
what's covered
This tutorial covers Baroque architecture in New Spain, or the Americas. By the end this lesson, you’ll be able to identify and define today’s key terms, briefly explain the Spanish conquest and colonization of the New World, explain how Catholic churches became important symbols of both Spanish and Catholic authority, and identify examples of Spanish Baroque architecture in New Spain by stylistic characteristics. This will be accomplished through the exploration of:

The architecture that you will be looking at today dates from 1562 to 1625. All of the churches that you will be learning about today, with the exception of two non-required examples from Spain, are found within modern-day Mexico.

Colonization may sound like a friendly word at first, but in this case, it involves the displacement of an existing civilization and accompanying enforcement of another civilization’s will on the indigenous population. There’s a reason it’s called the Spanish Conquest. You can see the extent of Spain’s colonization at its peak in the map below. 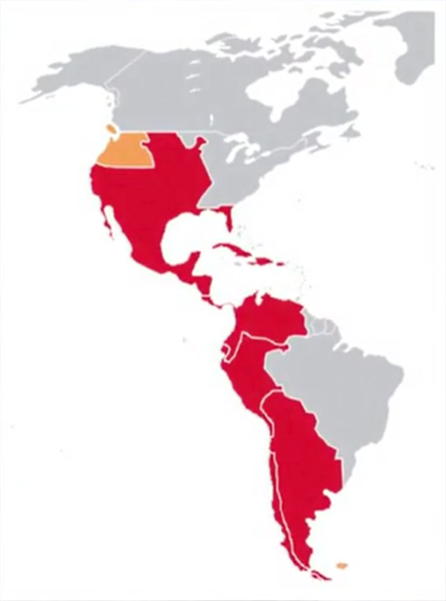 Although this period is looked upon as the golden era of Spain because of this extensive colonization, it marks a very dark time for the native cultures, such as the Aztec, Inca, and Maya, that were conquered in the Americas by the Spanish in the name of her king and the Catholic Church.

This influence reverberates today—from Mexico through Argentina and South America, this area is the largest region of Spanish speakers on the planet. It also marks the largest, and arguably most devout, Catholic region and population in the world.

People who are native to a certain place

The subjugation of another group, in this case the New World by Spain

The cultural and linguistic influences and blendings are very apparent in the people of Latin America today. Like any civilization that expands into other areas, the influence of Spanish art and architecture is apparent as well. Construction of churches was extremely important, given that Spain was one of the most devoutly Catholic countries of this time. Also, by Vatican decree—from the pope himself—Spain’s expansion was to coincide with the spread of Catholicism by conversion of conquered civilizations.

This is why the Spanish conquests and spread of Catholicism go hand in hand. Churches were a physical representation and reminder of the Church’s and Spain’s authority over the New World. The architectural influences on the churches that you’ll see today can be traced back to the Spanish churches in Europe. Just as the culture that developed out of this time became a mixture of native and Spanish cultures, the churches that were built here embody influences from continental Europe, as well as from the local people.

At the time of its initial construction in Spain, Valladolid Cathedral was located in one of Spain’s most important cities, Valladolid, home to Philip II and his court. It’s an example of Spanish Renaissance design.

Remember, periods such as the Renaissance and the Baroque occur at different times depending on the region and the rate of penetration. You can see the more simplified exterior of Valladolid contrasted to the noticeably more decorative façade of Jaén Cathedral, shown below, which is also an example of Spanish Renaissance design. Both of these would serve as important influences on the design of churches in the New World.

It’s a mixture of styles, most notably Baroque and Renaissance. It’s essentially a classical layout with Baroque decoration and ornamentation seen throughout the exterior and interior of the church (see below).

Here are a few additional views of the outside of the cathedral:

Shown below, one of the best examples of ultrabaroque can be seen in the elaborate ornamentation of the façade of the tabernacle, which is adjacent to the main cathedral structure.

hint
The dense ornamentation characteristic of ultrabaroque tends to work best when it’s affixed to a classical layout such as this, the juxtaposition of which is intended to create a trance-like effect or an impression of the glory of heaven.

The main church that contains the bishop’s throne

4b. Cathedral of San Ildefonso
The churches of New Spain incorporated elements of Spanish architecture, but possessed a much more varied mixture of styles in comparison to their European counterparts. For example, the Cathedral of San Ildefonso is largely Renaissance in its execution, particularly with its restrained and logical façade, dominated by the use of the rounded arch and overall simplicity in its design.

Interior elements are, again, simple in their overall concept, but there are Baroque elements, particularly in the altars, as well as examples of Gothic tracery on the sides of the nave.

did you know
The church itself is constructed from repurposed stones from a former Mayan temple and most likely built with Mayan slave labor—a very physical representation of the authority of Spain and the Church and subjugation of the native population to the will of the Spanish.

The austere-looking native brickwork serves as the perfect surface for the elaborate ornamentation of the façade and bell towers of this church.

You could make the argument that the contrast of these two styles creates a greater impression with the ornamentation, as if the entrance to the church truly marked a transitional point between the earthly and heavenly realms. It’s a style that, interestingly enough, corresponded to the Rococo in the rest of Europe, a style that was itself known for its similar level of ornamentation and detail.

In Latin America, a devotional painting that uses religious iconography from the Catholic Church

summary
Today you learned about Baroque architecture in New Spain, or the Americas. In addition to learning how to identify and define today’s key terms, you also learned how to briefly explain the Spanish Conquest and colonization of the New World. You learned how the Spanish churches in Europe influenced the art and architecture of the New World, especially given that the Catholic churches in New Spain represented important symbols of both Spanish and Catholic authority. Lastly, you learned how to identify examples of Spanish Baroque architecture in New Spain by examining the stylistic characteristics of several cathedrals built in Mexico.

The main church that contains the bishop's throne.

The subjugation of the New World by Spain.

People who are native to a certain place.

In Latin America, a devotional painting that uses religious iconography from the Catholic Church.