Or
Close Popup
+
Previous
2.3 The Townshend Acts and Protest
Next
2.5 Think About It: Is Taxation Un-American?
Boston Tea Party
The Road to Revolution: 1600 - 1783
0
of 0 possible points

(more)
See More
Tutorial
what's covered
An unlikely commodity — tea — played a pivotal role in a sequence of events that led to far greater consequences than those resulting from the Stamp Act (1765) or the Townshend Acts (1767). In 1773, colonists who had opposed these earlier measures directed their anger against the Tea Act. Parliament had again imposed taxes without representation. The colonists believed that the Tea Act was meant to pressure them into conceding their right to representation. They also resented the Empire’s monopoly on the sale of tea in the colonies.

This tutorial examines the causes and effects of the Boston Tea Party, one of the most celebrated moments in American history, in four parts:

Suspicion of Parliament remained high in the colonies, even after the partial repeal of the Townshend duties. This was especially true in port cities like Boston and New York, where British customs agents were a daily irritant, and a reminder of imperial power.

In public houses and town squares, people met and discussed politics. Among the works that provided topics for these discussions was John Locke’s Two Treatises of Government. Published almost a century earlier, it influenced opinions about the role of government in protecting life, liberty, and property. The Sons of Liberty provided fuel for debate by issuing propaganda whenever, in their view, Parliament overreached its authority.

Committees of correspondence were of particular importance during the colonial resistance to Parliament's taxation efforts. The committees emerged in Boston in 1764, to encourage opposition to the Currency and Sugar Acts. They also played an important role during the resistance against the Stamp Act.

By the early 1770s, committees of correspondence had formed throughout the colonies, enlisting between seven and eight thousand members. They identified potential enemies of the non-importation movement and other resistance efforts, exchanged ideas, and shared information. In times of crisis, like those associated with the Stamp Act or the Townshend Acts, the committees published versions of events that differed from royal accounts. They began to replace royal officials as a source of information for many colonists and, by 1773, they combined to form a communications network throughout the colonies.

In 1773, a major financial panic pushed the British East India Company, which supplied tea for the British Empire, to the brink of bankruptcy. Had the company failed, Britain’s entire economy would be affected and its hold on India would be jeopardized. Parliament issued the Tea Act in an attempt to save the company by allowing it to export tea directly to the American colonies.

Granted the British East India Company the ability to sell tea directly to the American colonies without paying export duties.

It is important to remember that Parliament did not enact the Tea Act to punish the colonists or raise revenue. On its surface, the Act was a straightforward measure to protect a company on the verge of bankruptcy. However, by lowering the cost of British tea in the colonies, the Tea Act coerced colonists to accept parliamentary supremacy through their consumption of British tea.

Parliament’s plan was perhaps too clever. A number of colonists, including many merchants who would lose business as a result of the law, saw the Tea Act as another assault on their liberty and a violation of the British constitution.

By granting a monopoly to the East India Company, the Tea Act not only cut out colonial merchants who would otherwise sell the tea themselves, it also reduced their profits from smuggled foreign tea. The merchants were among the most powerful and influential people in the colonies, so their dissatisfaction carried weight in colonial politics. Moreover, because the tea tax that the Townshend acts imposed remained in place, tea continued to represent the idea of “no taxation without representation”.

As they had when protesting earlier acts and taxes, the colonists responded with a boycott. Committees of correspondence coordinated resistance in all of the colonial port cities. Up and down the East Coast, ships carrying tea from the British East India Company were unable to unload their wares. In Charles Town, Boston, Philadelphia, and New York, the equivalent of millions of dollars’ worth of British tea was locked in warehouses or rotting in the holds of ships as they sailed back to Great Britain.

Colonists held mass meetings in the port cities that convinced royal officials to turn back the tea before it was unloaded. In Boston, however, governor Thomas Hutchinson refused to allow the tea ships to leave Boston Harbor, believing it was his duty to uphold Parliamentary law. He urged merchants to receive British tea when it arrived in the harbor. Meanwhile, Samuel Adams and the Sons of Liberty sought to prevent captains from paying the tea tax to customs officials and posted groups in the harbor to make sure that British tea was not unloaded.

When the Dartmouth sailed into Boston Harbor in November 1773, it had twenty days to unload its cargo of tea and pay the duty before returning to Great Britain. Two more ships, the Eleanor and the Beaver, followed soon after. On December 16, as the Dartmouth’s deadline approached, townspeople gathered at the Old South Meeting House determined to take action. A group of the Sons of Liberty and their followers left this gathering and approached the three ships. Some were disguised as Mohawk Indians. Protected by a crowd of spectators, they dumped approximately £10,000 worth of tea in the harbor (the equivalent of $1 million in today’s currency). What became known as the Boston Tea Party was a significant loss for the British East India Company and a direct affront to Parliamentary power in the colonies.

In London, response to the destruction of the tea was swift and strong. King George III and his prime minister, Lord North, insisted that Massachusetts must pay for the losses. Though some colonial merchants put forward a proposal for restitution, the Massachusetts Assembly refused to make payment. As a result, Parliament and the king agreed that Massachusetts would be forced to pay for the tea and yield to British authority.

In early 1774, leaders in Parliament issued four measures designed to punish Massachusetts. Commonly known at the Coercive Acts, they are described in the table below.

A series of four acts that Parliament passed to punish Massachusetts for destroying the tea and refusing to pay for damages associated with the Boston Tea Party.

did you know
The Coercive Acts were called the Intolerable Acts by colonial patriots.

At the same time, Parliament passed the Quebec Act, which granted religious toleration to French Catholics and formally established the royal colony of Quebec in Canada. To many Protestant colonists, tolerance of Catholicism was highly controversial. The Quebec Act also ceded much of the Ohio River Valley to Quebec, which deprived American colonists of access to the western territories they had fought for during the French and Indian War.

Formally established the royal colony of Quebec and granted religious toleration to French Catholics in Canada; often associated with the Coercive Acts.

A number of colonists, especially those in Massachusetts, referred to the Coercive Acts and the Quebec Act as the “Intolerable Acts”. Some in London also believed that Parliament had gone too far, as suggested in the political cartoon below, titled "The able Doctor, or America Swallowing the Bitter Draught," from London Magazine, May 1, 1774. 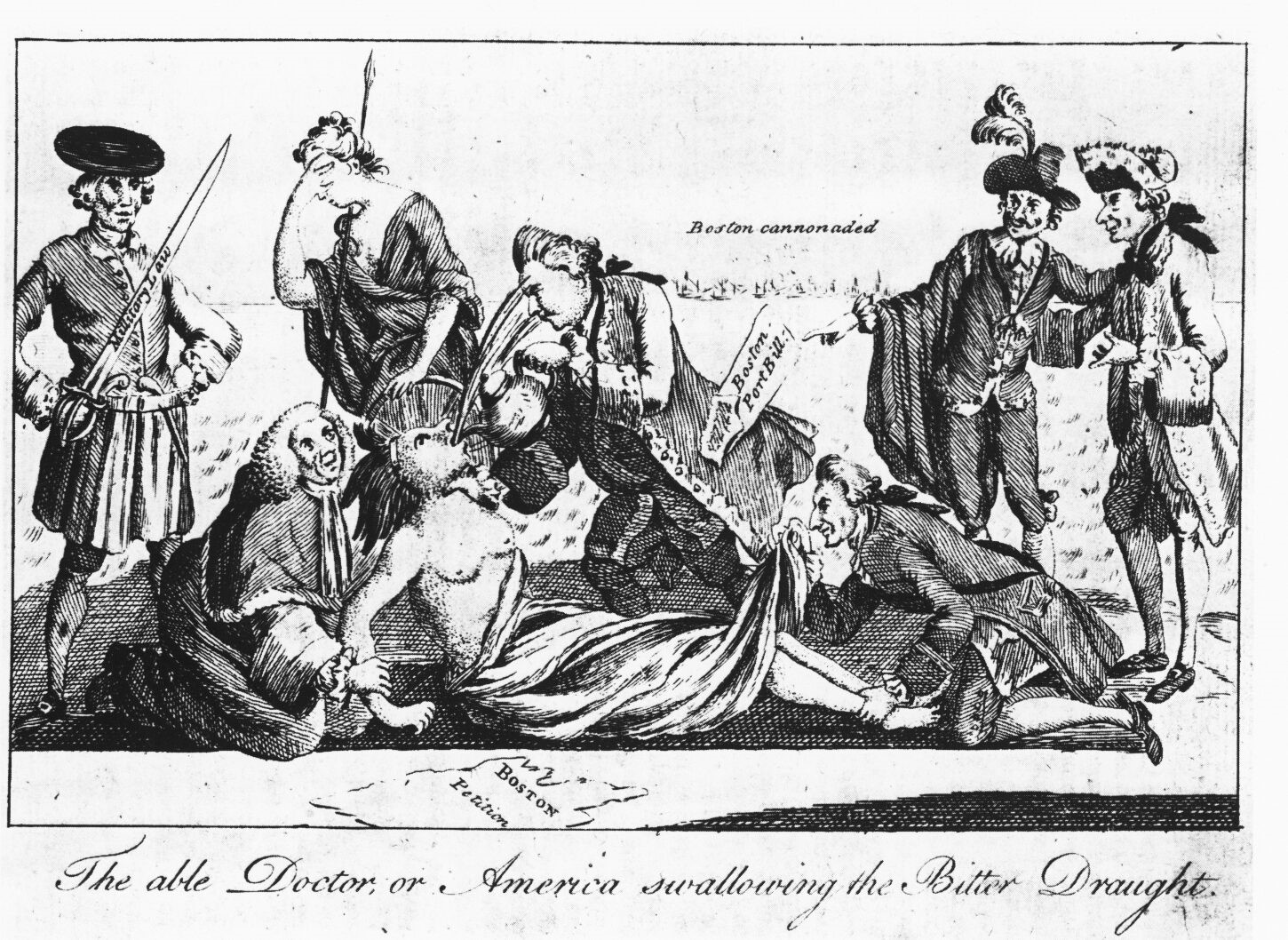 This political cartoon shows the Prime Minister (with the Boston Port Bill in his pocket) forcing the Coercive Acts down the throat of America, depicted as a Native American woman. Ironically, the woman is forced to drink British tea, which was a commodity that many colonists happily consumed prior to the crisis. Britannia (i.e., the British Empire) weeps in the background while an officer to the left carries a sword with the words "Military Law."

think about it
What is the “Bitter Draught” to which the cartoon refers, and why is it bitter?

In June, 1774, Paul Revere obtained a copy of the cartoon and distributed it throughout the colonies. At the same time, committees of correspondence in Massachusetts, which had coordinated a response to the Tea Act, mobilized committees in other colonies to support the cause. A series of Parliamentary actions, designed to discipline one colony (Massachusetts), had provoked responses throughout eastern North America. An increasing number of colonists began to see the Coercive Acts as an assault on their rights as English citizens.

summary
The Tea Act and its immediate aftermath, especially the destruction of the tea in Boston Harbor and the Coercive Acts, rekindled the decade-long argument between British colonists and Parliament. The role of tea in the dispute was of particular importance. For much of the 18th century, colonists happily consumed British tea, considering it a benefit of membership in the Empire. However, following the imposition of the Tea Act, the trade, consumption, and (in Boston’s case) destruction of tea drove the colonies and Great Britain apart. The Boston Tea Party convinced the British government that the colonial resistance movement was getting out of hand. The punitive aspects of the Coercive Acts indicated that the British government would not back down.

Formally established the royal colony of Quebec and granted religious toleration to French Catholics in Canada; often associated with the Coercive Acts

The Committees of Correspondence begin to emerge following the Currency Act and the Sugar Act.

The Committees of Correspondence throughout the colonies combine to form a massive communication network; the British East India Company is on the verge of bankruptcy; the Tea Act is introduced; known the Boston Tea Party, £10,000 worth of British tea is destroyed in Boston Harbor on December 16, 1773.

The Coercive Acts and Quebec Act are introduced.