Identify how a change in price affects a budget constraint.

Tutorial
what's covered
This tutorial will discuss how a change in price affects a budget constraint.

Let's begin today's lesson with our first key term, which is budget constraint. This is the graphical depiction of consumer income relative to the price of goods available.

Where the budget constraint touches the highest indifference curve available, the consumer is said to be optimizing their consumption.


Here is an example to illustrate a budget constraint graph.

Suppose Kate has $100 a month to go out to lunch at her two favorite places:

Now, a budget constraint will list all possible combinations Kate can afford if she spends all $100 on going out to lunch. Here is what it looks like in graph form: 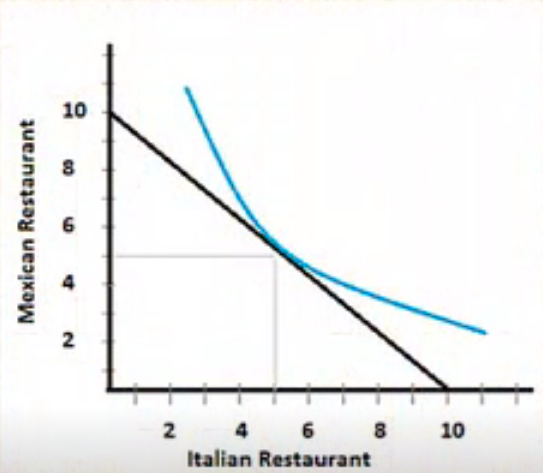 Notice the extremes for each option where the budget constraint hits each axis, which indicate that Kate--if she is spending all $100--can afford either:

The indifference curve is represented by the blue curve on the graph, which shows which combination Kate chooses--because remember, most people probably wouldn't prefer all of one or all of the other.

The area within the budget constraint shows any combination that is affordable. However, Kate is maximizing her utility if she goes on her highest indifference curve.

According to Kate's indifference curve, she will choose five of each.

Now, what would happen if prices change? Simply defined, prices are the cost of goods or services to the consumer.

Suppose the Italian restaurant decides to end their lunch special, and now it is going to cost Kate $20 to go to lunch there.

This will certainly impact her budget constraint, and ultimately, her final choice as well.

Notice that Kate's budget itself did not change; she still has a budget of $100. It is only the price of Italian meals that increased. 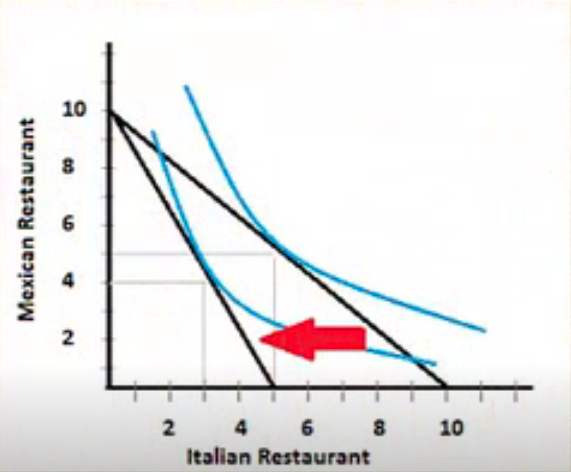 Notice that nothing changed with the Mexican restaurant meals--they are still only $10.

At the extremes, the new budget constraint shows that Kate can now afford either:

Kate cannot afford as many Italian meals now. In fact, she can only afford half as many as before.

A change in income would have shifted the entire budget constraint in parallel, but that did not happen. The only change in price affected the Italian restaurant's meals.

Now, how is this going to impact Kate's ultimate choice?

Remember, before the price change, Kate was enjoying five of each type of meal. This was the combination that maximized her utility.

However, now that her budget constraint has pivoted, the indifference curve that will maximize her utility places her at an optimal choice of three Italian meals and four Mexican meals.

The cost of goods or services

The income effect states that consumers' purchasing power changes as income changes, affecting demand for a good or service.

The substitution effect states that when income decreases or price rises, cheaper goods and services are consumed instead of the more expensive alternative.

This, then, is the the income effect. As the price of Italian meals went up, this had an impact on Kate's purchasing power, or on her income, so she was buying fewer of both meals.

Even though only one got more expensive, if she still wanted some Italian meals, it has impacted her overall purchasing power.

So, when she decreased her Mexican meal consumption from five down to four, it had nothing to do with Mexican meals changing in price. It was simply because her overall purchasing power went down--and that is the income effect.


The substitution effect is easier to understand. Now that Italian meals have become more expensive, Kate is dining at the Mexican restaurant more than the Italian restaurant.

Even though her consumption at the Mexican restaurant went down from five to four, she is still dining there more than at the Italian restaurant, where she is only going three times.

Despite the fact that she is able to afford both a little bit less, she is substituting more times now at the Mexican restaurant than the more expensive alternative, which is the Italian restaurant. This is what we call the substitution effect.

When income decreases or price rises, cheaper goods and services are consumed instead of the more expensive alternative

The cost of goods or services.

When income decreases or price rises, cheaper goods and services are consumed instead of the more expensive alternative.