Or
Close Popup
+
4 Tutorials that teach Calculating a T-Test Statistic
Take your pick:
Previous Next

Calculate a t-statistic of a sample mean.

Tutorial
what's covered
In this tutorial, you will learn about t-tests, and how to determine key characteristics of a t-distribution. Our discussion breaks down as follows:

1. Difference between Z-Tests and T-Tests

In a z-test for means, the z-test statistic is equal to the sample mean minus the hypothesized population mean, over the standard deviation of the population divided by the square root of sample size.

The only difference is the t-distribution is a more heavy-tailed distribution. If we used the normal distribution, it wouldn't underestimate the proportion of extreme values in the sampling distribution.

The only difference between these two tests is the test statistic is going to be a t-statistic instead of a z-statistic. Because we’re using the t-distribution instead of the z- distribution, we're going to obtain a different p-value.

Therefore, we will need a new table, not the standard normal table for that. Below is the t-distribution table. We can see the possible p-values in the top row and the t-values are the values inside the table. Potential p-values are based on the values within this section.

This distribution is actually one-sided, and it's the upper side that gives us these tail probabilities here. The entries in the t-table represent the probability of a value laying above t.

The one new wrinkle that we're adding for a t-distribution is this value df (the far left column). It's called the degrees of freedom. For our purposes, it's going to be the sample size minus 1. We find our t-statistic in whatever row our degrees of freedom is. If it's between two values, that means our p-value is between these two p-values.

According to their bags, a standard bag of M&M's candies is supposed to weigh 47.9 grams. Suppose we randomly select 14 bags and got this distribution.


Assuming the distribution of bag weights is approximately normal, is this evidence that the bags do not contain the amount of candy that they say that they do?

The null is that the mean is 47.9 grams. The alternative is the mean is not 47.9 grams. We can select a significance level of 0.05, which means that if the p-value is less than 0.05, reject the null hypothesis.

Consider the following criteria for a hypothesis test:


Let's verify each of those in the M&M's problem:

Step 3: Calculate the test statistic and the p-value.

Since we do not know the population standard deviation, we will calculate a t-test. We first need to find the sample mean and standard deviation. We can easily find both values by using Excel. First, list all the values given. To find the average, type "=AVERAGE(" and highlight all 14 values. We can also find this function under the Formulas tab, and select the Math and Trigonometry option. 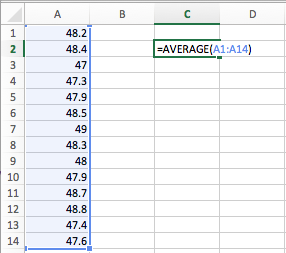 When we press "Enter", we get an average of 48.07. We can also find the standard deviation easily by typing "=STDEV.S(" and highlighting the 14 values. We can also find this function by going under the Formulas tab, and then selecting the Statistical option. 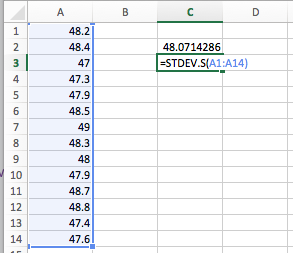 This gives a standard deviation of 0.60.

Now, we can plug the known values into the t-statistic formula:

By plugging in all the numbers that we have, we obtain a t-statistic of positive 1.06. Where exactly does this tell us? We need to calculate the probability that we get a t-statistic of 1.06 or larger.

In all likelihood, it's not one of the values listed in the row here, but between two values. We’ll see 1.06 is between the 0.870 and the 1.079, which means that the p-value is going to be between the two numbers 0.40 and 0.30 on the top row for a two-tailed test. Recall that we are testing to see if the mean weight of the M&M's bags is anything other than the hypothesized 47.9 grams, so this is a two-tailed test.

Now, we can, in fact, use technology to nail down the p-value more exactly. We don't have to use this table, although we can still use the table to answer the question about the null hypothesis.

Step 4: Compare our p-value to our significance level.

We don't know exactly what our p-value is, but we know that it's within the range of 0.30 to 0.40. Since both of those numbers is greater than the significance level of 0.05, we're going to fail to reject the null hypothesis. There's our decision based on how they compare.

Finally, the conclusion is that there's not sufficient evidence to conclude that M&M's bags are being filled to a mean other than 47.9 grams.

summary
In cases where the population standard deviation is not known--which is almost always--we should use the t-distribution to account for the additional variability introduced by using the sample standard deviation in the test statistic. A t-test means that the value will be a "t" statistic instead of a "z" statistic. The steps in the hypothesis test are the same as they are in a z-test: first stating the non-alternative hypotheses, stating and verifying the conclusions of the test, calculating the test statistic and the p-value, and then finally, comparing the p-value to alpha and making a decision about the null hypothesis.