Or
Close Popup
+
4 Tutorials that teach Calculating Correlation
Take your pick:
Previous Next

Calculate the correlation of a given data set.

(more)
See More
Tutorial
what's covered
This tutorial will introduce correlation and correlation coefficient. Our discussion breaks down as follows:

When first describing scatter plots, you learned about their form, direction, and strength.

hint
You can use the chart above to help you to understand the value of a correlation. Numbers between 0.8 and 1 are considered to have a strong correlation; between 0.5 and 0.8 a moderate correlation; and between 0 and 0.5 a very weak correlation. The same exists between negative 1 and 0.

Correlation is essentially the average of the products of the z-scores for the x's and the y's. The z- scores are the values of x minus the means of x divided by the standard deviation of x. It's the same thing for y.

These are destinations that you could go to from the city of Minneapolis-Saint Paul, with the distances away from Minneapolis and the airfare to fly to any of these places.

Step 1: Calculate z-scores of the x variable. In this situation, miles is x, or the explanatory variable, as miles are believed to cause airfare to rise. This makes airfare the response variable, y. Take the given miles and airfare and convert both of them into z-scores. 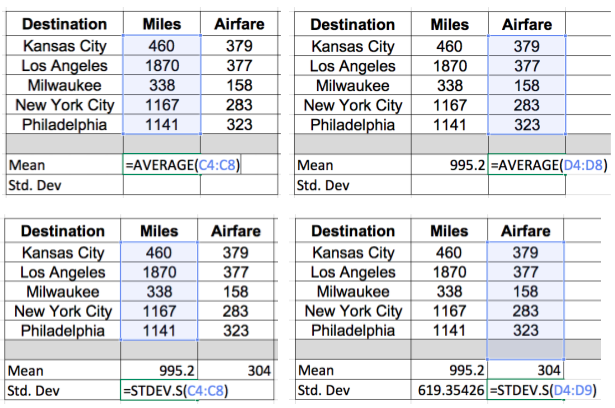 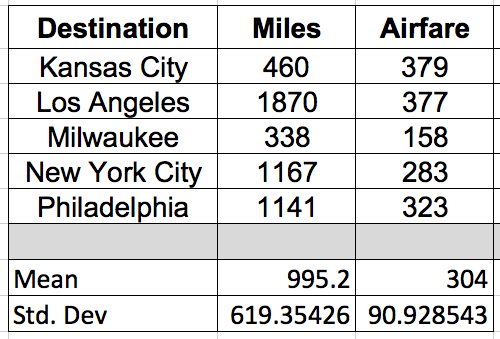 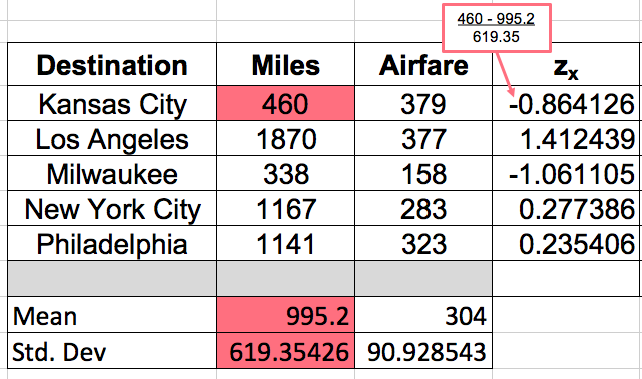 Do the same thing for the 1870 miles to Los Angeles, and all of the other cities.

Step 2: Repeat this process and calculate the z-scores for the y values. In this scenario, the response variables are the airfare values. Starting with Kansas City, 379 minus 304 divided by 90.93 gives us 0.825.

Do the same thing with all the rest of the airfare.

The sum here ends up being positive 2.11. We can substitute this value into the correlation formula.

Step 4: Finally, divide by the number of observations minus 1. There are five observations, so the denominator will be 5-1.

Dividing by four yields a correlation of 0.527. This value tells us that the correlation between airfare and miles is a positive relationship but fairly weak association. We can also see this from the scatter plot: 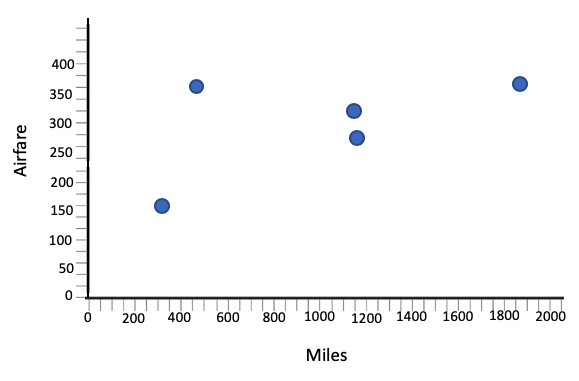 This is a very cumbersome process to go through, and the correlation coefficient is almost always found using technology. In Excel, once we have the basic information for miles and airfare listed, all you have to do is type in the command "=CORREL", which is short for correlation. Select all the things believed to be the x's, and all of the things we believe to be the y's. Close the parentheses and hit "Enter." 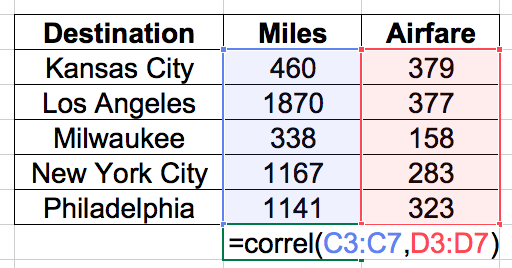 The correlation only relates the linear relationship between two quantitative variables. As a caution, you're going to hear the word correlation thrown around a lot in everyday speech; however, there are often very common errors made when comparing two different variables. It is always important to make sure the two variables being measured are quantitative.

think about it
Can you spot the errors in the following statements?

"There is a strong correlation between Type 2 diabetes, physical inactivity, and obesity."

Although it's possible that they are related, you can't use the word correlation. The first error here is that three variables are being compared, and correlation only compares two variables. Also, Type 2 diabetes is categorical--either you have it, or you don't. Physical inactivity could be quantitative, but it's not obviously quantitative. Obesity is certainly categorical.


"There is a strong correlation between IQ and religious affiliation."

Although IQ is quantitative, religious affiliation is categorical. You can't calculate the correlation between the two.

summary
Correlation measures the strength and direction of a linear relationship between two variables on a scatter plot. Strong associations have correlation coefficients near positive 1 or negative 1. Scatterplots with weak correlation coefficients are values near zero. Almost always, you can find it using technology, such as a calculator, an Internet Applet, or a spreadsheet. Because of the way that r is calculated, where you're multiplying z-scores, it doesn't matter which variable is called the explanatory and which is the response.