Tutorial
what's covered
This tutorial will explain the concept of standard deviation. Our discussion breaks down as follows:

As complicated as the formula looks, it's actually the one preferred most, provided that the distribution that you’re looking for is roughly symmetric and doesn’t have outliers. If the data is not symmetric or has outliers, you will use a different measure of spread, the interquartile range.

A typical amount by which we would expect a data point to differ from the mean. Typically, about half to two-thirds of the data points fall within one standard deviation of the mean.

When calculating the formula for standard deviation, you follow these steps:

Step 1: Subtract the mean from each value.
Step 2: Square those values, resulting in (x minus mean)2.
Step 3: Use the sigma notation, which is the same as summation notation, to add these values.
Step 4: Divide that sum by (n minus 1).
Step 5: Take the square root.

These are the heights of the Chicago Bulls basketball team.


Step 2: Square those values, resulting in (x minus mean)2.


Step 3: Use this sigma notation, which is the same as summation notation, to add these values up. They sum up to 205.35.

hint
If you stopped here, this 14.67 number would measure another kind of variation called "variance." Variance is equivalent to the square of the standard deviation. Variance isn’t used very often, mainly because it is still a squared value. The measurement for variance, in this case, would be 14.67 inches squared, versus inches.

Step 5: The final step is to take the square root of that number, which equals 3.83.

Here is an overview of the entire calculation:

For this data set, you would expect a good portion of the heights to be within 3.83 inches of the mean, 78.33.

Standard deviation is a typical amount by which we would expect values to vary around the mean.

try it
Considering the original list of heights, which fall into one standard deviation of the mean, meaning their heights are either 3.83 above or below 78.33?


You'll notice about ⅔ of the players had heights in this range. That is how you interpret the standard deviation.

If you're frustrated with the calculation you just practiced, you can use your calculator or a spreadsheet in the future.

Here is how to use spreadsheets to calculate standard deviation:

Step 1: Enter your list of data into the spreadsheet.
Step 2: For the formula, type “=stdev(”.
Step 3: Highlight the list that you want to find the standard deviation for, close the parentheses, and hit "Enter." 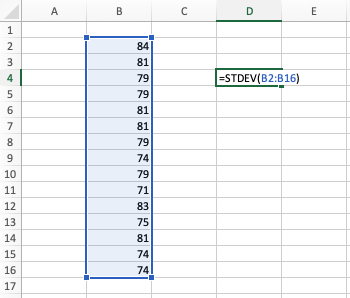 This spreadsheet formula finds the same number as the calculation you did by hand: 3.83.

big idea
If you have Excel or another spreadsheet program, there should be a standard deviation formula that you can use.

A typical amount by which we would expect a data point to differ from the mean. Typically, about half to two-thirds of the data points fall within one standard deviation of the mean.