Identify which theory of ethics is consistent with a given statement about the morality of an issue relating to animal rights.

Tutorial
what's covered
In this tutorial we will be looking at various issues in the ethical evaluation of animal rights. Our discussion will break down like this:

The main way to understand what rights, if any, a non-human animal has is to ask what its moral status is. It’s tempting to think that moral status is something that you either have or you don’t. Thinking along these lines usually means saying that only humans are moral beings that have rights, and everything else doesn’t.

But we often make distinctions between greater and lesser moral status.

We sometimes actually say some humans have less claim to moral status than others. For instance, we think criminals lose the right to freedom.

This shows that there is something in between having full moral status, and none at all.

Hopefully this helps us understand our current topic better. Non-human animals might not be granted the same moral status as humans, but they could still have more than an inanimate object.

did you know
A reason that is often given for thinking that animals have some claim to moral status is that they feel pain.

This would mean we should stop certain current cruel practices such as factory farming and animal testing.

Basing animals' moral status on their ability to feel pain is most closely associated with consequentialist ethics. That’s because it often finds things such as pleasure and pain directly relevant ethical considerations.

Even though consequentialism seems most suited to take animal rights seriously, other positions can accommodate them as well. Although deontology and character ethics focus on human concerns, animals can be ethically important insofar as our actions towards them tell us something about ourselves. 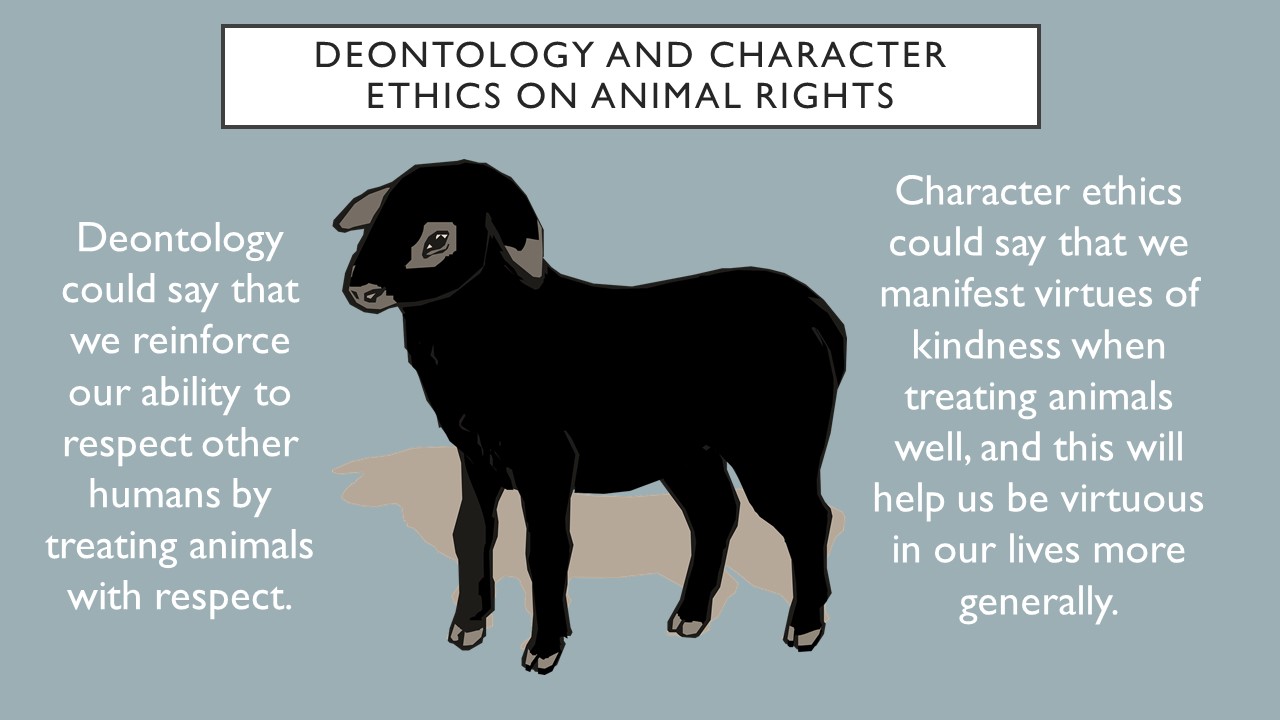 There are other reasons to think that we might have responsibilities to non-human animals. For instance, there is the idea that we're entrusted with the care of certain things. And this could include animals in general, endangered species in particular, and the environment more broadly.

hint
Our role here is often referred to as “stewardship.” A way to remember this is that the term steward has a similar meaning to caretaker or guardian.

But you might be asking: why should we be caretakers? It’s a bit clearer in a religious context. If God created nature, then God entrusts it to us and we would be responsible for taking care of it in the meantime.

This can be translated into a secular context.

You might think that we are entrusted to look after nature for future generations.

Although it is only indirect, there is still a strong sense of responsibly towards animals.

summary
We started this tutorial by investigating issues in the moral status of animals, focusing on the fact that we can attribute moral status to non-human animals without saying they share the same rights as humans. The main factor for thinking that we have some obligations towards animals was seen in the fact that they feel pain.

Then we looked at ethical theories and animal rights. We saw that consequentialism is most apt to consider animal rights because of the centrality of pain and happiness to its evaluations. Finally, it was seen that responsibility for animals can be based on the obligations we have to things other than animals.