Or
Close Popup
+
2 Tutorials that teach Central Banks
Take your pick:
Previous Next

Determine the main roles of central banks in the United States.

Tutorial
what's covered
This tutorial will cover the main roles of central banks in the U.S., including the development of the central banking system in this country.

1. Free Banking Era and the Need for Common Currency

Historically in the U.S., control went back and forth between a centralized banking system and a free banking era, where states had the right to regulate their own banking.

There were many problems during this period of state self-regulation, such as:

During the Civil War, the official currency issued was called "greenbacks." However, at the same time, the Confederacy issued their own currency backed by cotton, which became completely worthless as the South was losing the war.

Now, the first step towards a central bank was that people recognized the need for a common currency. Each bank was printing and issuing its own currency, so it was difficult to know the value of any given banks notes in circulation.

This is one example of a private bank note that was printed by one bank. Notice how it looks nothing like the $1 today. It also looked nothing like other dollars being printed at the time, which made it quite difficult to ascertain its value versus other banks' notes.

Since every bank's notes were different, it was difficult for people to buy anything when they were traveling any kind of distance. Therefore, people realized that a central bank would solve this problem by issuing a common currency for everyone to use.

A central bank is defined as a central banking authority that is typically charged with the regulation of money supply and interest rates.

Now that there was a standard currency being issued, Americans relied less and less on physical gold as money. Banks were printing paper money, which represented a designated amount of gold, during the gold standard.

did you know
Initially, each dollar represented 1/20 of an ounce of gold.

Now, with a central banking authority standardizing the dollar, people started to trust that the dollar was an accepted form of payment, which is known as a fiat currency.

In other words, it is no longer a representative type of currency backed by gold; it simply became an accepted form of payment in and of itself.

So, how do banks make money? We know that if simply stored it for us, they would not profit. As you are likely aware, banks earn interest. They do this by paying interest to individuals who deposit money into an account--known as a deposit or checking account--but in turn, they charge a higher interest rate to loan out that money to others, which is how they earn their revenue.

They realized that they could make more loans--and more money--by only holding onto a fraction of people's deposits in reserves. For every dollar held in the vault, or physical reserves, there could be multiple dollars in multiple checking accounts on which customers had the ability to write checks and demand the money.

Now, this may sound a bit suspect. Well, the system works as long as certain things do not go wrong--meaning, what are the chances that everyone will show up at the bank/ATMs at the same time, demanding all of their money? The likelihood is not very high that this will happen.

As long as the demand for cash on any given day is less than the cash held in reserve, the system works just fine. It allows banks to make more loans and earn more interest.

This is essentially how banks create money in our economy. However, problems arise if banks lend out too much money or if, for some reason, a lot of people show up demanding the cash in their accounts. In this case, the bank finds itself in a situation where they cannot meet their demands, and the bank fails or goes bankrupt--which, as you will see in the next section, happened a lot.

Consider the scene in the film It's a Wonderful Life when everyone rushes to the bank, demanding their money all at once. The bank manager has to explain to everyone that he does not have their money because it has been invested elsewhere. Bank runs like this occur when bank customers show up demanding all of their money at one time. 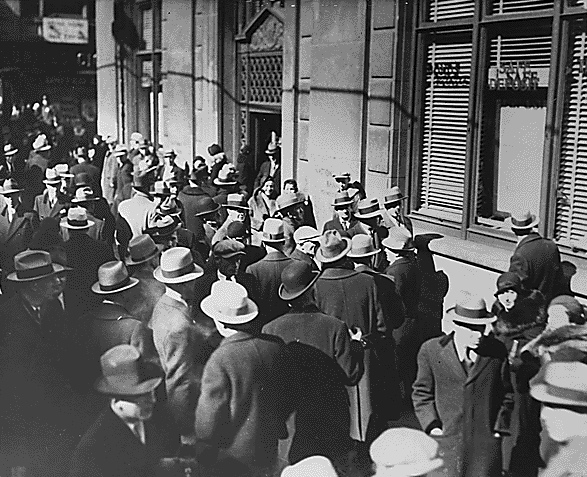 When this happens on a large scale, as it did at the beginning of the Great Depression when the stock market plummeted and there were a lot of bank runs, we call this situation a panic.

People are literally panicking as a result of something that they heard about in the economy, and they all run to the banks to get all of their money. The first people to arrive might get their money, while others do not, because again, the banks are only holding onto a fraction of their money in reserves.

These bank runs and panics take a bad situation and make it much worse. These are not good for an economy. When banks fail, it creates a lot less confidence and a lot more worry from consumers.

The key to a healthy economy is confident consumers, or people willing to go out and spend their money. It is very difficult to get the economy back on track in the case where people are not confident at all in the banking system.

To reiterate, a panic or a run is a financial separation of an individual from a depository institution as a result of perceived risk in the institution's solvency, or their ability to make loans.

4. Tools of the Central Bank

Now, the central banking system has evolved over time. It has come up with several tools to keep these runs and panics from happening because we realized how bad it was for the economy.

Reserves, again, is a portion of deposits required to be held by a bank. These reserves are usually kept to maintain reserve requirements as set by our central bank today, the Fed.

Another tool of the central banking system is acting as a lender of last resort. If banks do not have enough reserves to meet their reserve requirement for some reason--perhaps a lot of people came to withdraw money on a particular day--then they can borrow from one another, or from the Fed, if necessary.

Today, they also conduct bank examinations to ensure that banks are not being too risky with consumers' money.

All of these things are meant to give consumers, or depositors, confidence in the banking system, to prevent runs and panics, and create a more stable banking system.

Now, not only did a central bank help Americans in different states buy from one another, because of the standard currency, central banks are also very important in international exchanges.

We know that over time, international exchanges have become increasingly more important in part because central banks have made it possible to be that way.

think about it
Do you think a foreigner would want to sell anything to an American if they were unsure of our dollar stability? Likely not.

As a final note, then, we do have a bank for international settlements, which is an international organization of central banks with the goal of helping to facilitate international trade and ensure that it runs smoothly.

big idea
The tools developed over time by the central banking system to prevent bank runs and panics include requiring a reserve requirement, acting as a lender of last resort, and conducting bank examinations.

A portion of deposits required to be held by a bank; reserves usually are kept to maintain reserve requirements, as set by the Fed

summary
Today we learned how a central banking system developed over time in our country, arising from the free banking era and the need for common currency. We reviewed how the fractional reserve system only functioned as long as the demand for cash on any given day was less than the cash held in reserve, but it failed in situations of bank runs and panics. Therefore, while the main role of the central bank in the beginning was to standardize currency, other tools were developed over time to cut down on these bank runs and panics. Lastly, we noted that central banks facilitate not only national transactions, but international transactions as well.

A central banking authority that is typically charged with the regulation of money supply and interest rates.

The financial separation of an individual from a depository institution as a result of perceived risk in the institution’s solvency.

A portion of deposits required to be held by a bank; reserves usually are kept to maintain reserve requirements, as set by the Fed.