Identify the functions of the cerebral cortex and its hemispheres.

Tutorial
what's covered
This tutorial will discuss the structure of the brain by focusing on:

This cerebral cortex area is responsible for most of the recognizable aspects of a person's mind--things like personality, thought, language, the storage of memory, movement, and the senses. All of these things are related to the cerebral cortex.

Humans have a very developed cerebral cortex compared to a lot of other animals, which is why we're considered to be more intelligent and aware than those animals. It's important to note that humans don't have the largest brains out of every animal. That would be the whale, which is a much bigger animal, and as a result, it has a much bigger brain.

The outer layer of wrinkled grey matter on the outside of the brain, responsible for a person’s personality, thought, language, storage of memory, movement, and senses

2. Hemispheres of the Brain

The two sides of the brain are connected by a bundle of neurons in between that is shown here in red below. This is known as the corpus callosum, that connecting area of the two hemispheres. 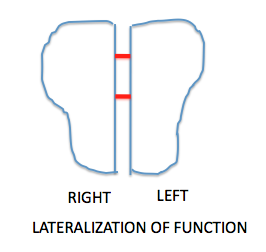 It is important to note that we have two different hemispheres because it provides a sort of backup system for any brain function. There are always two of each structure, so if one of them has a problem, the other one can help out.

did you know
Five percent of people might have the functions assigned to each hemisphere flip-flopped, versus the rest of the population.

Generally, what is meant by lateralization of function is that people are neither left-brained or right-brained, as each side controls a different side of the body.

If a stroke victim is having trouble moving their right arm, this means that the stroke damaged the left side of their brain.

Each side also controls different types of thinking. To determine this, there were studies done on people known as "split-brain patients." These are people who have had their corpus callosum--that connecting part in the middle of the brain--severed.

The corpus callosum is cut mainly because of epilepsy. This is a procedure to help people who experience major epileptic seizures. 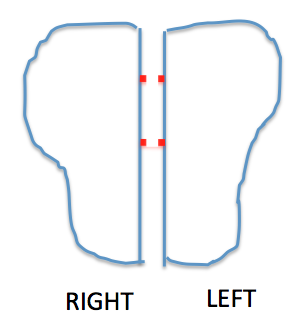 What did they discover when the corpus callosum was cut? Surprisingly, people acted the same, because both eyes were able to see what was happening around them, which means that both sides of the brain could also see and react in their normal ways.

However, if you showed each eye a different image separately, they found that because that corpus callosum was severed, each eye only responded to one part of the brain.

Half of the brain (left or right), divided by the longitudinal fissure; each hemisphere controls certain parts of the brain and can have certain specialized functions

3. Lobes of the Cerebral Cortex

The frontal lobe is related to higher-level thinking tasks, like the sense of self, self-awareness, and personality, as well as movements. This is an area of the brain that is very highly developed in humans.

Lobes of the Cerebral Cortex

summary
This tutorial focused on the cerebral cortex, the outer layer of the brain, composed of wrinkled grey matter. The left and right hemispheres of the brain are responsible for specific behaviors, and each corresponds to the opposite side of body, respectively. The left hemisphere is generally responsible for analytical situations, and the right side is responsible for spatial awareness. There are four lobes of the cerebral cortex: frontal, parietal, temporal and occipital. The frontal lobe is highly developed in humans and is related to higher level thinking such as self-awareness.
Good luck!
Terms to Know

The outer layer of wrinkled grey matter on the outside of the brain, responsible for a person’s personality, thought, language, storage of memory, movement, and senses.

A large bundle of neurons that joins the two hemispheres of the brain.

Half of the brain (left or right), divided by the longitudinal fissure; each hemisphere controls certain parts of the brain and can have certain specialized functions.

Lobes of the Cerebral Cortex

Specific or generally defined areas of the cerebral cortex related to different functions.