Tutorial
what's covered
The formal characteristics of the portal sculptures, along with the influence of humanism on the design elements at Chartres Cathedral, make this structure an important example of Gothic architecture. This lesson covers:

big idea
Chartres Cathedral is a classic example of Gothic architecture and contains some of the best examples of Gothic stained glass in the world.

As highlighted in the timeline below, this lesson spans 1134 to 1260 AD, and focuses on Chartres, France, which is very close to Paris.

Here is a map of France showing the cities of Chartres and Paris: 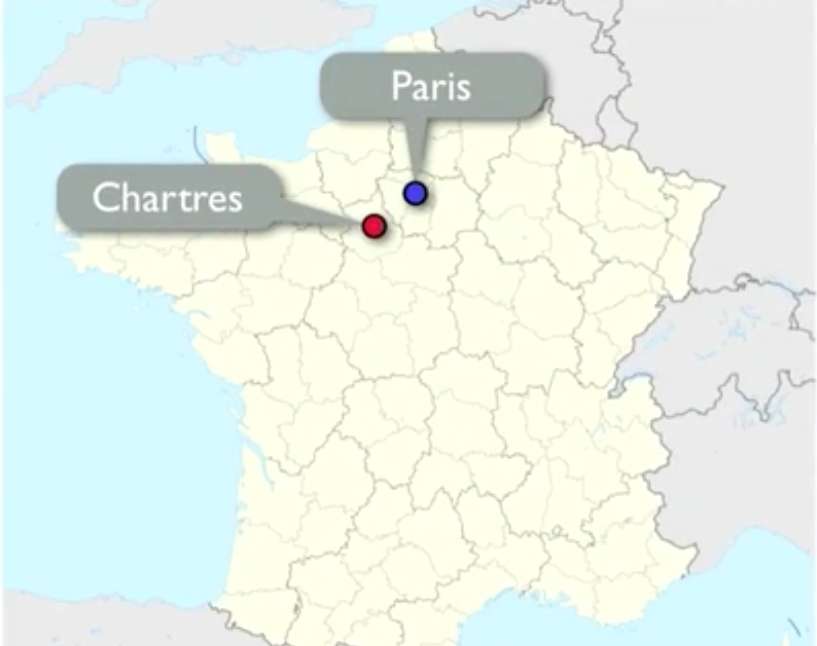 Chartres Cathedral is a beautiful example of Gothic architecture in France. Interestingly, the stained glass windows in Chartres are, for the most part, completely original. To have survived in the elements for roughly 900 years is nothing short of amazing. The artistry of the windows themselves is truly amazing as well.

Here is an image of the Chartres Cathedral:

Here is the western façade of the church:

The western façade of a cathedral is the primary entrance, as they are arranged west to east. Chartres Cathedral had a standard three portal entrance, and the tympanums were all filled with religious imagery. Sculptures adorn the supportive jambs that flank the doorways of these churches.

Chartres has a rather interesting style in that it had engaged portal sculptures constructed on the exterior of the church.

Pictured here are sculptures of two Old Testament kings and a queen, who are ancestors of Christ:

These are sculptures of Saints Martin, Jerome, and Gregory:

Saint Theodore is not pictured here, but is also included in these sculptures. These sculptures are naturalistic in their appearance, yet unnaturally elongated. This might have been done purposefully to fit the sculptures into the length of jamb itself.

These sculptures show the influence of humanism that penetrated this age, sometimes referred to as the Proto-Renaissance, and contributed to the rise of humanism during the actual Renaissance. Other examples of sculptures such as these are the Christ as Beau Dieu at Amiens Cathedral and the visitation jamb sculptures at Reims Cathedral, which are all in France.

Finally, on the exterior, the flying buttress supports enabled the wall to function as a support for stained glass rather than a support for the weight of the building itself. This specific element is a unique characteristic of Gothic architecture.

It is worth pointing out the numeric symbology of Chartres Cathedral.

Take, for example, the three portals in the western facade. Why three? Three is an important number in Christianity, as it represents the Holy Trinity: Father, Son, and Holy Spirit.

Four is another important number. It represents the four cardinal directions of earth: North, East, South, and West.

did you know
Three plus four represents the union of heaven and earth. The resulting number is seven, which is found in several groupings within the church, such as the seven bays within the apse. This is another example of scholasticism’s presence in the architecture of the 12th and 13th centuries.

The inside of the church is where we see the full effect of the walls filled with colored glass. Narratives or iconography important to the Church and Christ’s history fill these glass windows. The narratives were elaborate in the windows that lined the nave because they were closer to people, and could be seen in detail. Patterns of icons were easier to see from a distance.

The nave is pictured below.

The rose window located in the north transept describes the ancestry of Jesus and Mary.

The windows that lined the nave each had a theme. For example, the Charlemagne Window, which is not pictured, depicted a narrative about Charlemagne that included his departure from Spain.

think about it
Donors for this artwork and glass windows were important because these windows were incredibly expensive. Donors included the baker, carpenter, and local furriers. Sometimes, as in the case of the Charlemagne Window, donors were depicted in the artwork itself.

The Jesse Tree, shown below, is another example depicting the important ancestral lineage of Christ. This time it’s displayed vertically with the image of Christ located at the top.

This final example is of the "Virgin and Child and Angels" window, more commonly called "The Blue Virgin" window because of her blue robes.

In this window, the Virgin Mary is enthroned with Christ in front of her and a dove near her head, symbolizing the Holy Spirit. The bottom three rows depict two stories. The first two are of the wedding feast at Cana, where Jesus turned water to wine, and the last row of that set depicts the temptation of Christ.

Moving on in the lesson, you explored the exterior of Chartres and the interior of Chartres. Chartres Cathedral has exterior components that are filled with religious imagery. Sculptures adorn the supportive jambs that flank the doorways of this church. Narratives or iconography important to the Church and Christ’s history fill the glass windows.

Finally, you learned about the numeric symbology present in this piece of architecture. The number three represents the Holy Trinity in Christianity: Father, Son, and Holy Spirit. The number four represents the cardinal directions: North, South, East, and West. Both are intertwined in the architectural elements of Chartres Cathedral.

The space extending from the main entrance to the narthex with aisles on both sides.