Or
Close Popup
+
2 Tutorials that teach Choosing the Right Resolution Process
Take your pick:
Previous Next

Determine the right resolution process for a conflict situation.

Tutorial
what's covered
There are a number of different conflict resolution processes. In this lesson, we will look at how to decide which process is the best fit for a particular conflict.

Suitability of process is the degree to which a conflict resolution process is appropriate in a given conflict. 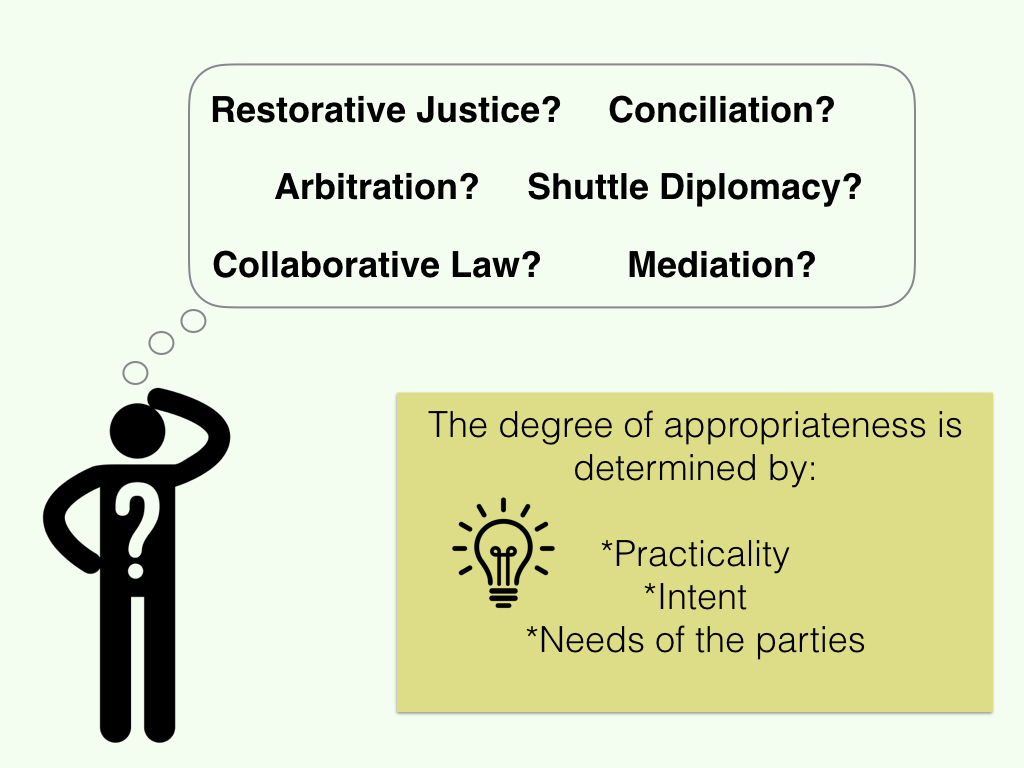 This degree of appropriateness is determined by:

Because there are a number of factors at play here, determining suitability involves finding the answers to questions such as:

All of these are considerations that must be taken into account when deciding which process might be the most effective.

The restorative justice method is based on the relationship between the parties, and the number of people involved.

In this method, the involved parties that come together are:

In restorative justice, the focus is on the accountability of the offender, and on a dialogue in which all the parties are able to hear one another speak.

Through this dialogue, the parties reach an agreement that will allow the victims to receive some sort of restoration on the part of the offender.

Thus restorative justice is an effective method in a conflict where the relationship between the parties, and the use of open dialogue, are important.

The mediation process is also based on a relationship. Whether the conflict is intense or not, the important fact is that the parties are willing to come together and collaborate.

As you know, mediation is facilitated by a neutral mediator who does not offer opinions or solutions, and is not invested in the outcome.

The goal in mediation is to get the conflicting parties together so that they can collaborate to reach an agreement on their own.

Like restorative justice, mediation is a good method in a situation where emphasis needs to be placed on relationships and dialogue.

While collaborative law (also referred to as divorce mediation) is also based on a relationship, this process involves divorcing or separating parties who want to work together to come to an agreement instead of going through the court system.

Unlike mediation and restorative justice, collaborative law requires the technical expertise of a lawyer. A mediator can help facilitate a conversation toward a resolution, but a lawyer must be present to evaluate and approve any sort of mediated agreement.

Collaborative law is obviously suitable for a relationship-based conflict, but it’s important to remember that technical expertise is also required in this process.

Arbitration is appropriate when the parties are looking for someone to actually make the decision outside of the courts.

Many businesses choose arbitration to settle contractual matters or legal matters; these companies often have it written right into the contract that any dispute will be settled by arbitration.

Arbitration can involve two parties, or there could be a larger number of parties that want to meet together. In either case, the dispute is being handed to a third party, who then reviews it and makes a decision.

The focus here isn’t so much on the relationship between the parties, but rather on the actual decision. Both parties, of course, must agree to this process.

In shuttle diplomacy, the parties who are in conflict do not meet together in the same room, and the conflict-resolver is moving between the parties.

If you remember, shuttle diplomacy was a term coined by Henry Kissinger back in the early 1970s when he was trying to settle the Yom Kippur War; he was shuttling back and forth between the parties with whom he was negotiating.

This method is very appropriate in diplomatic international relations, as the focus is on tangible outcomes involving the proposals and requests that the conflict-resolver brings from one party to the other.

Conciliation is also used when parties do not want to meet together because it's impractical or, in some cases, potentially dangerous. Like the conflict-resolver in shuttle diplomacy, the conciliator moves back and forth between the parties.

However, the difference between conciliation and shuttle diplomacy is that conciliation focuses on the non-tangible elements as well as the tangible.

The conciliator will thus address issues of tension and communication between the parties because those issues are important to the relationship.

big idea
As you can see, all six of these methods are certainly appropriate at one time or another. Their suitability in a given situation depends upon the specifics of the following:

think about it
Recall a conflict that you recently encountered in your life:

summary
In this lesson, you learned that suitability of process helps determine which conflict resolution process would be most effective in a particular conflict. You now understand how to use suitability to evaluate the six processes, which are restorative justice, mediation, collaborative law, arbitration, shuttle diplomacy, and conciliation.