Classify the exchange and flows between households, firms, the government, and the rest of the world from a circular flow diagram.

Tutorial
what's covered
This tutorial will cover the Circular Flow Diagram, which illustrates the big picture of the economy.

As mentioned in the introduction, the Circular Flow Diagram is a model that is used to show a "big picture" of how the economy functions overall. It shows the interactions between consumers, or households, firms, the government, and the rest of the world.

Keep in mind that no model could show us every single interaction, so it is a simplified model.

Now, the two markets shown on the circular flow diagram are:

The output market is where we, as consumers, exchange goods and services.

You are likely involved in the input market with your labor. In order to afford to purchase anything, chances are you have to go to work to afford those things.

The diagram is going to include two different kinds of flows:

Note, in our diagrams, the monetary flow will be represented in green and the physical flow in blue. We are going to start by discussing the interactions between households and firms. Then we will add in the government, and finally, the rest of the world.

1a. Households and Firms


Here is a simplified model so that you can see how the arrows are working to show the circular flow. 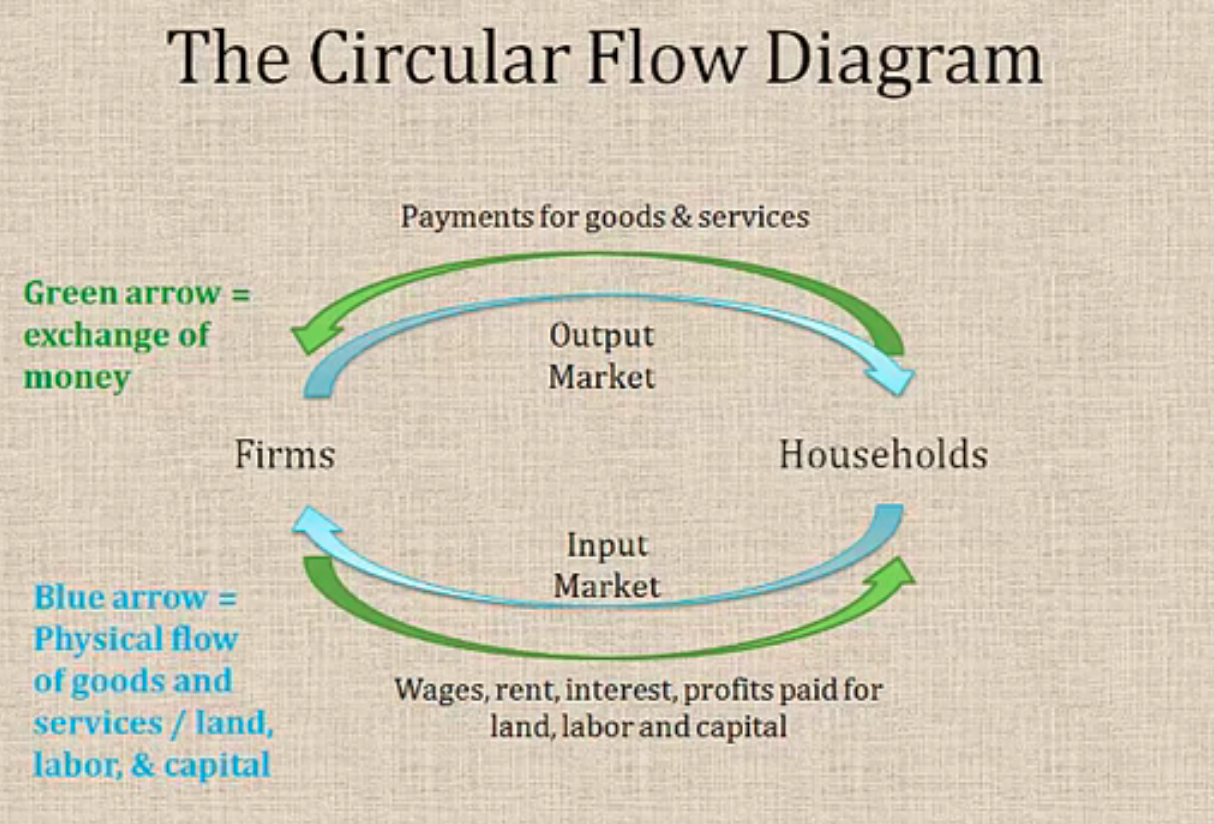 However, you did not steal them; you paid money to the grocery store in return for them. Therefore, you give money, and in exchange, the business provides you with the goods or services. 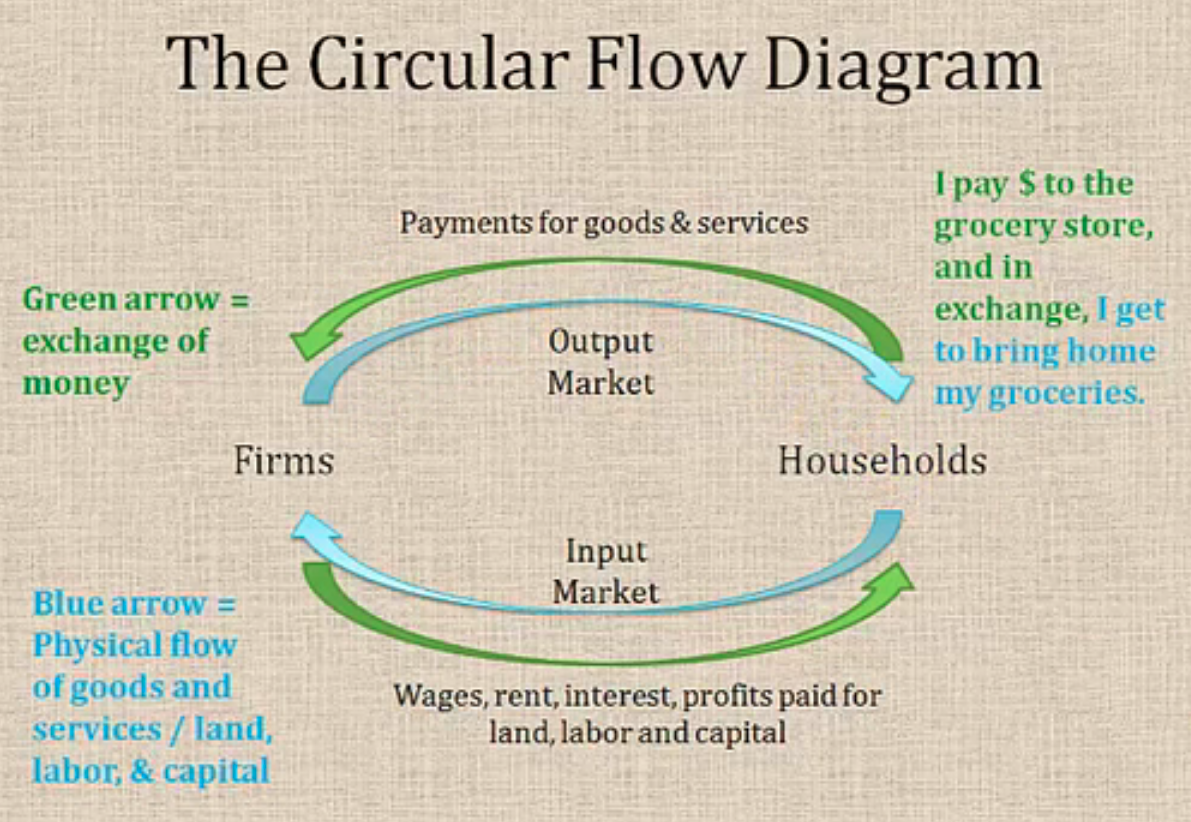 The input market is shown at the bottom of the diagram. Notice the green arrow, the monetary flow, representing the wages, rent, interest, and profits paid for land, labor, and capital.

So, for instance, you drive to work and provide your labor to your employer, and in return, your employer will pay you. 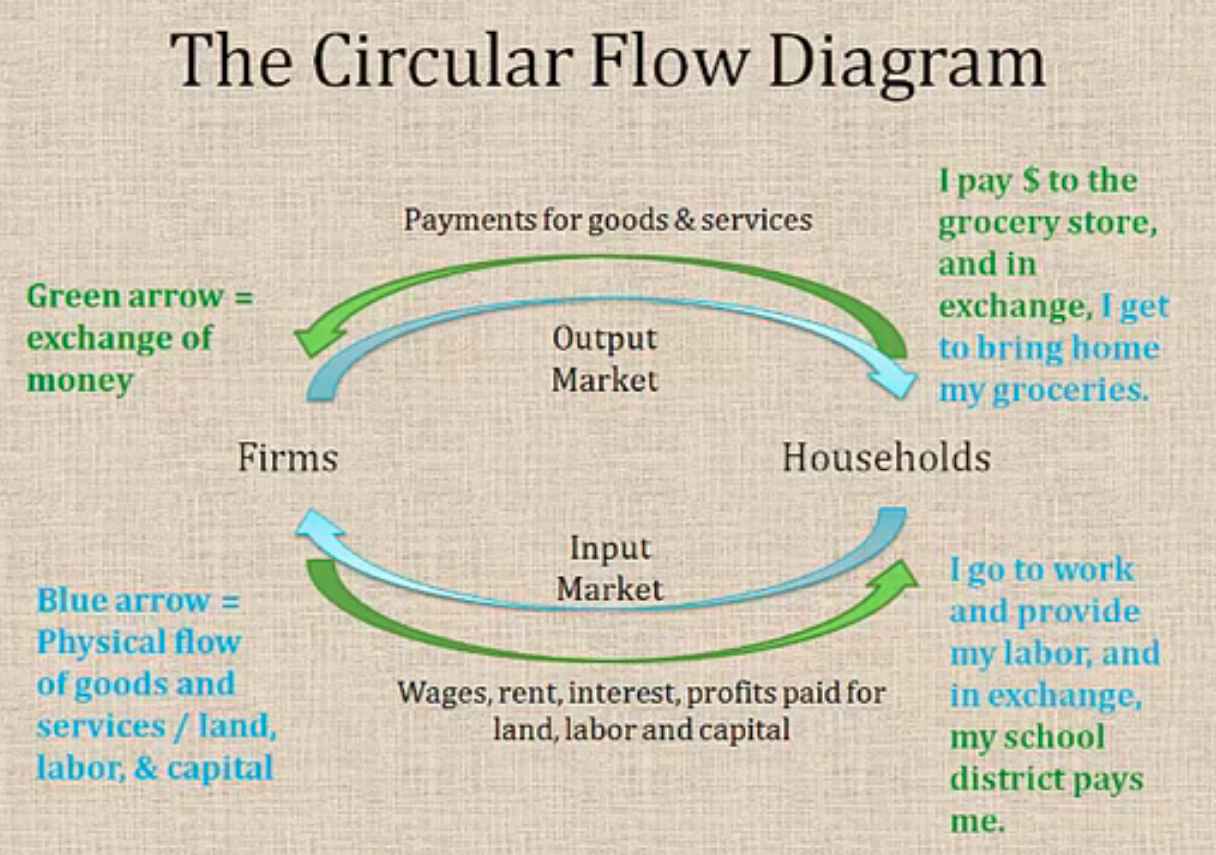 Speaking of different roles, here is another way to view the Circular Flow Diagram. 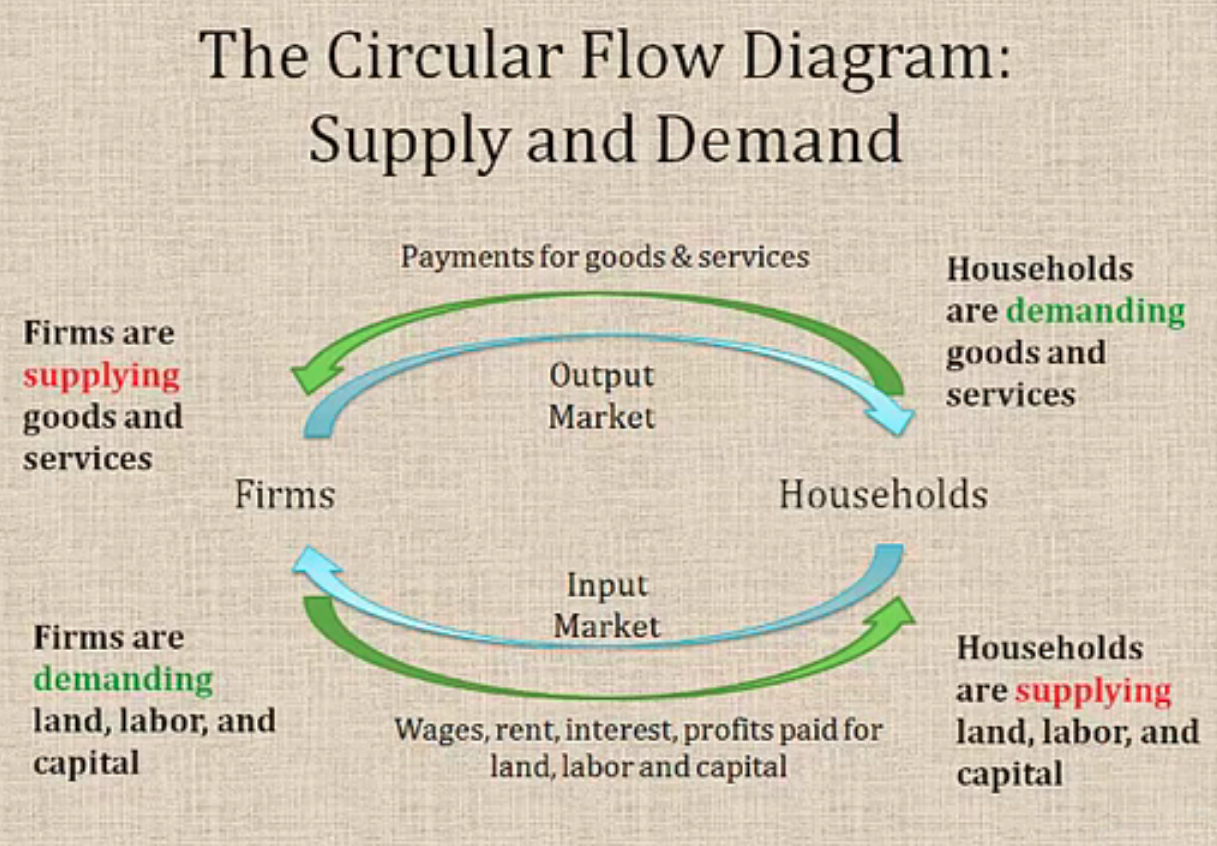 hint
Notice that the blue arrows representing the physical flow have been removed for simplicity's sake, but keep in mind that for every green arrow, there would be a blue arrow in the other direction. However, this diagram only shows the monetary flow. 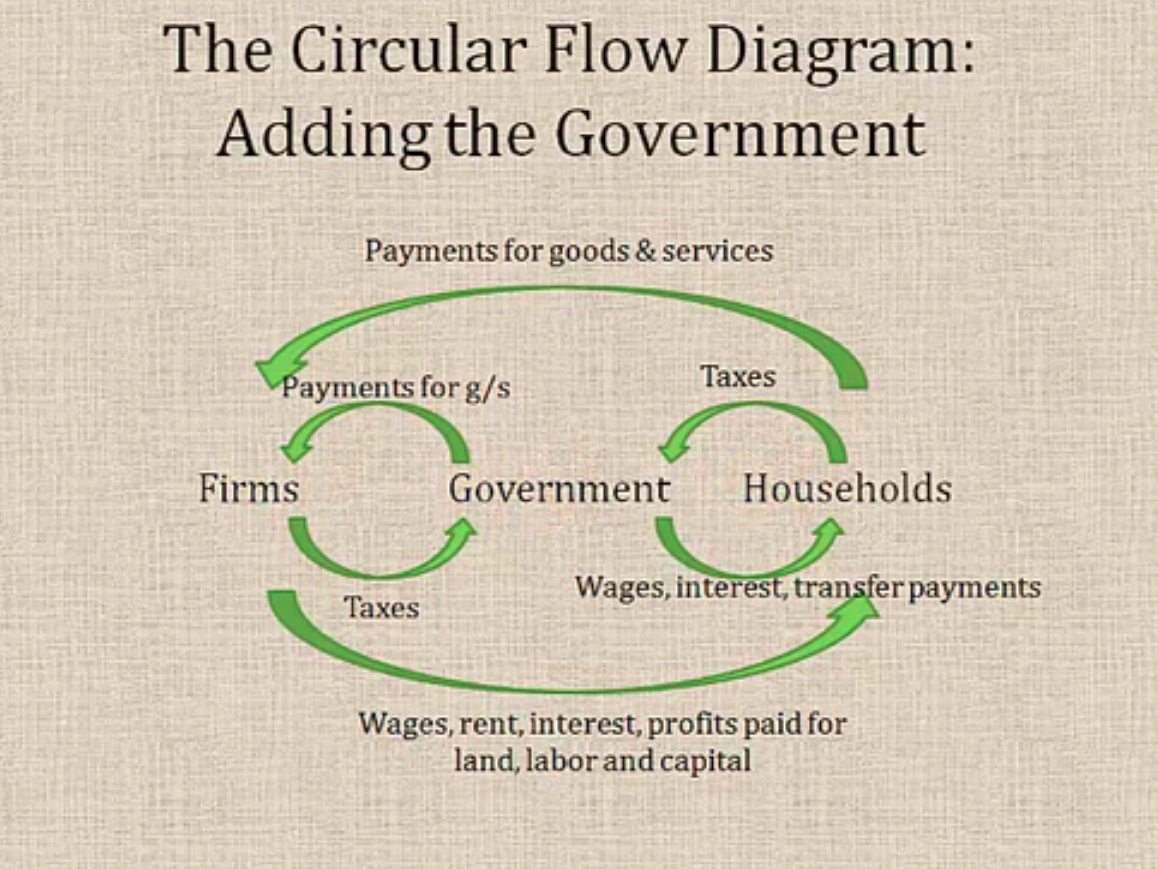 First of all, on the business side of things, the government collects taxes from firms, which is why the arrows show the firms paying taxes to the government.

However, the government also interacts in the output market with firms by paying for certain goods and services.

For example, if the government contracts out with a business to produce military goods for them, they would be paying money to that business for those goods or services.

Now, where the firms are paying taxes, the government is also going to intervene sometimes with things like subsidies or business regulations. It is important to note that these types of interventions can alter the original supply and demand market between firms and the government. 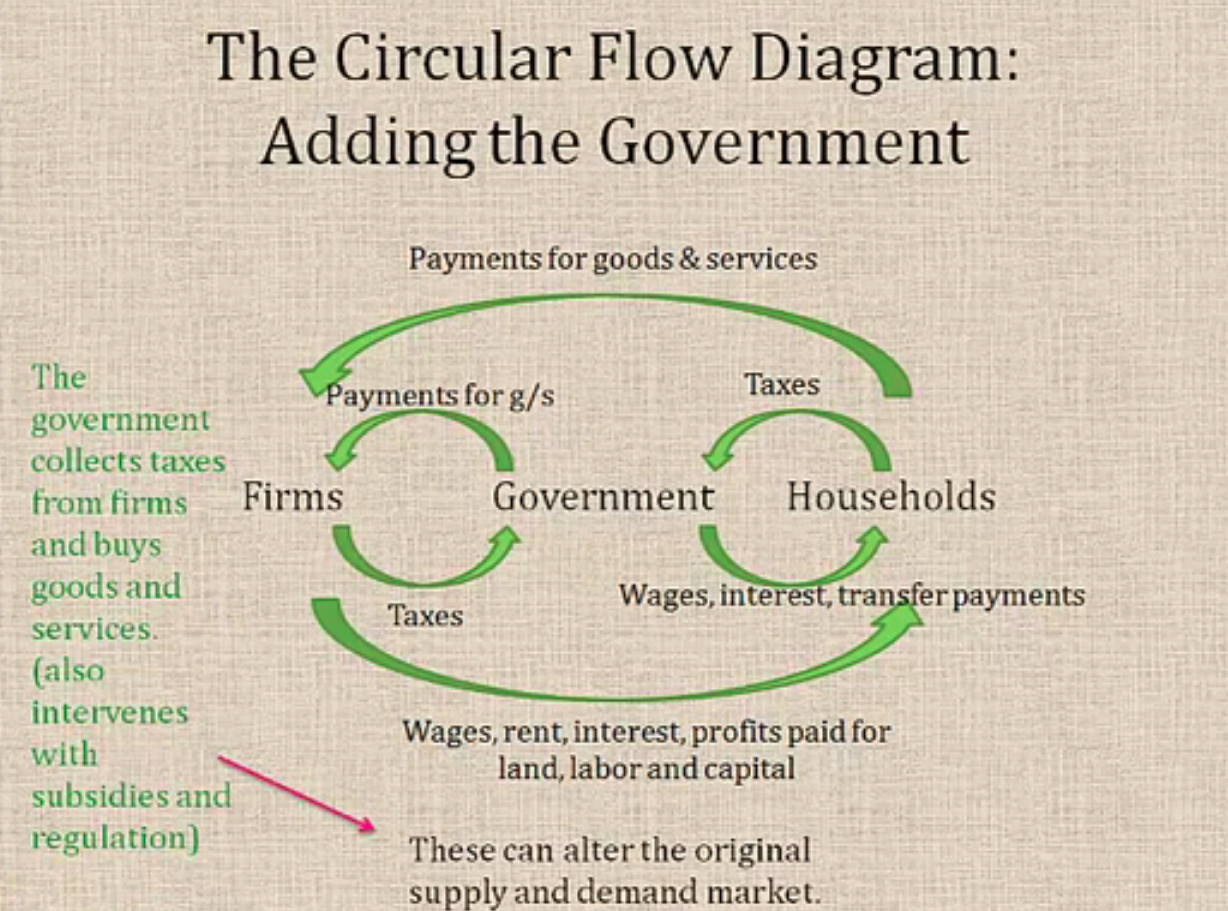 On the household side, the government collects taxes from us, the consumers. You can see the flow of the money going from households to the government. 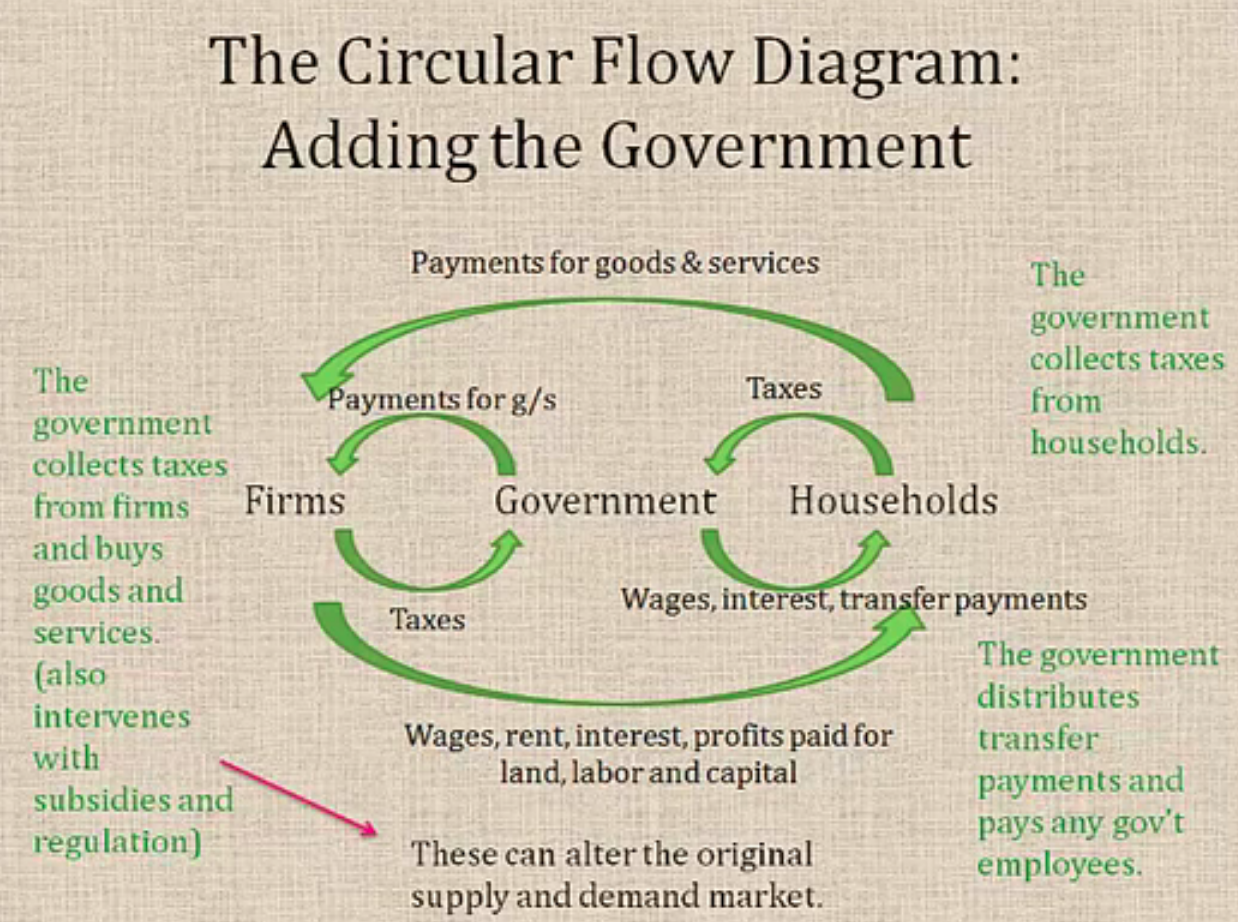 1c. Rest of the World


Finally, let's add in the rest of the world, placed at the top of the diagram below.

Now, there are two ways that we interact with the rest of the world: 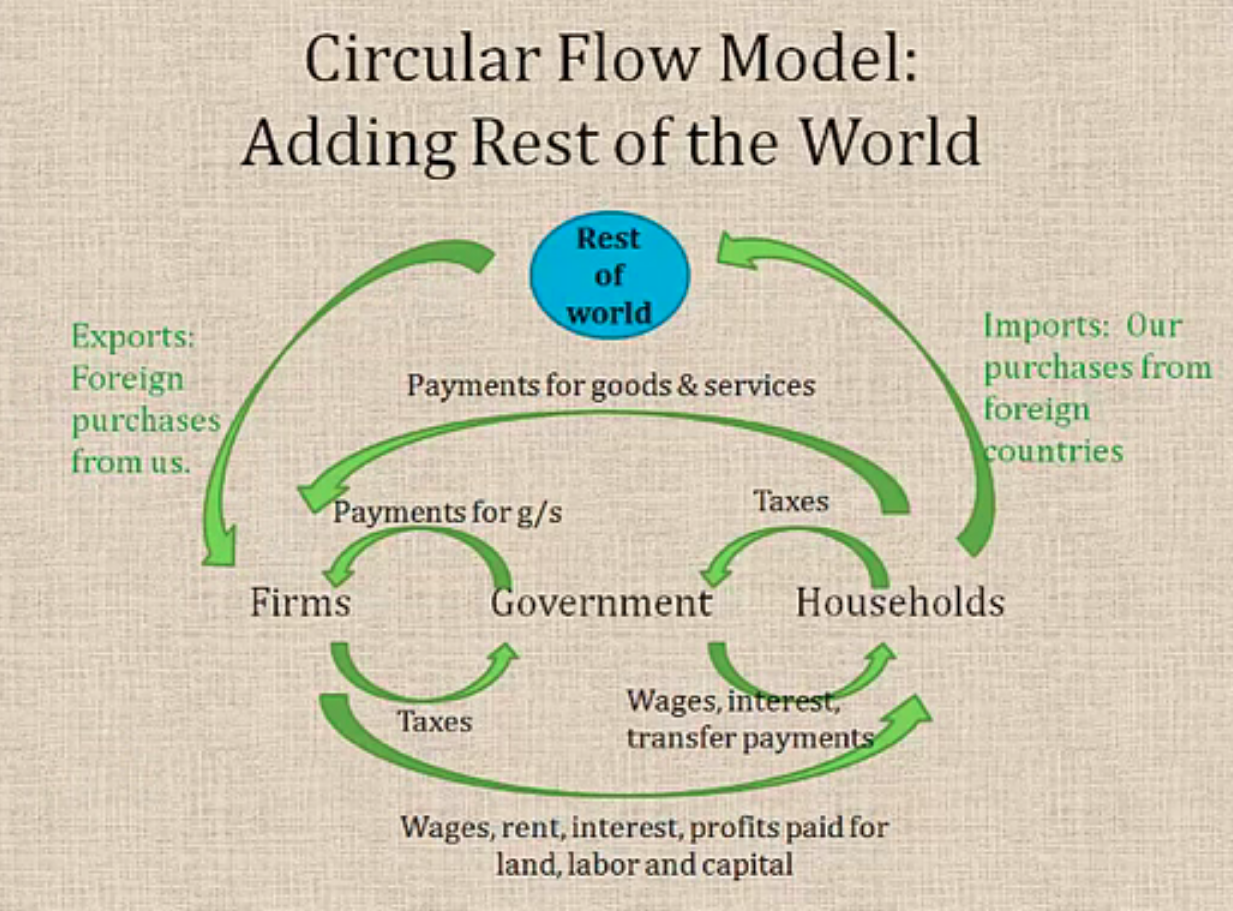 The first way, on the right of the diagram, is when we pay the rest of the world for imports.

Suppose we, the U.S., buy cars from Germany. We would have to pay Germany for those cars that were imported.

The left-hand side of the diagram shows when the rest of the world is paying U.S. firms for exports.

For example, when foreigners purchase grain from U.S. farmers, this flow of exports is represented by that arrow.

There are two different approaches to calculating GDP, the Gross Domestic Product. This will be the subject of a future tutorial, but for today's purposes, it is helpful to see these approaches on our Circular Flow Diagram.


One way of measuring how productive our country is to add up all of the things that we spend money on, represented by the output market in the diagram. Note, all of the output market arrows are highlighted in yellow so that you can see the way we would calculate GDP using the expenditure approach. 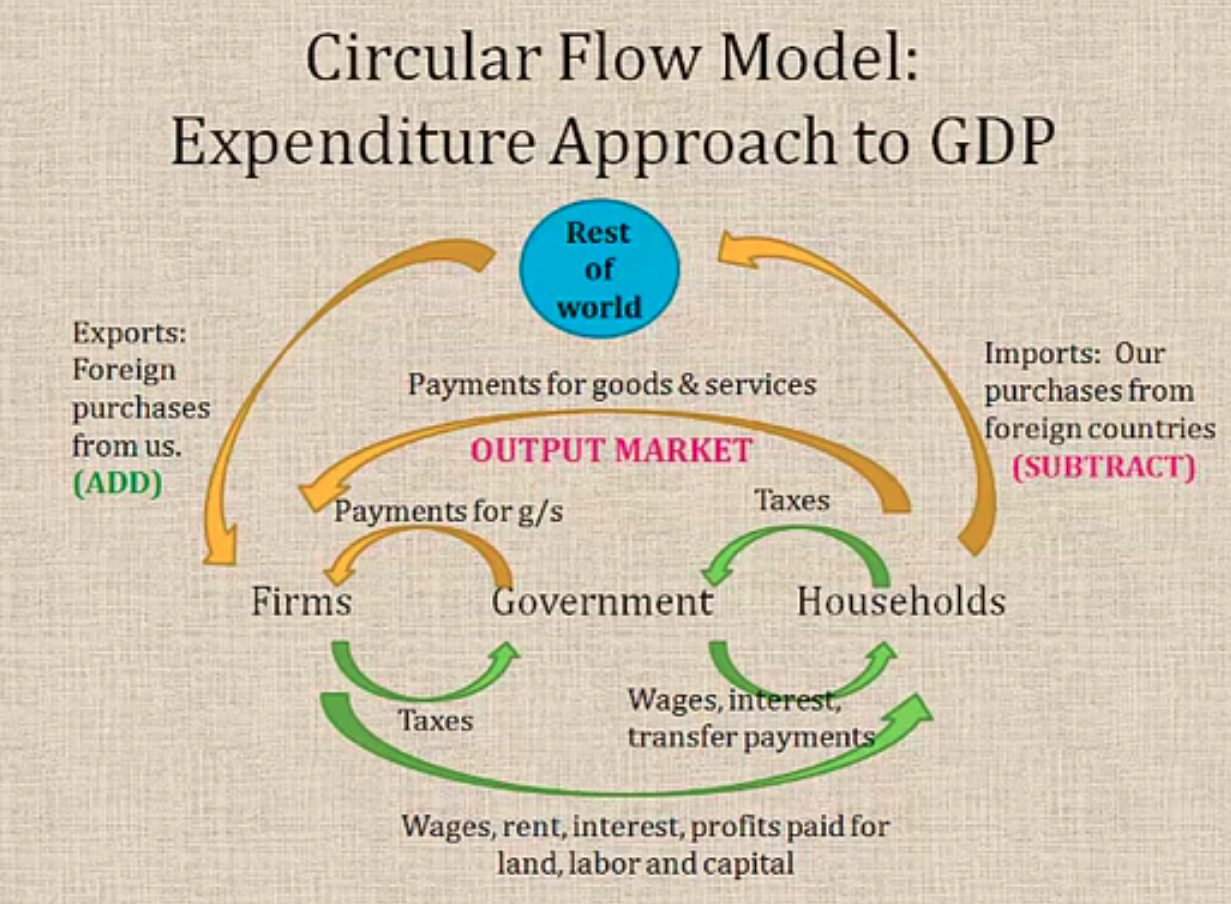 
Another way of calculating our GDP is by using the resource cost or income approach, factoring in all the income that people are providing. This is accomplished by adding up all of the interactions in the input market--the wages, rent, interest, and profits paid for land, labor, and capital. 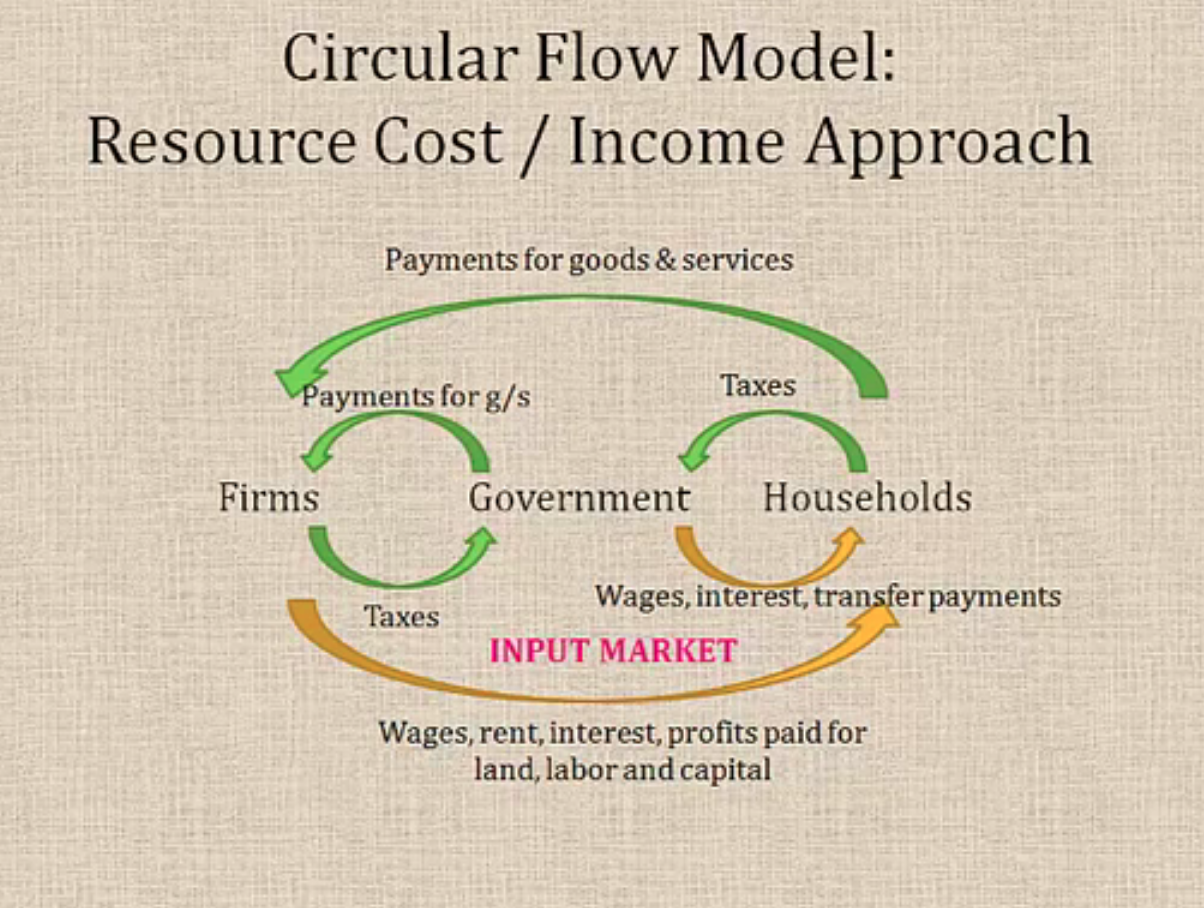 Believe it or not, these two different approaches, although vastly different, should arrive at the same number. This is because, if you think about it, every time you spend money somewhere up in the output market, it becomes a part of somebody else's income down in the input market.

summary
Today we learned about the circular flow diagram, and how it is a "big picture" of the economy, illustrating the interactions between households, firms, the government and the rest the world. We learned about the two different markets, input and output, and discussed how consumers, firms, and the government play different supply and demand roles, depending on the market involved. Finally, we learned how these two different markets represent two different approaches to calculating GDP: the expenditure approach and the resource cost/income approach.