Identify the benefits of cross training.

Tutorial
what's covered
This lesson discusses the importance of clearly defined roles and responsibilities. What are roles? Why are roles so important? What are the benefits of having team roles? How are roles defined? You will learn the answers to these questions by covering:

A role is defined as a group of highly related work activities and responsibilities generally performed by a single individual. Every member of a team will play one or more roles, or work functions, or a business function. For individuals playing multiple roles, like in the example below, those roles may be closely related or very different.

This IT project manager has a few different roles.

In this case, this person's roles are very different. In a smaller organization, it's common to find individuals playing more than one role. Their roles may also change more frequently. As you can see above, the person's job title is IT project manager, but her roles are different. Her job title is the umbrella for the roles that she plays, and the responsibilities within those roles.

big idea
The IT project manager's job title comprises everything she does. Beneath her job title, she may have several different roles. Within each role are her responsibilities.

Roles also change across different industries. Someone in a different industry has very different responsibilities within their roles that bubble up to their job title. Roles are usually formally assigned. This means you would probably find these roles in a job description. In the image below is a business analyst. She has three formal roles that are closely related. However, there are other informal roles that may be taken on voluntarily by employees. In this instance she is also the person who plans all the office birthday parties.

This business analyst is also the party planner. 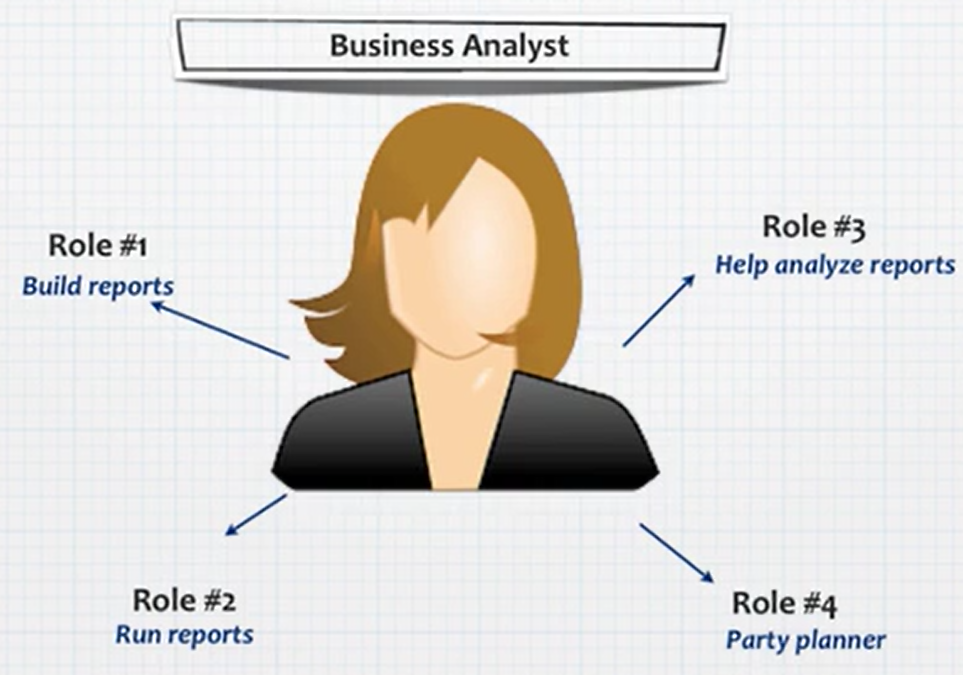 Having a recognized and valued role improves employee confidence and commitment to their work. Clear roles improve efficiency because everyone knows what they're doing.

When roles are too close, the work may become inefficient due to unclear responsibilities. You can imagine that this would be a really frustrating environment in which to work. 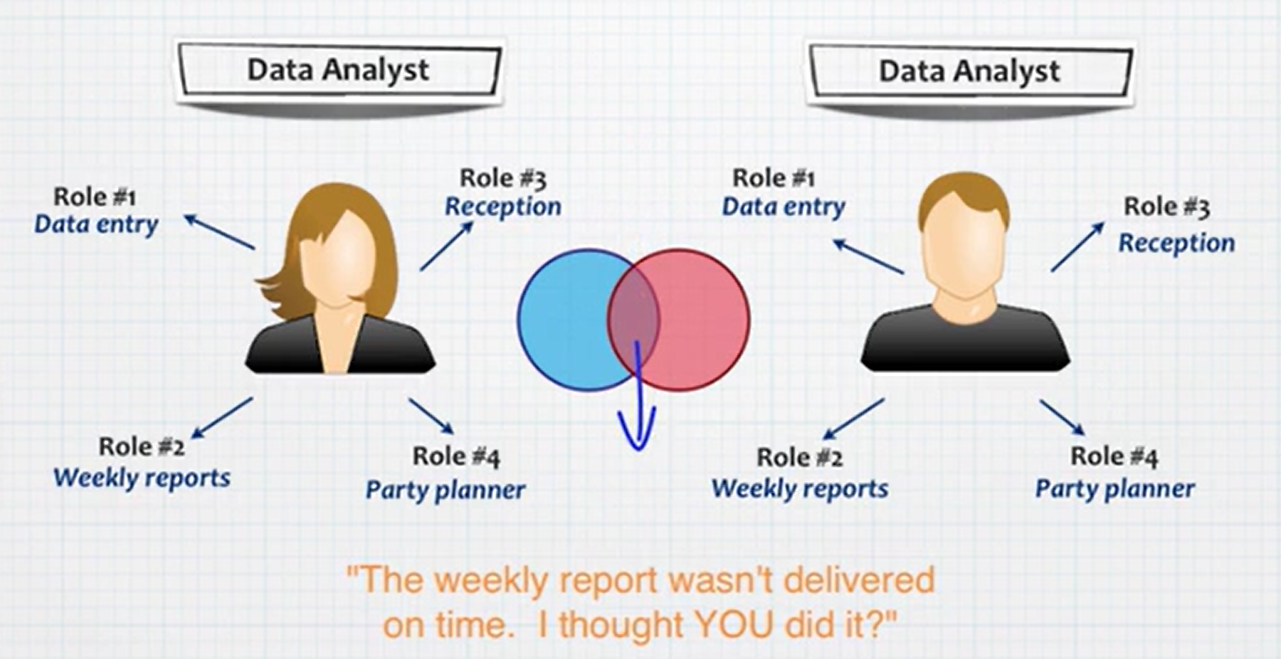 think about it
What happens when you have the opposite issue? What happens if there's too much space between two roles? Well, just take a look at an example of this with a graphic designer and a marketing manager:

You can see in the image above that the marketing manager is responsible for leading the team creation of a marketing plan. This may involve some deliverables by the graphic designer. If he doesn't loop her in, it's very likely that a task is going to be left undone or a goal will be missed. This will result in high frustration on both sides.

big idea
It's beneficial to determine all the roles that need to be performed by a team as a whole in order to achieve team goals.

How do you analyze team roles? The first step is to identify your goal. Then you can generate a list of roles needed to achieve it. Next, you will compare that to the team capacity, the number of people, and the bandwidth that they have.

You want to see if there are any gaps relative to expertise. Take a look at this diagram: 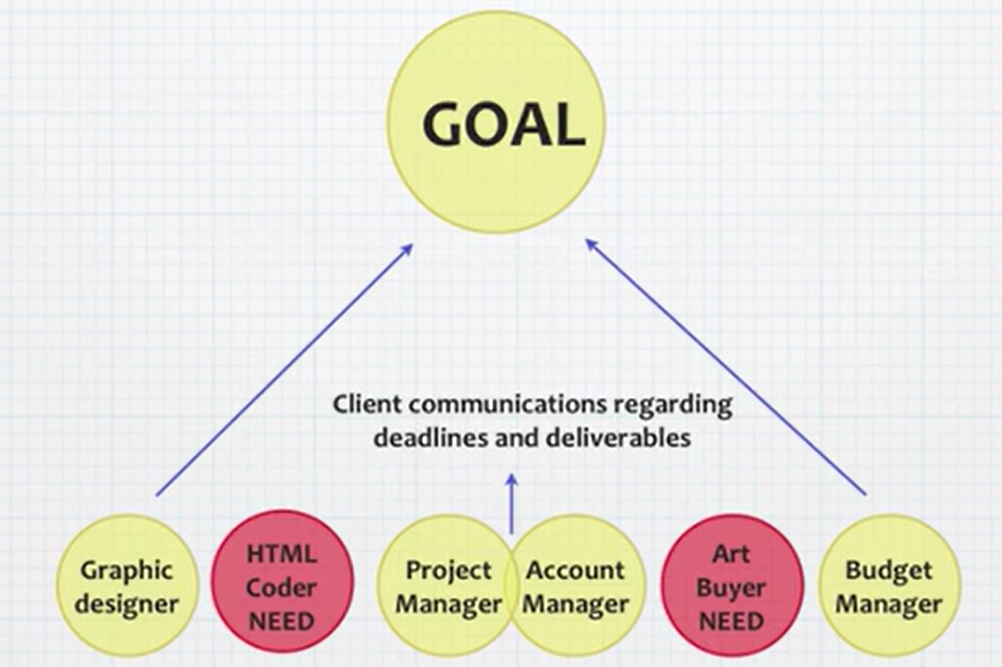 In this instance, you have gaps. An HTML coder and an art buyer are needed. Those skills are not represented in this current team.

Take a look at the project manager and account manager. These two roles are highly related, or interdependent. Depending on the workload, this role can be filled by one person, or it can be two individuals who work well together.

This is also where you can check to see if you need more roles than the team can reasonably handle. You want to make sure that your team members are not overworked. It's important to check their individual bandwidths as well, to see if you need to add more or fewer roles. Every team comprises strengths, and you want to make sure the team is efficient.

big idea
Analyzing team roles allows you to identify critical skill gaps. The roles are less likely to be assigned to those who do not have the required skill set. You want your team members to be matched with their strengths. You also want to make sure that individuals are not overwhelmed by too much work. You want to make sure that your team is efficient, and you certainly don't want excess team capacity wasted due to lack of direction.

Once all these roles have been analyzed at the level of the team as a whole, they can be assigned to individuals. Not only do you want to match these roles with the best fit in terms of a person's skill set but also with those individuals' interests and professional development goals.

You want feedback from your team members. It is important to consult them relative to the role and responsibility assignment as these decisions are being made. You don't want to approach them after the fact to say: "Guess what? You're going to be our graphic designer."

Roles in a team are associated with related responsibilities. These may include discrete tasks, ongoing work areas, management, monitoring, approaches, and perspectives, etc.

One team member may be an advocate for high-quality user experience.

Take a look at the diagram below to get a visual on how to define individual roles and responsibilities. It's important to clearly define these roles by explicitly indicating the responsibilities associated with each role. 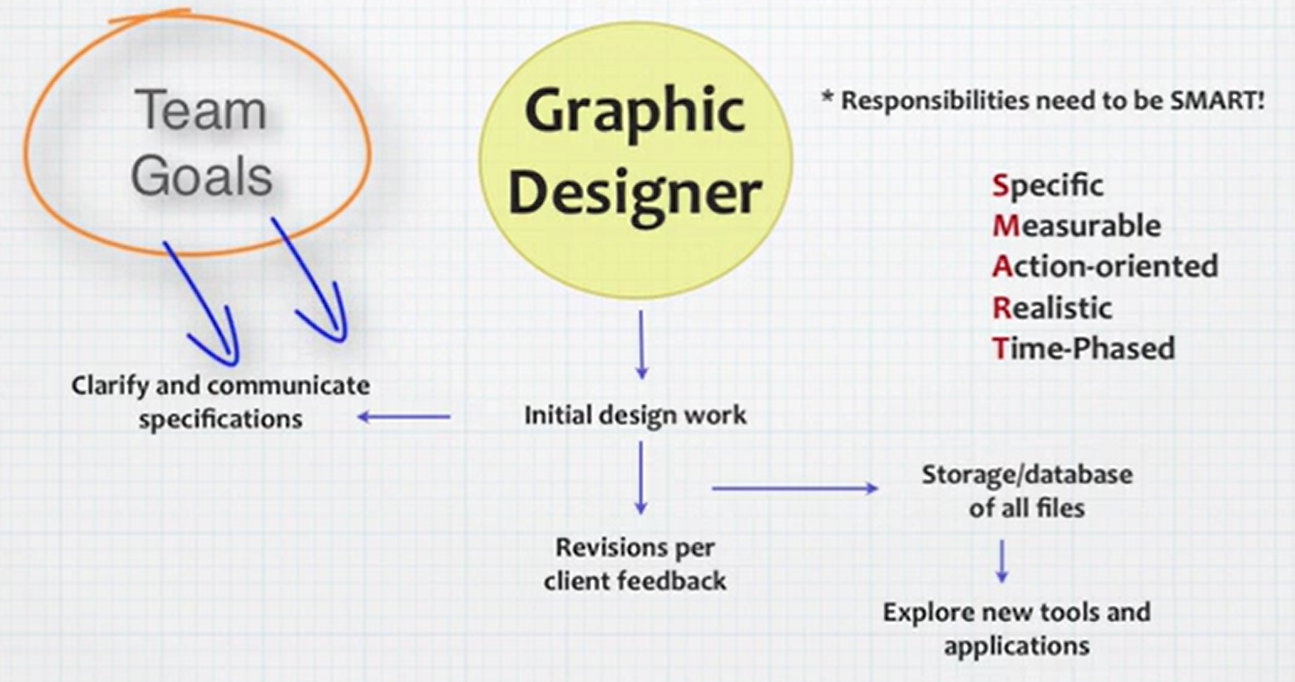 You can see there's a plethora of responsibilities beneath the job title of graphic designer. The relationship between goals and responsibilities should be very close. A team goal and personal goals should all be in alignment. They should also be SMART goals: specific, measurable, action-oriented, realistic, and time-phased.

think about it
Why do you need such clearly defined roles? One reason is to minimize or eliminate overlapping responsibility to avoid duplication of effort.

You can see in the diagram below that two people have quite a bit of overlap between them. When individuals have similar or interacting roles, it's important to define the boundaries and limitations between them by clearly indicating responsibilities. This avoids conflict relative to gray areas between the two. 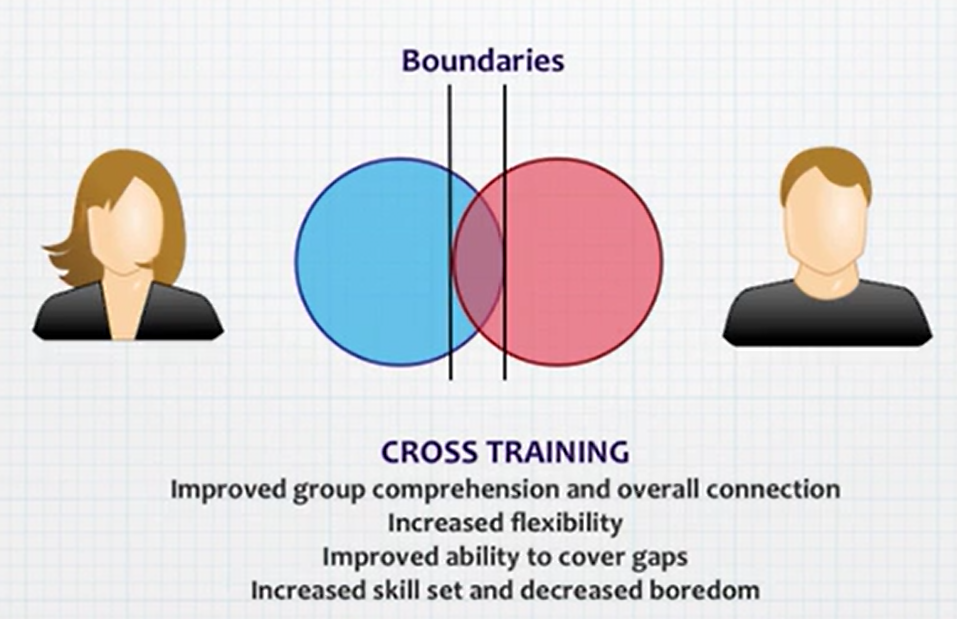 Although discrete roles are beneficial, there are also many benefits to training employees to have expertise in other roles. This is called cross training. Cross training improves group comprehension and overall connection. They understand each other. This also means increased flexibility. Your team as a whole benefits from that.

There will also be improved ability to cover gaps in case you lose a team member. It's always beneficial to have increased skill set and decreased boredom. You want to enhance the employees' skill set. While cross training is beneficial, you still want to make sure that roles and responsibilities are clearly defined.

Organizational charts can help with defining roles and responsibilities. These charts generally include the reporting structure for each individual, along with their name and job title.

This example simply has job titles. In some cases, an organizational chart may include goals, roles, and responsibilities. 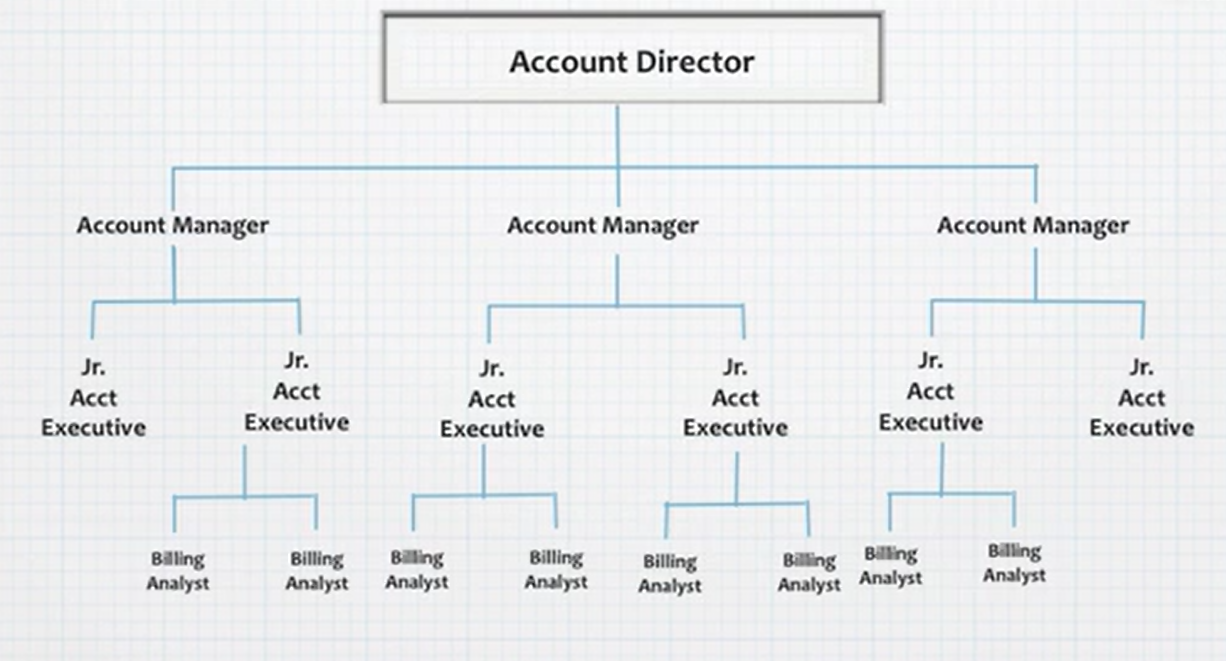 Another chart often used to indicate responsibilities across the team is a RACI chart. The RACI chart will indicate who is consulted. RACI stands for responsible, accountable, consulted, and informed. It makes clear to all team members who is accountable for what responsibility and what their contribution to each project will be. 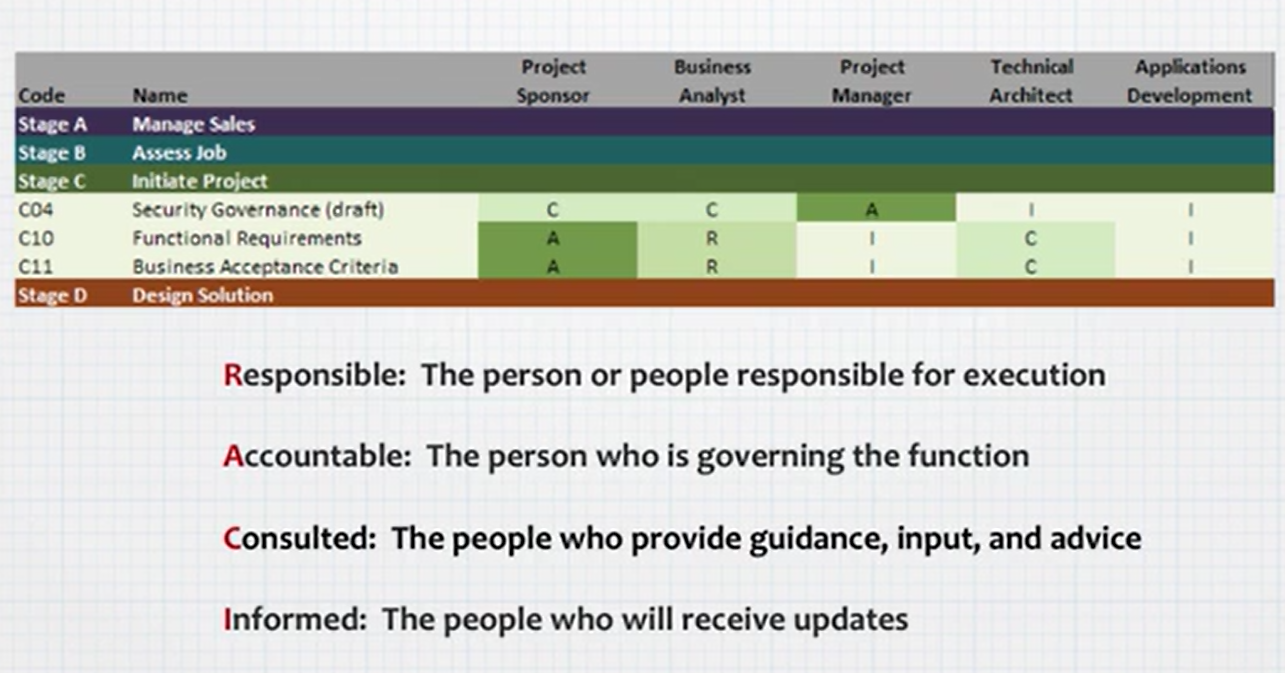