After reviewing this learning packet, you will have a good idea of which type of graphic to use to better communicate your ideas.

This learning packet will cover common types of graphs and charts and the rhetorical uses of each.

When writing a research paper or preparing for a presentation, consider incorporating graphic representations of your data.  Readers often prefer visual representations of quantitative research since graphs and charts make it easier for readers to understand complex relationships and numbers.  Compare the following descriptions of the unemployment rates and median weekly earnings based on education level.  Which description is easier to understand?  Why would you consider using graph to communicate the information?

Choosing the best graphic for your information

There are many choices for graphic representations.  Knowing which to use can seem overwhelming at first.  Let's go over some common types of graphs and charts first and then we'll discuss which one works better for you.

4. Pie charts compare segments of data to the whole picture.

5. Flowcharts show the steps of a process.

6. Line graphs show the relationship between a given variable and time.

Tables are a simple way to visually display data in a research paper or presentation.  They emphasize numbers and categories.  Tables are great for sharing numerical data in an objective format.  However, readers must infer relationships or trends unless they are explicitly mentioned in an introductory sentence.

Tables consist of headings (e.g. Dogs Scoring Above Average on Intelligence by Breed and Gender) and sometimes, but not always, subheadings (e.g. Note. Average score =150. No animals were harmed during testing).  They are divided into rows which are read horizontally and columns which are read vertically.  Tables are most useful for smaller amounts of data.  Readers may be overwhelmed if there are too many rows and columns.

Bar graph was retrieved at: http://www.brunswick.k12.me.us/bjh/depart/curric/higgins/worldanimals/d/cheetah18d/images/graph.gif

Simple bar graphs are used to show contrasting information.  They are arranged vertically with numerical data on the left side and items below their respective bar.  A common mistake is to arrange the bars with no apparent pattern.  Try to order the bars so they make sense with the message you are trying to send.  For example, the above graph highlights how much longer gorillas are compared to other animals.  The bars increase in height as they move to the right.  The creator of this graph has also included the total above each bar.  This is a good strategy if you want your readers to remember specific numbers and not just relationships.

Image chart was retrieved at: http://www.elloandfriends.uni-osnabrueck.de/wp-content/mu-plugins/bp-wikis/pmwiki-2.2.0/uploads/Sociolinguistics/DialectsintheUSA.jpg

Image charts, unlike tables, do not emphasize specific numerical data.  Instead, they emphasize the distribution of data on a map or diagram. Image charts are best used when the image is easily recognizable for the audience.  For example, the above image chart shows the distribution of the different dialects within North America. It's easy to see that there are four major dialect areas: the West, the South, the North, and the Midland.

Pie chart was retrieved at: airLeakagePieChart.gif

Pie charts are easy to create and, if effective, easy to understand.  The circle represents 100% of the whole and the different slices represent a percentage of the whole.  Pie charts are especially effective if one piece is much larger than the others. For example, say you wanted to emphasize the fact that the majority of the school budget is going towards sports compared to the arts or science, a pie chart can be a dramatic representation of this claim. This chart was retrieved at: http://tinypic.com/view.php?pic=s58bj6&s=5

Flowcharts are a combination of bubbles and arrows which show the direction of steps in a process.  Flowcharts are especially useful for communicating "how to" information. For example, flowcharts may be used to explain how to conduct an experiment, how to apply to a graduate program, or how to change a flat tire.  They may also ask "yes" or "no" questions which lead to different end results. Flowcharts do not display quantitative data like the other charts and graphs we have covered in this learning packet.  Instead, they emphasize the process. 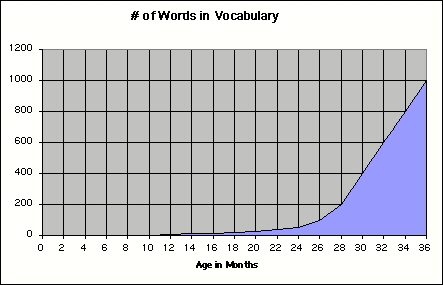 Graph was retrieved from: http://www.spiritlakeconsulting.com/SLC/sharedfiles/library/devpsych/infantsoc1.htm

Line graphs show trends in data.  Most of the time, they show the relationship between a given variable and time.  Time increases on the horizontal line, moving from left to right.  The vertical line shows the other variable which also increases as you ascend.  The example above shows the trend in vocabulary learning over the first 36 months of a baby's life.  It shows a dramatic increase in number of words learned after 26 months. Line graphs allow the audience to make predictions.  Looking at this example, one could assume that babies continue to learn more and more vocabulary as they grow older.

Use a line graph if you are trying to show an increase or decrease in something over time and want to persuade the audience that this trend will continue.

This figure checklist is taken from Purdue OWL: