Or
Close Popup
+
2 Tutorials that teach Components of Communication: Connotation, Denotation, and Contextual Meaning
Take your pick:
Previous Next

Recognize the difference between connotation, denotation, and contextual meaning as part of communication.

Tutorial
what's covered
This lesson covers verbal, nonverbal, and components of communication in context. You will look at:

Oftentimes people think that communication is what you say. What you may not realize is that what you say is influenced by your body language.

Facial expressions can say a lot. Are you smiling or frowning? If you are frowning you might be saying you are pained.

What are your gestures? Are you nodding your heads yes or no? What is your body position? Are you slouched or leaning forward? What is the tone of your voice? Is it sharp and loud or timid and apologetic? These things all tell a lot.

The context of a situation can also give information. Is there a negative history between the individuals communicating? Is the topic being discussed hitting a nerve with you? Is the attitude positive or negative toward the person communicating? Even environmental factors, such as the temperature of the room, can influence context.

think about it
You could sit in a meeting and not say a word, yet communicate to everyone around the table.

did you know
There was some research conducted by a psychologist named Albert Mehrabian in 1967. He indicated that body language accounts for 55% of our communication; our tone of voice, 38%; and verbal, only 7%.

Imagine your employee has said something in a meeting.

This does not mean that you shouldn't choose your words carefully, or that words don't matter. It does mean that it's important to align them with your nonverbal cues.

You probably send tons of emails. The reader/receiver does not have the luxury of seeing your nonverbal cues. They don't have access to the tone of your voice. They can't see your body language. There's more emphasis here on the actual words.

You can see here in this email, there's no tone necessarily written here, but you understand that this is a very serious message from the words: 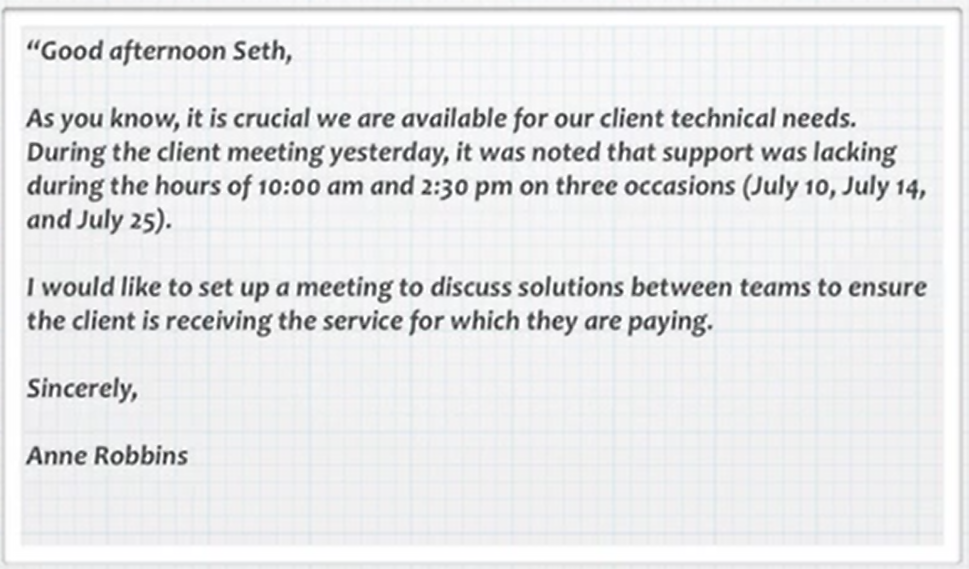 In many cases, it's easy for tone to be misunderstood in the case of written communication even if the writer is very careful. Sensitive, complex, or highly nuanced topics should be handled in person.

Every word and every phrase has a meaning, whether it's denotation, connotation, or contextual meaning. Oftentimes there could be a difference between them.

The dictionary definition of a word or phrase.

The tone or feeling of a word or phrase.

The meaning of a word or phrase within a particular context.

Take a look at the word "sick." The denotation of that is to be ailing physically or emotionally. The connotation of sick is generally negative, but watch how it can change:

When different groups work together, they start to develop their own language. Maybe in this instance you have a group of graphic designers, and they use the word "sick" to mean something good. "Sick" now all of a sudden has a positive connotation.

If they were to be communicating outside of their group, this could be a common source of miscommunication. On the other side, if you're outside of that group, and they're talking about the word "sick," it's important to not assume that you know the meaning of it.

In this image you have have an employee that sends out an email that says, "I need you to create a flowchart for this project."

The denotation of "flowchart" is a visual representation of responsibilities and deliverables identified by shapes. The connotation of a flowchart is very rigid and structured.

The people in this group communicate all the time, so they have a common understanding of what their flowchart is. People who are not in that group or new to the group may not understand.

did you know
There's a way to remedy this. These people need to be clear and concise with their communication. They need to know their audience. If they're outside of their internal group, they need to be able to tweak their message. Maybe they will need to explain what is needed with a flowchart.

Communication should be free of bias to ensure it's neutral. You want to ensure the intended message was received correctly. Ask yourself: how was my tone? Was emphasis placed where it needed to be so this person is clear on what's expected?

Note groups or individuals with different cultural backgrounds. You want to be sure that the intention of your message has been received correctly. It's also important to communicate clearly to groups of people that have experienced ineffective communication. Pay special attention to those complex communications. If there are fewer roles established, follow through to make sure team members understand what they're doing.

summary
The components of communication are mostly nonverbal cues that, in some cases, trump what is said. Nonverbal communication is things such as facial expressions, gestures, body position, tone, and the context. It is important to be careful in written communication because it lacks nonverbal cues. Contextual meaning can change depending on situations and the groups interacting. It's really important to make sure that you take into consideration cultural backgrounds and other professional experience so the communication is clear and concise.

Source: This work is adapted from Sophia author Kelly Nordstrom

The tone or feeling of a word or phrase.

The meaning of a word or phrase within a particular context.

The dictionary definition of a word or phrase.