Or
Close Popup
+
2 Tutorials that teach Conciliation as a Conflict Resolution Process
Take your pick:
Previous Next

Conciliation as a Conflict Resolution Process

Identify the objectives or advantages of conciliation as a conflict resolution process.

(more)
See More
Tutorial
what's covered
Conciliation is one of the many conflict resolution methods.

This lesson will provide a more in-depth focus on the following:

1. CONCILIATION AS A CONFLICT RESOLUTION PROCESS

Conciliation is a conflict resolution process in which a third party, or conciliator, meets privately with the conflicting parties in order to gain concessions from each.

A conciliator is similar to a mediator in that a conciliator will pay attention to the emotional tone and emotional issues between the parties, such as:

The conciliator will look at these issues and discuss solutions with each of the parties in the hopes that they can come to a settlement.

Unlike a mediator, the conciliator’s goal is to gain concessions, or agreements to sacrifice part or all of a need in exchange for another, from each party rather than to to meet all of both parties’ needs.

An agreement by a party to sacrifice part or all of a need or goal, usually in exchange for a gain in another area. 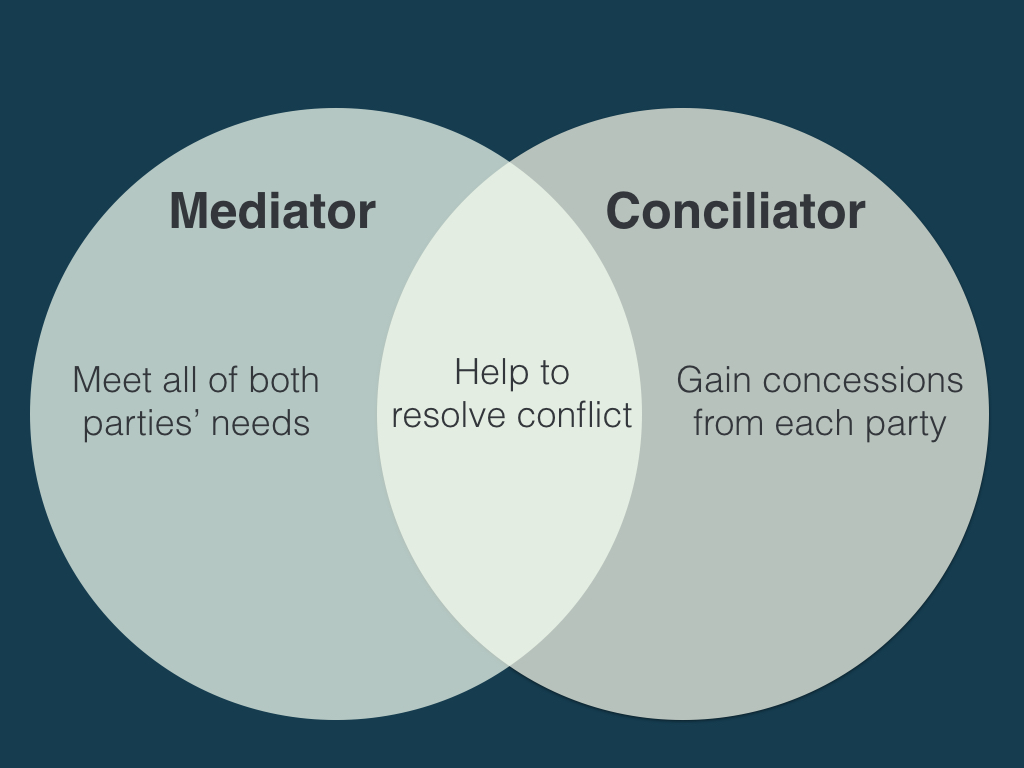 Because conciliation usually occurs when the parties are either unwilling or unable to meet in person, a conciliator will probably meet with the parties in separate rooms, or even separate buildings.

Parties may need to meet separately for a variety of reasons, including:

In both these situations, the conciliator would be going back and forth between separate rooms or buildings in different areas for these meetings.

think about it
Based on what you now know about conciliation, can you think of a scenario in which conciliation would be the preferable method of resolving a conflict?

summary
In this lesson, you learned about conciliation as a conflict resolution process in which a conciliator looks to gain concessions, or sacrifices, from both parties. You now understand what conciliation looks like in action, and that the conciliator will most likely need to meet with the parties separately.

An agreement by a party to sacrifice part or all of a need or goal, usually in exchange for a gain in another area.