At the end of this tutorial, the learner will understand the range of situations in which conflict resolution can be applied, and will know some of the major successes of the field

(more)
See More
Tutorial
what's covered
In this lesson, we’ll learn what conflict resolution looks like in action by discussing:

1. WAYS OF RESOLVING A CONFLICT

You have probably seen television shows with lawyers and court cases. There are two parties who have a dispute, they come into court, they stand before a judge, and the judge makes a decision. This is an example of litigation. 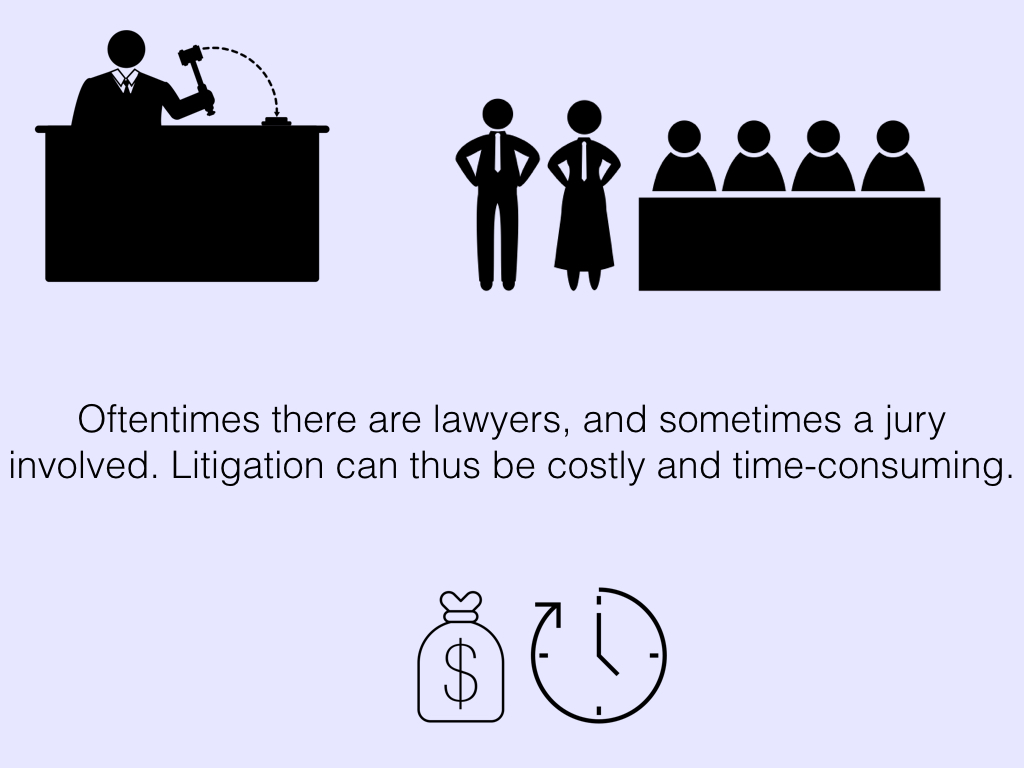 A process of resolving a dispute through civil court.

An alternative to litigation, arbitration is a process of resolving a dispute by seeking a decision from a neutral third party outside of the court system.

A lot of legal documents have arbitration guidelines written into them. If there's a dispute about something in the document, it can be settled by a third party who makes a binding decision outside of court.

A process of dispute resolution by seeking a decision from a neutral third party outside of the court system.

Facilitation, as opposed to arbitration and litigation where the third party has sole decision-making power, is a process in which decision-making, communication, or negotiation is aided by the actions of a neutral or outside party.

A facilitator is typically a neutral party working with a larger group. Perhaps this group has to make a decision, but there's dissent within the group, and it's difficult to reach a consensus.

The third party facilitator is brought in to help the group have this conversation, and come to some resolution.

A process in which decision-making, communication, or negotiation is aided by the actions of a neutral or outside party.

There's also conciliation, in which the conflict resolver meets privately with the parties involved in the dispute, seeking to gain concessions from each party.

This often happens when you have quite a bit of hostility, and the parties don't want to be present in the same room together; the parties prefer to meet separately while still having their needs communicated.

The conflict resolver will go back and forth, bringing concessions from one side to the other, hoping to come to some middle ground.

While there might be a point when maybe the parties both agree to meet face to face, the goal is to reach resolution through the conciliation process.

Shuttle diplomacy is another technique that is similar to conciliation in which mediation is provided for parties who cannot meet in the same location.

Similar to facilitation and conciliation, mediation empowers the disputing parties to make their own decision. In this form of conflict resolution, a neutral third party helps disputing parties to communicate effectively in order to alter their relationship, reach an agreement, or both.

The word neutral is key here because the mediator is not involved in the decision, and doesn't have any particular interest in which way it goes. The role of the mediator is simply:

A form of conflict resolution in which a neutral third party helps disputing parties to communicate effectively in order to alter their relationship, reach an agreement, or both.

Additional techniques, which you'll learn more about in other tutorials, include collaborative law and restorative justice. Collaborative law, also known as divorce mediation, is a conflict resolution process used to settle financial and/or child care and custody issues between divorcing or separating couples. Restorative justice is a group of conflict-resolution/alternative dispute resolution processes used in the wake of an offense, or a criminal act that may bring an individual into contact with the justice system.

Can you think of some examples of conflicts that might be a good fit for each type of resolution process discussed above? Have you ever used any of these methods for a conflict you've been involved in?

Let's now look at some ways in which mediation has been very successful at various levels:

Police may refer cases to community mediation groups in order to focus on the crimes that need their attention. These can be cases such as disputes between neighbors, or other people within the community.

Essentially, anything that the police think could be solved by a community mediator falls under this category.

Truth and regulatory stakeholder negotiations are governed by the Federal Mediation Conciliation Service, which will bring together the government agency and those affected by upcoming rules or regulations.

The goal is to jointly right the regulation, so the process brings two potential antagonists together and creates partners out of them in order to solve the dilemma.

Another successful federal program is the Victim Offender Reconciliation Program (VORP), which brings an offender face to face with the victim so that the offender can hear the impact of his/her actions, take responsibility for what he/she has done, and make amends.

The goal here is to try to make it right. Particularly among juveniles, this has turned out to be effective. If a juvenile or first-time offender has committed a crime such as shoplifting or property damage, a mediation program can bring the juvenile face to face with the victims that have been hurt. The offender is able to really hear the impact of the crime, and then do some form of restitution.

Divorce proceedings are another example from within courts. Instead of going through litigation in a courtroom, more and more couples are seeking mediation as a means of divorce.

summary
In this lesson, you learned the ways of solving conflict: litigation, arbitration, facilitation, conciliation, or mediation. You also learned some ways that mediation is successful in handling a variety of conflicts, such as those between a victim and an offender. You now understand that even though these resolution processes differ in their execution, they all have the same intent of reaching the best solution possible for both parties.

A process of dispute resolution by seeking a decision from a neutral third party outside of the court system.

A process in which decision-making, communication, or negotiation is aided by the actions of a neutral or outside party.

A process of resolving a dispute through civil court.

A form of conflict resolution in which a neutral third party helps disputing parties to communicate effectively in order to alter their relationship, reach an agreement, or both.