Recognize the high costs of consumer loans and how to avoid them.

Tutorial
what's covered
In this lesson, you will learn how to identify high-cost consumer loans and how to avoid them. You will consider how strong problem solving skills can help you make wise decisions. You will understand you may need to use your agility skill to make sure you have enough for an emergency. Specifically, this lesson will cover:

Are you interested in a video preview of this lesson? Click play to learn about the risks associated with high-cost consumer loans. When you’re through, move on to section 1.

When dealing with lenders, you have many choices. Lenders can be generally classified into two different categories, as shown in the following table.


big idea
When given a choice, most consumer advocates recommend using products and services provided by mainstream financial service providers.

The most popular alternative loan is a payday loan, which is a short-term loan designed to be repaid within a few weeks when the borrower receives a paycheck. Here’s how a typical payday loan transaction occurs.

Consider Tisha who works full-time and goes to school. Her car just broke down, which is a real problem because she needs it to get to her job and classes. Her mechanic told her that it would cost $500 to repair it, which is more than she currently has in her savings account. Because Tisha doesn’t have the cash or a credit card to pay for the repair, she panics and visits a payday lender, who agrees to lend Tisha $500.

The process is shown in this illustration. 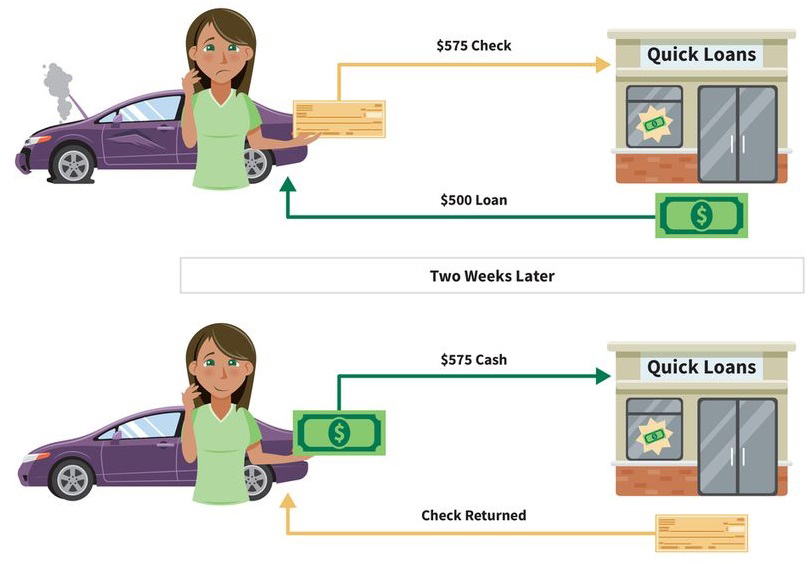 If Tisha doesn’t pay back the loan in 2 weeks, the lender will attempt to cash the check. If Tisha has insufficient funds in her account, she’ll pay a bank fee and owe the payday lender even more money. Rather than have this happen, Tisha and many payday loan users often roll over one loan into another every few weeks by extending the terms of the original loan. They then get caught in the unfortunate trap of incurring a new fee each time a loan is rolled over.

What if Tisha had been more knowledge about how payday loans work before she chose to utilize one? Could she have used her problem solving skills to consider alternatives that may have been a better choice? Knowledge is power. The more you know before a problem occurs, the better use you can make of your problem solving skill.

A short-term loan designed to be repaid within a few weeks when the borrower receives a paycheck.

1b. How to Calculate the APR of a Loan

To calculate the approximate annual percentage rate (APR) on a payday or alternative loan that is based on fees rather than a stated interest rate, you’ll need to perform a few simple math calculations. In Tisha’s case, she obtained a 2-week (14 days) loan for $500 with a $75 loan fee. The illustration below shows how to calculate the APR of this loan. 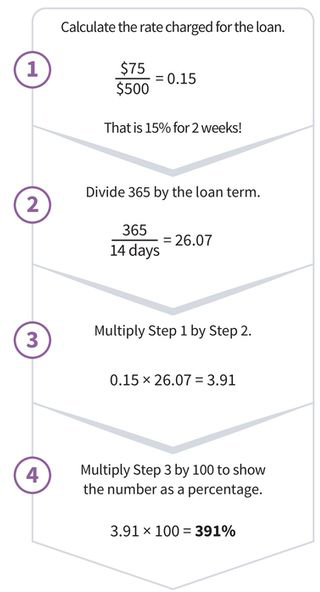 Take a breath. Yes, that is an APR of 391%! This is the APR if no other fees are charged and assuming Tisha pays off the loan on time.

Although these companies offer services valued by their customers, the fees and implicit interest rates for these types of loans and services are very high, ranging up to an APR of 400%. The interest rate charged by alternative financial lenders is much higher than the credit-riskiness of their customers might indicate. However, many consumers believe that the convenience and transparency of the alternative financial system (i.e., a clearly stated fee for any service) is worth the higher costs when compared to the mainstream financial system.

2. Pros and Cons of Alternative Loans

Strong problem solving skills allow you to choose the best loan product for your needs. Part of that process is looking at benefits and risks associated with each.

2a. Fewer Protections for the Consumer

The world of alternative lending is not highly regulated.

The good news is that protections are in place for military service members and their dependents.

Alternative financial service providers seek to provide a high level of social interaction and inclusion for their clients, making customers feel more welcome compared with mainstream institutions. In addition, alternative lenders are quick to point out that fees, such as overdraft charges on checking accounts, late fees on credit card payments, and overdraft expenses on debit and ATM cards, may be higher at a bank than what it costs to borrow a similar amount of money from a payday lender. In general, however, the best approach is to rely on low-cost borrowing options from mainstream financial service providers if possible. Some of these low-cost borrowing options, many of which we’ll discuss in later topics, are shown in the following table.

* The finance charge assumes the entire $300 balance is carried for 3 months then paid in full. If monthly payments are made, the finance charges will be less.
** A subsidized loan means the federal government pays interest on the loan while the student is enrolled in school.

3. How to Avoid Expensive Loans

Many Americans fail to set money aside for emergencies. This creates tremendous vulnerabilities for themselves and their families. Ask yourself this: Would you be able to come up with the money if faced with a $2,000 unexpected expense in the next month?

You may need to be agile and adjust your monthly spending to make sure you have an emergency fund with at least $2,000.

When asked this question in a survey, approximately half of all American consumers said that they could probably not or certainly not be able to come up with $2,000 in an emergency. Although $2,000 is a significant amount of money, it does not require too much imagination to identify possible things that could go wrong to create a bill for this amount. How long would it take to save $2,000 in an emergency fund?

hint
For the price of a daily soda and candy bar, you could accumulate a nice emergency fund in just a few years.

summary
In this lesson, you learned the pros and cons of alternative loans. Some people turn to these high-cost consumer loans during financial emergencies. However, obtaining loans such as payday loans, title loans, and borrowing from pawn shops is often not a good idea. These systems offer fewer protections for the consumer and can result in outrageous interest rates and exorbitant fees. (See for yourself by calculating the APR for these loans.) Strong problem solving skills can help you determine if one is right for you.

For the best low-cost alternative loan options, look to more mainstream financial sources, such as parents and family, banks, and low-interest credit card options. You can also avoid expensive loans by investing in your own emergency fund. Find ways to be agile and build your emergency fund each month by raising your income and lowering your expenses.

A short-term loan designed to be repaid within a few weeks when the borrower receives a paycheck.