Or
Close Popup
+
2 Tutorials that teach Contractionary Policy
Take your pick:
Previous Next

(more)
See More
Tutorial
what's covered
This tutorial will cover contractionary policy, focusing on fiscal policy and the contractionary tools available to use when the economy is experiencing inflation.

As a reminder, there are two tools of fiscal policy:

Fiscal policy focuses on the policies in these two areas. The idea is that the government can use these two tools to stabilize our economy's movement through business cycles.


So, we know that the government spends a lot of money in many areas, to name a few:

If the government wants to stimulate the economy, it can spend more money in order to create jobs and give people more money to spend.

This tutorial, however, is going to focus on what the government does when they want to contract the economy.

Let's begin by reviewing the equation for calculating GDP using the expenditure approach. Remember that Y is our economic activity or GDP, comprised of the following components:

Now, in expansionary policy, the hope is that if the government increases spending, this will, in turn, encourage greater consumer spending and business investment.

Unfortunately, if they end up increasing taxes in order to pay for that increased government spending, it will be counterproductive.

think about it
If the government creates more programs and tries to give you more money to spend, but at the same time they increase your taxes, now they are taking that money away from you. Hence, it is completely counterproductive.

So, without increasing taxes, what does our government have to do? Well, they have to borrow money, and the way our government borrows money is by selling Treasury securities to finance the increased government spending needed to stimulate the economy.

Essentially, the government takes on debt. Keep in mind, though, that when they repay the debt, tax revenue will be needed, which we will cover next.


Taxation is the second tool of fiscal policy. Federal, state, and local governments all collect taxes from citizens in order to fund programs.

Another way to stimulate the economy, which would be expansionary policy, is to cut taxes, to give people more money to spend.

So, by either increasing government spending or cutting taxes, the government is attempting to get people to spend money by injecting money into the economy.

However, this tutorial is focused on contractionary policy, so let's dive in.

Now, contractionary policy is either monetary or fiscal policy that is enacted to slow economic growth as measured by the GDP growth rate. Here, we are focusing solely on fiscal policy, not monetary policy.

Now, contractionary policy would do the opposite of what we discussed in the beginning, with expansionary policy.

By either decreasing government spending or raising taxes, the government is then attempting to slow down the economy by getting people to spend less money. Basically, instead of injecting money into the economy, they are now taking money out.

So, contractionary fiscal policy is when tax revenue is greater than government expenditures.


As with expansionary policy, if the government decreases spending or raises taxes (G, in our expenditure formula), this could have a multiplied effect by discouraging consumer spending and business investment (C & I).

big idea
For every $1 the government withdraws from the economy, this will result in GDP decreasing by more than $1, because of that multiplied effect.

We can find the potential multiplied effect by calculating a consumption multiplier, using the following formula:

Now, MPC is our consumers' marginal propensity to consume. It is the percentage of additional income that is being spent in the economy versus saved.

try it
Suppose the government wants to decrease GDP by cutting $10 billion in government spending, and we know that the MPC is .75. What overall effect will this have on the economy? Will it only withdraw $10 billion, or more?

Let's start by calculating our consumption multiplier, using our MPC of 0.75.

So, why does the government engage in a contractionary policy? Well, they really only do it when there is a major inflationary risk. It is the only way to cool down the economy and slow down the rate of inflation to reduce economic activity.

This will naturally cause an increase in unemployment, which is never the goal, necessarily, but it is the only way to go about taking away this inflationary risk. 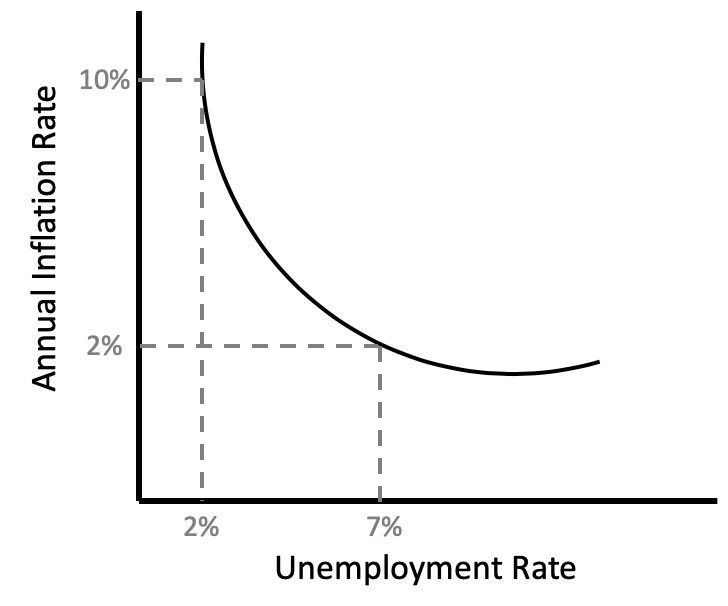 The idea is that when we have very low unemployment, like 2% on the curve above, which is far below our full employment rate of about 5%, this corresponds with a very high inflation rate of 10%.

When we have very low inflation, this will increase the unemployment rate.

Now, in the curve above, if inflation is very high at 10%, for example, the government could spend less money or raise taxes, as we discussed with contractionary policy.

If we move along the curve from 10% to a more acceptable inflation rate, like 2%--which is typically the annual goal--we could definitely that goal.

However, the trade-off is a higher unemployment rate at 7%, which is over our natural rate of unemployment of 5%.

The reason this happened is that overall demand in the economy fell as the government took money out of the economy. Therefore, you can see what happens when the Fed engages in these contractionary policies.

When the economy is experiencing extremely low unemployment, like this 2% example, inflation is rather high. So, in this case, the Fed can reduce inflation and bring unemployment to its natural rate of around 5%. Now, the numbers in this example are extremes, but it is entirely possible that the government could bring this inflation rate down to result in a 5% unemployment rate.

Critics of this model sometimes point to the 1970s, when our economy experienced very high rates of inflation at the same time as high unemployment. This is known as stagflation.

We would not be able to explain this with the simplified model above, because there were times in the 1970s when inflation was well over 10% coupled with an unemployment rate over 8%.

This would place us on a point well outside of the curve. We can't simply move along this simplified Phillips curve and find that combination of unemployment and inflation. 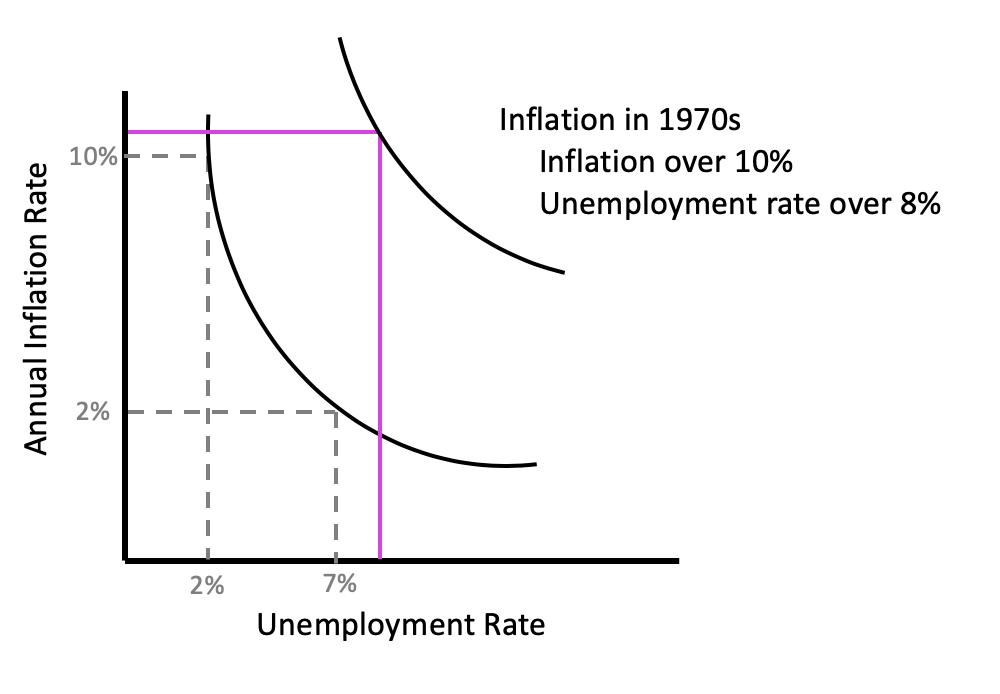 Therefore, we would actually need to suggest that this Phillips curve could move over time, resulting in a much higher Phillips curve on this example graph.

Now, here is an interesting Phillips curve that plots all of the different combinations of unemployment and inflation rates that our economy experienced between 2000 and 2013. 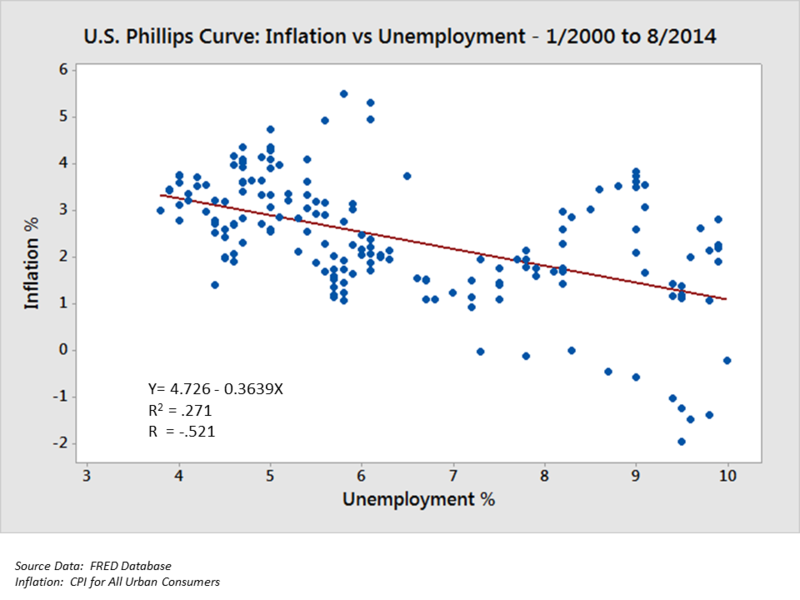 As you can see, the general relationship does exist between inflation and unemployment, but at different levels. So, the Phillips curve could be at different points.

summary
Today we learned that the tools of fiscal policy are government spending and taxation. During inflation, the government can implement contractionary policy, decreasing spending and/or increasing taxes. In either case, contractionary policy can have a multiplier effect. Lastly, we learned that a Phillips curve shows the relationship between unemployment and inflation.