Or
Close Popup
+
2 Tutorials that teach Correlations in Research
Take your pick:
Previous Next

(more)
See More
Tutorial
what's covered
This tutorial will cover the topic of correlation in psychological research. Our discussion breaks down as follows:

For example, researchers might study stress and yoga, and yoga's affect on reducing stress. Or, another example would be a correlational study on teens and their use of social media.

Essentially, a correlation study takes different factors and tries to examine the relationship between them. This is commonly used in media, as well as in psychology itself, so it's an important concept to know.

Now, a correlation in the correlational study refers to how closely related different events, behaviors, or variables are to each other. Remember, a variable is anything that can be changed and can be measured, that can have an affect on research.

For example, variables that we might study in an experiment are the amount of sleep, age, or test scores.

How closely related different events, behaviors, or variables are to each other

There are two different factors that need to be determined when evaluating correlation: the strength of the correlation, and the direction.

First, the strength of a correlation means how strong the relationship is between the two factors. In other words, how closely related are they to each other? This can be represented in two different ways.

Visually, we can represent the strength of a correlation by plotting out the relationships on a graph, looking to see how close the information is to forming a line of some sort.

The more scattered, or spread out, the data is, the more likely it is that there is no relationship between the variables, as shown in the graph below. This illustrates weak correlation. 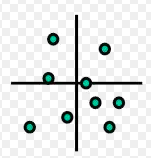 On the other hand, in the graph below, you can see how close the dots are to forming a line. This indicates a very strong relationship between the variables, so chances are there is correlation between the two.

Besides strength, it is also important to note the direction of the relationship between the two variables.

There can be a positive relationship, or a positive correlation, which is when one factor increases, the other one also increases, as illustrated in the graph below.

If, for example, when somebody gets more sleep--when the amount of sleep goes up--their test scores also go up. In this case, there is a positive correlation between sleep and test scores.

On the other hand, there might be a negative correlation. Now, this isn't "negative" in that sense that it is bad in any way; it's simply a different kind of relationship. A negative correlation shows that when one variable goes up, the other one decreases, as illustrated in the graph below.

If, for example, research shows that when somebody gets older, the amount of sleep that they need gets smaller, this would demonstrate a negative correlation between the two variables of age and sleep. Meaning, when somebody is very young, they need lots of sleep, and when they are older, they might need less sleep.

A relationship where when one factor increases, so does the other

A relationship where when one factor increases, the other decreases

It's important to realize, when discussing correlation, that correlation does not equal causation. Simply because you find a relationship between two different factors, doesn't mean that one causes the other one to happen. There might be an entirely different factor involved. There may be some causation going on, but not necessarily between the two correlated variables.

Lastly, we learned that correlation does not equal causation, which is a relationship where one factor leads to and causes another factor to occur.

Source: THIS WORK IS ADAPTED FROM SOPHIA AUTHOR ERICK TAGGART.

How closely related different events, behaviors, or variables are to each other

A relationship where when one factor increases, the other decreases

A relationship where when one factor increases, so does the other