Cosmology and the First Philosophers

Recognize the major ideas of some of the first philosophers.

Tutorial
what's covered
In this section, we will examine the very first western philosophers, the Pre-Socratics. After discussing why they are considered philosophers, we'll learn about some of the major figures and their ideas, and how those ideas shaped the world as we know it.

This tutorial examines Cosmology and the first philosophers in three parts:

1. Who Were the Pre-Socratic Philosophers?

A group of philosophers now known as the Pre-Socratics were active In Greece between (approximately) 600- 450 BCE.

The influence of the Pre-Socratics is limited because most of their work has not survived. What remains of their beliefs and teachings are fragmenta: mostly quotations from other philosophers whose works were preserved, and testamonia: references to them and their work (but not quotations) in other ancient texts. Our access to their work, therefore, is limited, but their work remains important. They influenced and inspired those whose ideas changed our science, culture and intellectual traditions. They were true philosophers, even though what we know about them and their work is limited to their major ideas.

They are categorized as Pre-Socratics, not only because of their limited influence, but also because much of their work can be assigned to natural philosophy or cosmology, branches of philosophy that have been largely relegated to the sciences.

The branch of philosophy that considers nature and the universe

The branch of philosophy that considers the universe in its totality

Natural philosophy has moved from being a branch of philosophy to an area that is studied in physics, astronomy, and other sciences. Cosmology is now a branch of astrophysics (cosmogony is a branch of cosmology that focuses on the origin of the universe). When we take this into account, we can see that the Pre-Socratics were practicing theoretical science when science was still part of philosophy.

Why then was their work once considered philosophy? To answer this question, recall that philosophy is the pursuit of truths that cannot be determined empirically. Questions like, “what are stars made of” could not be answered empirically 2,500 years ago. The theories, discoveries, and tools required to answer those questions had not been developed. All that the Pre-Socratics had to work with was their observations, and what they could conclude based on those observations.

Their methodology was philosophical in two ways: First, they used argument and reason to identify the best answers to the questions. Second, their methodology was naturalistic. They did not rely on divine mechanisms to support their answers. Also, they did not only work on these topics. Their findings in natural philosophy influenced their views in other areas of philosophical inquiry.

2. Some Pre-Socratic Philosophers and their Influential Ideas

Following is a list of some of the most influential Pre-Socratic philosophers, and their major ideas. The list is a sample; it is not comprehensive. Two significant Pre-Socratics, Heraclitus of Ephesus and Parmenides of Elea, have been omitted because they will be examined in detail in separate tutorials.

The Milesians
This group, usually considered to be the first Pre-Socratic philosophers, consisted of Thales and his pupils, Anaximander and Anaximenes. It was said that Thales claimed that everything in the cosmos was made of water, but Anaximenes held that everything was made of air. Anaximander maintained that the cosmos was initially apeiron (i.e., “boundless” or “without qualities”), but became differentiated.

If these theories seem far fetched, note that their methodology was sound. These philosophers used empirical data (i.e., information obtained by observation) to formulate theories of reality that best fit that data.

What these three theories have in common was the positing of a single cosmos: the claim that all matter was united according to a single arrangement/order, governed by universal laws. This was the Milesians’ true philosophico-scientific advancement. They were essentially correct in taking this position. Science worked out the details over the next 2,500 years.

Pythagoras
Pythagoras (long thought to be the discoverer of the Pythagorean Theorem) and his followers incorporated mathematics into his philosophical worldview.

make the connection
The Pythagorean Theorem, a basic component of algebra courses today, has been around for thousands of years!

To the Pythagoreans, the world was a mathematical entity of perfect harmony. They assigned great importance to certain numbers found in nature (e.g., the number of heavenly bodies). A human’s job was to find his or her proper place in this harmonious system. They also formulated and defended a reincarnation doctrine related to their worldview.

Xenophanes of Colophon
Xenophanes, a traveling poet, was also a philosopher who lived to a great age. Secularization played a major role in his philosophy. He reassigned divine mechanisms to naturalistic causes, such as the rainbow, which ancient Greeks believed to be a manifestation of the messenger goddess Iris. Xenophanes identified rainbows as phenomena produced as a result of meteorological causes.

Xenophanes maintained that it is better to rely on observation and reason than on signs from the gods. He was not an atheist, but objected to then-common conceptions of the gods, faulting earlier poets for depicting deities as treacherous and deceitful beings who constantly interfered in human affairs. He also opposed theories that relied on “the god of the gaps,” in which a miracle is used to support an otherwise-scientific explanation because there was no known natural cause. To Xenophanes, the gods controlled all things, but acted predictably, not miraculously. Indeed, science is close to impossible if gods constantly interfere with natural phenomena.

Xenophanes characterized this as anthropomorphism — the application of human attributes to something that is non-human (like the gods). In some ways, the Greek gods were depicted as the worst of humans. Zeus used his powers to change his form and rape women. Hera, his wife, punished those women. The gods sometimes helped the strong to defeat the weak, and the unreasonable to kill the reasonable. As depicted, the gods often behaved in ways that humans might behave if they had divine power. In these depictions, therefore, humans projected their attributes onto the gods. As Heraclitus stated: 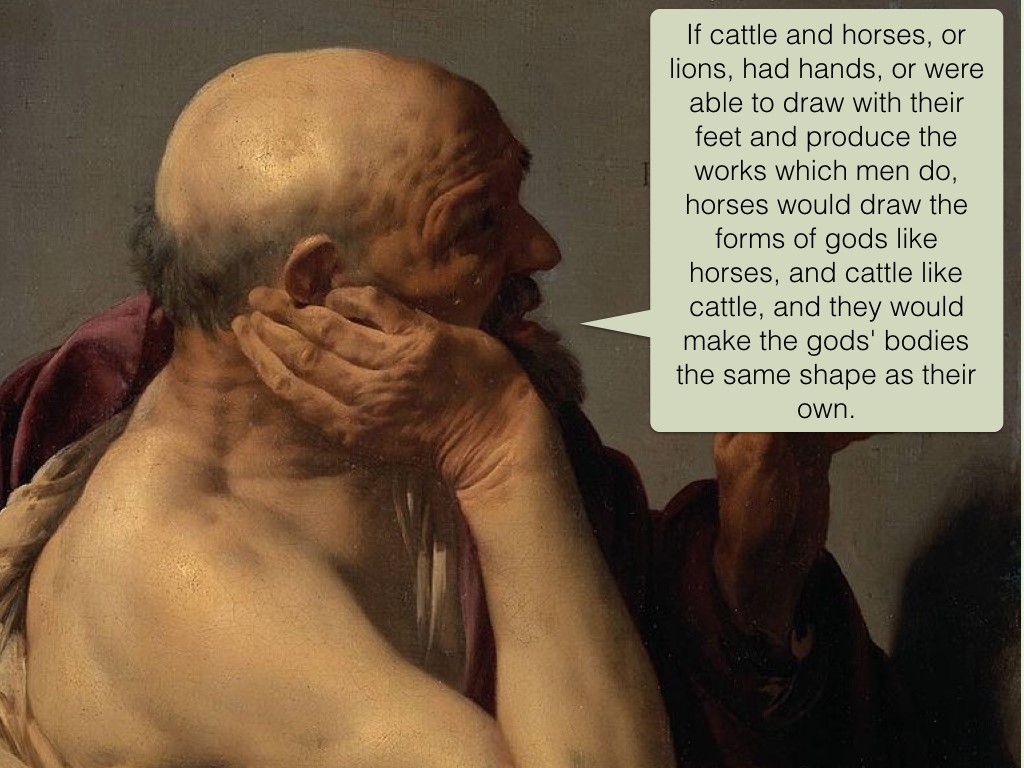 Any gods worth their titles would be the authors of the laws of nature. Their actions in the world would take place through nature, not above and beyond it.

Anaxagoras of Clazomenae
Anaxagoras was primarily interested in cosmology. Denying that celestial bodies were gods, he interpreted the world around him in natural terms, and formulated one of the first cosmogonies. Before there was a known universe, he theorized that everything began as an undistinguished mixture that took form and definition when a force called nous began to spin the mixture. The literal translation of nous is “mind,” but ancient Greek had such a small vocabulary that a word was often used for several things. As a result, it is not clear whether Anaxagoras defined nous as a deity or as a force of order (like the laws of nature). Either way, nous is the force which gives form to the universe, a process which Anaxagoras believed to be ongoing. He was condemned in Athens for maintaining this naturalistic concept.

Empedocles of Acragas
Empedocles was a physicist who was deeply religious. He was probably a Pythagorean. As a physicist, Empedocles maintained that there were four “roots” — what Aristotle would later call the elements — earth, air, fire, and water. These were combined by love, and separated by strife. In this system, there were six metaphysical entities that formed everything in the cosmos. Instead of coming into existence and passing away, Empedocles viewed the universe in terms of mixing and separating. (He thought this process also occurred on the physical level, involving the flow of blood.) He was concerned with religious purity and purification, and defended the Pythagorean notion of reincarnation.

Protagoras of Adera
Protagoras was a member of the “Older Sophists,” a group of traveling intellectuals. He made two significant intellectual contributions, which are interrelated. Protagoras was perhaps the first outspoken agnostic. He argued that we could not know whether the gods existed or not. This led him to make a second claim: “man is the measure of all things.” This statement is usually interpreted to mean that knowledge is relative to the knower. This implies that we cannot escape our biased perspective. We cannot know what it is like to walk in another person’s shoes.

3. Intellectual Legacy of the Pre-Socratics

It might be tempting to dismiss some of the ideas of the Pre-Socratics as quaint and outdated, but they mark the beginning of science. By observing the natural world and using reason to explain phenomena, the Pre-Socratics' provided a basis for all subsequent advances in the sciences.

Notice that there are common themes shared by the Pre-Socratic philosophers. The first is a consistent worldview, in which one or a few laws and elements are used to account for a variety of phenomena. The second is methodological naturalism. Most Pre-Socratics did not deny the existence of the gods, but maintained that we should not invoke them to explain phenomena. This (as a method, not with respect to belief) has enabled scientific progress from their time until the present day.

The Pre-Socratics viewed natural philosophy and theology as separate disciplines, with different standards of knowledge, and different applications. Their commitment to natural philosophy enabled them to think in new ways. In a number of areas, it took science millennia to catch up with them (e.g., thought described as a result of physical processes; Anaximander hinting that humans evolved from lower animals).

summary
The Pre-Socratics were the first Western philosophers. In this tutorial, we examined the contributions of some of the most influential philosophers in this group. The Pre-Socratics took a philosophical approach to questions that are now of interest to the sciences. Their ideas were a starting point for philosophic and scientific investigation.
Attributions
Terms to Know

The branch of philosophy that treats nature and the universe