Or
Close Popup
+
2 Tutorials that teach Cost: Total, Marginal and Average
Take your pick:
Previous Next

Calculate the average cost and marginal cost for a given situation.

(more)
See More
Tutorial
what's covered
This tutorial will cover the different ways of looking at cost: total, marginal, and average. We will discuss the relationship between these curves and how businesses use these costs to make production decisions.

As a reminder, the point of owning a business is to make a profit, and profit equals revenues minus costs.

In this tutorial, we will focus on the cost piece of this equation.

Total cost is variable costs plus fixed costs--essentially, all of our costs.

Here is a chart that reflects the various costs at different production levels.

Notice that fixed costs are the same regardless of how much is being produced. Even when we produce nothing, we still have a fixed cost.

A good example of a fixed cost is rent. Even if you produce nothing, you still have to pay your rent.

Variable costs, on the other hand, vary with production; they rise as we produce more.

If we just add fixed costs and variable costs together, we arrive at total cost.

Another way to calculate average total cost is to take average fixed cost plus average variable cost, since fixed plus variable equals total.

In the chart below, since we are talking about average total cost, we simply took the total cost and divided by the quantity each time.

So, what does this tell us? Well, for example, if we are producing five units, this tells us that on average each one of those five is costing us $37 per unit.

Notice that it changes depending on how much we are producing. The average total cost (ATC) falls at first, then eventually rises, which is fairly typical.

Anything better than that equals profit.

Average total cost is going to help firms with long run decisions because, obviously, firms want to make a profit.

Instead, the question becomes whether or not they can at least cover their average variable cost per unit.

If their price is over and above their average variable cost, then a firm should probably consider continuing to produce in the short run, even if it's not at a profit, because they can put some of those expenses towards their overhead, like rent.

This is why the supply curve is our marginal cost curve from above the point where price is over and above our AVC.

If price can't cover our variable expenses, then this means we are paying more for our workers to come in and our raw materials and we are not able to cover those things.

Therefore, a firm should contemplate shutting down at the point where price dips below average variable cost.

In this chart, our change in quantity is just one each time, so the marginal cost is simply the change in total cost.

Notice how marginal costs change over the course of production levels. The decrease at first, then begin to increase.

Generally, the assumption is that an industry has decreasing costs along some part of its production capacity.

What do these changing marginal costs tell us?

Well, in increasing cost industries, the average total cost increases with an increase in production. Marginal costs will also increase.

In a decreasing cost industry, the average total cost decreases with an increase in production. As firms produce more, they can spread out some of their upfront costs and their average costs will begin to fall, known as economies of scale. Marginal costs will also decrease.

Lastly, there are constant cost industries, where marginal costs would remain the same regardless of production level.

Here is a visual representation of the relationship between marginal cost and average cost. 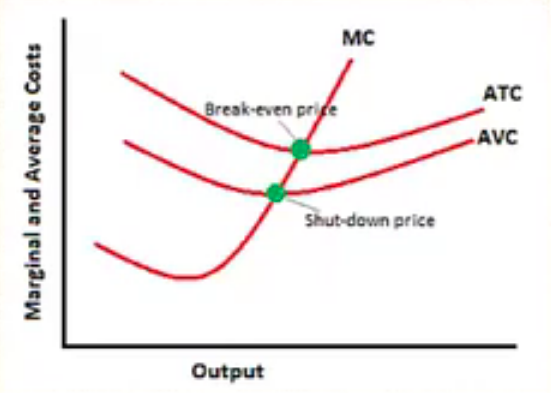 Keep the following in mind as you review the graph:

Notice the relationship between the marginal curve and both average curves.

Where the marginal lies below the average, it pulls the average down.

{[hint]| Here is a sports analogy to explain this relationship. Suppose a quarterback is averaging two touchdown passes per game. If they have a bad game and their next game-- their marginal or additional game--is even worse, it will pull his average down.}}

hint
Again, suppose the quarterback throws five touchdown passes in his next (marginal) game. This will pull his average up.

This is simply the law of averages.

big idea
The marginal cost must intersect an average at its minimum point.

4a. Break Even/Shut Down Points

When a firm is able to produce where price or demand equals average total cost, this is known as the break even point.

If price is greater than average total cost, then their generating price is more than covering all their costs, and they are profitable.

When a firm cannot cover its average variable costs, they should consider shutting down.

big idea
Therefore, a firm's short run supply curve is the marginal cost above the shut down point; they would only produce when price is above that point.