Tutorial
what's covered
In this lesson, you will learn what research writing is, and what the process generally entails. Specifically, this lesson will cover:

Research writing is writing that uses evidence (from journals, books, magazines, the Internet, experts, etc.) to persuade or inform an audience about a particular point.

Research writing exists in a variety of different forms.

Academics, journalists, or other researchers might write articles for journals or magazines; other scholars might create web pages that both use research to make some sort of point and that show readers how to find more research on a particular topic. All of these types of writing projects can be done by a single writer who seeks advice from others, or by a number of writers who collaborate on the project.

1. Thesis statement: Academic research projects are organized around a thesis, or controlling idea, that members of the intended audience would not accept as common sense. What an audience accepts as common sense depends a great deal on the audience, which is one of the many reasons why what "counts” as academic research varies from field to field. But in general, audiences want to learn something new about a topic.

Writing that uses evidence (from journals, books, magazines, the Internet, experts, etc.) to persuade or inform an audience about a particular point.

The controlling idea of a piece of writing, expressed in a single sentence.

Facts and details that support an argument.

An indication that words, ideas, or facts came from another source.

No essay or book simply “appeared” one day from the writer’s brain; rather, all writing projects come together after the writer, with the help of others, works through the process of writing.

An added component in the writing process of research projects is, obviously, research. Rarely does research begin before some initial writing (even if it is nothing more than brainstorming or pre-writing exercises) takes place, and research is usually not fully completed until the entire writing project is completed.

Instead, research comes into play at all parts of the process, and can have a profound effect on the other stages.

Chances are you will need to do at least some simple research to develop an idea to write about in the first place. You might do the bulk of your research as you write your rough draft, though you will almost certainly have to do more research based on the revisions that you decide to make to your project.

There are two other things to think about in relation to a writing process that includes research:

First, writing always takes place for some reason or purpose and within some context that potentially changes the way you approach the process.

The process that you will go through in writing for this class will be different from the process you would go through in responding to an essay question on a Sociology midterm, or in sending an email to a friend. This is true in part because your purposes for writing these various types of texts are simply different.

Second, the process of writing isn’t quite as linear and straightforward as it might seem. Writers generally start by coming up with an idea, but often go back to that original idea and make changes to it after they write several drafts, do research, talk with others, and so on. 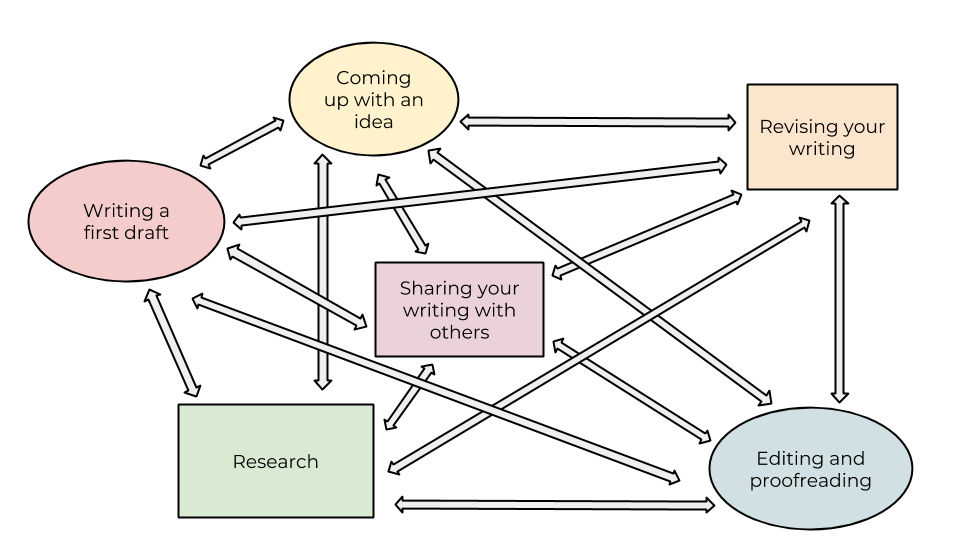 Instead of thinking of the writing process as an ordered list, you should think of it more as a “web” where different points can and do connect with each other in many ways, and as a process that changes according to the demands of each writing project.

big idea
While writers do follow the steps in the writing process in order (from coming up with an idea all the way to proofreading) for some projects, they also find themselves following the writing process out of order for other projects. That’s okay. The key thing to remember about the writing process is that it is made up of many different steps, and writers are rarely successful if they “just write” without following some sort of plan.

summary
In this lesson, you learned that the qualities of academic research writing include a thesis that expresses the main idea of the essay, evidence that uses researched facts and details to support the thesis, and citations that tell the reader where those facts came from. You also learned that the process of research writing is not always linear; in fact, the order of the steps you take in this process will depend on the purpose and context of your particular project.

Source: This content has been adapted from Lumen Learning's "Academic Research Writing: What is it?" tutorial.

An indication that words, ideas, or facts came from another source.

Facts and details that support an argument.

Writing that uses evidence (from journals, books, magazines, the Internet, experts, etc.) to persuade or inform an audience about a particular point.

The controlling idea of a piece of writing, expressed in a single sentence.