Identify the direction and strength of a scatterplot.

Tutorial
what's covered
In this tutorial, you're going to learn about describing scatterplots. Our discussion breaks down as follows:

When talking about univariate data, or one-variable data, you would discuss the shape, center, and spread of a distribution when making histograms and dot plots,

Instead, you're actually going to describe:

In the form, we look for a pattern. Is the pattern linear, or do the data show a curve? Do they start low, then peak, then end low? Or do they start low and end high? How do they curve or do they rise quickly and then tail off? There's a lot to look at.

When discussing form, you will most likely describe a scatterplot as linear or non-linear.

The overall shape of the data points. The form may be linear or nonlinear, or there may not be any form at all to the points if they form a "cloud."

The direction refers to how the y-axis variable responds as you move to the right on the x-axis variable. There are two main directions that a scatterplot can have are positive and negative.

The strength is how closely the two variables are associated with some line or curve. How well do the points follow that indicated form? How well do these points stack up on a line? The strength can be described as strong, moderate, or weak.

hint
The idea is, if you can encase the points in an oval, the stronger associations will have a longer, thinner oval.

The closeness of the points to the indicated form. Points that are strongly linear will all fall on or near a straight line.

try it
This is the 1970 and 1980 price of different seafood in cents per pound. How would you describe the form, direction, and strength of this scatterplot? 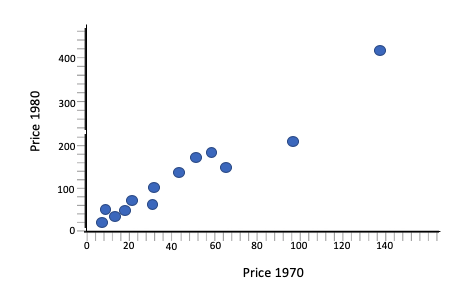 summary
To describe scatterplots that look at one variable data, we look at shape, center, and spread. When we look at two variable data scatterplots, we analyze form, direction, and strength. Regarding form, are they linear or nonlinear? Are there unusual features, gaps, clusters, or outliers? Regarding strength, how well do they follow that form? And lastly, we analyze the direction of the association: what happens as the x-axis variable increases? Does the y-axis variable go up, down, or does it stay the same? Or, is there really no association at all?

The overall shape of the data points. The form may be linear or nonlinear, or there may not be any form at all to the points, if they form a "cloud."

The closeness of the points to the indicated form. Points that are strongly linear will all fall on or near a straight line.