This lesson provides examples of regulatory intervention and market failure.

Tutorial
what's covered
This tutorial will cover the various causes of market failure and how government regulation attempts to address market failure.

Taking a step back, we know that in most cases, free markets function wonderfully, because producers have profit motive to provide consumers with what they want at prices they are willing to pay.

Therefore, generally speaking, unregulated, free markets with no government intervention produce the best outcome that will maximize overall welfare as a society.

When we allow the free market to function on its own, it allows for trade between buyers and sellers.

When the market reaches equilibrium, both consumers and producers are better off and there is no dead weight loss, as indicated by a welfare analysis that shows us how big consumer and producer surplus are.

However, sometimes a market fails to produce the efficient allocation of goods and services for various reasons, which is known as a market failure.

Markets generally fail when preferences are not aligned or in certain cases involving decision-making.

Information asymmetries refer to when information is not equally available to all parties; there is a lack of complete transparency.

This results in an advantage to those individuals having full information.

think about it
Have you ever regretted a purchase because you did not realize what you were getting? For example, have you ever known anyone who bought a car that was a "lemon", needing repairs time and time again? Had that person known this going into the purchase, he or she likely would not have spent any money on it, regardless of whether it was a good deal or not. There are also products that make grandiose promises and then we find out that it is simply not the case, and we overpaid for a product.

When we do not have full information about what we are buying, the market price that we paid does not fully reflect the true benefits and costs.

When information is not equally available to all parties; lack of complete transparency. This results in an advantage to those individuals having full information.

Non-competitive markets are markets where price setting, or the quantity supplied, occurs without interaction between suppliers and demanders.

There is a lack of competitive forces and the free market is not the basis for trading.

hint
When we discuss non-competitive markets, we are talking about the opposite end of the spectrum from perfect competition.

For example, public utility companies are generally natural monopolies and do not face any competition. They are complete price-makers and are able to choose what price they charge.

If you think about your electricity company, when the power goes out, are they going to restore power eventually? Absolutely. However, what incentive do they have to do this quickly?

They lack the incentives that competitive firms do to provide us with the best quality at prices we are willing to pay.

Markets where price setting (or quantity supplied) occurs without interaction between suppliers and demanders. Lack of competitive forces; free market is not the basis for trading.

Principal-agent problems refer to when a principal party cannot trust or motivate the agent party to conduct business that is not self-serving.

As companies grow into large corporations, sometimes they experience these principal-agent problems.

Have you ever questioned whether your doctor is recommending a certain medication or even surgery because it is best for you versus something that is generating income for him or for her? This would be an example of a serious principal-agent problem.

An externality is when the effects of a good or service go to a third party--someone who is not involved in that market or transaction. These can be either negative or positive.

Negative Externalities
Negative externalities are costs of a good or service to a third party, such as:

These things are not your fault, yet you are essentially paying the cost of them.

Here is a graph that illustrates the result of negative externalities.

You can see that the cost to the individual is much less than the cost to all of society, including you. 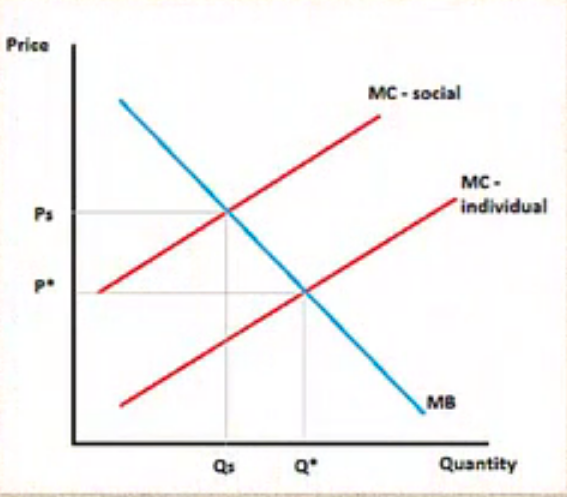 If the individual cost line represents the cost for one person to pollute, there is a much higher cost of that pollution that other people have to pay for, or have received the negative externality of it.

Because the full costs are not realized, you can see these tend to be overproduced, as shown at the intersection of Q* and P*.

In reality, the price should be higher and it should be produced less, at Q1 and P1.

Positive Externalities
In the case of positive externalities, we have the benefits going to a third party, as shown in the graph below.

Examples would include flu vaccines or environmental clean-up. 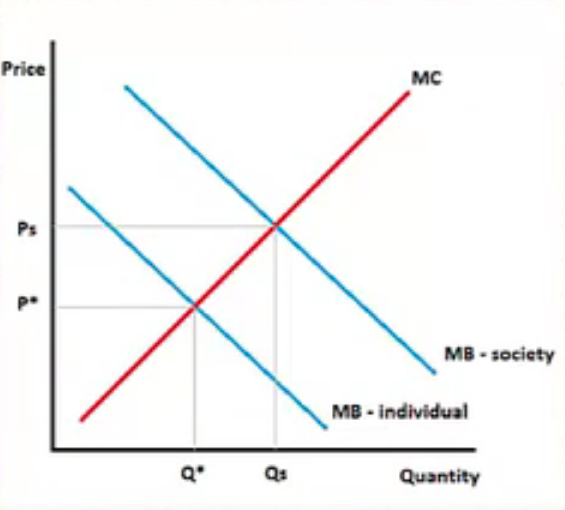 If you get a flu vaccine, that benefits you. However, doesn't everyone else around you also benefit from you getting that flu vaccine?

Even if someone else chooses not to get the flu vaccine, they cannot get the flu from you because you are vaccinated against it.

Therefore, the benefits are much higher than realized, so these tend to be underproduced. The price and quantity could be higher if, in fact, we realize the full benefits to society.

The effects of a good or service to a third party; can be negative or positive

A public good is a good that is considered both non-rivalrous and non-exclusive, which are the two criteria for public goods.

Let's explain it further through some examples.

National defense is something that everybody enjoys the benefit of, which makes it non-rival. We all enjoy it at the same time.

Public parks are another type of public good. Because there is no way to exclude free-riders from enjoying public goods, there is little incentive for private markets to provide them.

A good that is considered both non-rivalrous and non-exclusive

Often, government regulation is necessary or suggested to address some of these market failures.

Keep in mind that any regulation is going to take place through a political process, which is imperfect.

So, what is in society's best interest? These political processes, unfortunately, can sometimes lead to government failure, which is a situation involving government intervention that results in increased inefficiency in the allocation of goods and services.

Principal-Agent Problems
Here again we see principal-agent problems, where politicians and government bureaucrats seek to maximize their own utility.

think about it
If you think about the goal of a politician, it is quite short-term, to get reelected and please their constituents in any way that they can. Similarly, the goal of a bureaucrat might be to maximize the size of his or her budget. Therefore, their goals are often going to conflict with what is best for our country. Their goals can be self-serving and not necessarily in the best interests of the rest of us.

Moral Hazard
Moral hazard can happen when government programs, for example, to help struggling citizens and firms, sometimes take away important incentives in the free market.

Also, subsidizing producers can create disincentives for these firms to become more efficient and can prevent others from entering the market with the subsidies.

Information Failure
Information failures can also occur. How do businesses decide how much to produce, the quality of their product, and what price to charge?

They take signals from us, the buyers.

Does the government really know what type of jeans you want or what you are willing to pay for shoes?

Without the information available that is in private markets, the government cannot effectively determine the optimal quality and quantity of goods and services.

Therefore, the goal of any government regulation is to reduce market failures, but we need to understand that it may be worse than the market failure itself, unfortunately.

summary
Today we learned that market failure occurs whenever there is an inefficient allocation of goods or services. We also discussed the reasons why markets fail, due to information asymmetries, non-competitive markets, principal-agent problems, externalities, and public goods. We learned that government regulation attempts to address market failure, but can sometimes make the outcome even worse, and that government failure is often a result of principal-agent problems, moral hazard, and information failure.

The effects of a good or service to a third party; can be negative or positive.

A situation involving government intervention that results in increased inefficiency in the allocation of goods and services.

When information is not equally available to all parties; lack of complete transparency. This results in an advantage to those individuals having full information.

Markets where price setting (or quantity supplied) occurs without interaction between suppliers and demanders. Lack of competitive forces; free market is not the basis for trading.

When a principal party cannot trust or motivate the agent party to conduct business that is not self-serving.

A good that is considered both non-rivalrous and non-exclusive.