Understand the basics of the DNA molecule

The structure of DNA

Nucleotides are composed of three main parts:
a phosphate group.
a 5-carbon sugar (deoxyribose in DNA).
a nitrogen-containing base.
The only difference between each nucleotide is the identity of the base. There are only four possible bases that make up each DNA nucleotide: adenine (A), guanine (G), thymine (T), and cytosine (C).

The various sequences of the four nucleotide bases make up the genetic code of your cells. It may seem strange that there are only four letters in the “alphabet” of DNA. But since your chromosomes contain millions of nucleotides, there are many, many different combinations possible with those four letters.  A bonds with T and C bonds with G.

But how do all these pieces fit together? James Watson and Francis Crick won the Nobel Prize in 1962 for piecing together the structure of DNA. Together with the work of Rosalind Franklin and Maurice Wilkins, they determined that DNA is made of two strands of nucleotides formed into a double helix, or a two-stranded spiral, with the sugar and phosphate groups on the outside, and the paired bases connecting the two strands on the inside of the helix 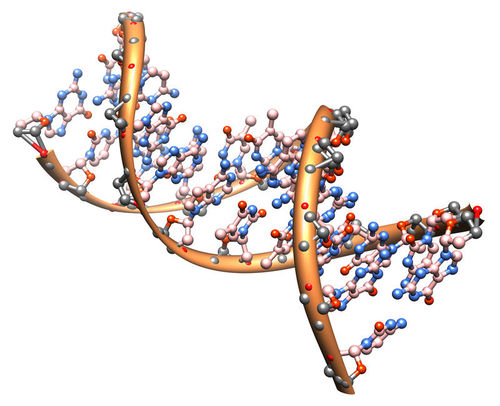 Things you may not know about DNA

Please watch the video about DNA.

Please click on the link for the DNA interactive model

Here are some games that can help you with DNA