Tutorial
what's covered
This tutorial will cover the topic of economic growth, or GDP.

After the Great Depression, economists realized that in order to avoid a similar economic downturn from happening again, they needed a better way to keep track of the U.S. economy.

It is usual for our economy to go through fluctuations of growth and contraction in the short run, but economists started asking themselves the following questions:

big idea
GDP attempts to measure all economic activity in a country in a year.

Gross Domestic Product; the sum of all final goods and services sold within a nation’s domestic borders; a measurement of economic activity

There are two approaches to calculating GDP: the income approach, which is also known as the resource cost approach, and the expenditure approach.

Now, both approaches are essentially two sides of the same coin, meaning they are both going to arrive at the same outcome, but by using different methods.


The first approach to discuss is the resource cost or income approach, which consists of adding up the number of resources used to produce goods and services, or the sum of the income received from the purchases of these resources.

This approach calculates economic activity by adding up the costs that go into producing goods and services.

hint
This is an activity in the input market from the Circular Flow Diagram.

You may recall that our resources or inputs are land, labor, and capital. Therefore, we want to look at the cost of these or the income received from them.

Think of this income using the acronym WRIP:

Now, this process may sound rather complicated, but we do have data on the income that people make from tax returns, which is readily available to our government.

Keep in mind, though, that not all income that people make equates to income for businesses.

For example, equipment depreciates or loses value from year to year, so we need to make adjustments for that type of thing.

We would include income that foreigners make here in our country because if they are working here, they are generating economic activity here.

On the other hand, income that Americans make abroad would be excluded because that income is contributing to somebody else's gross domestic product, not ours. 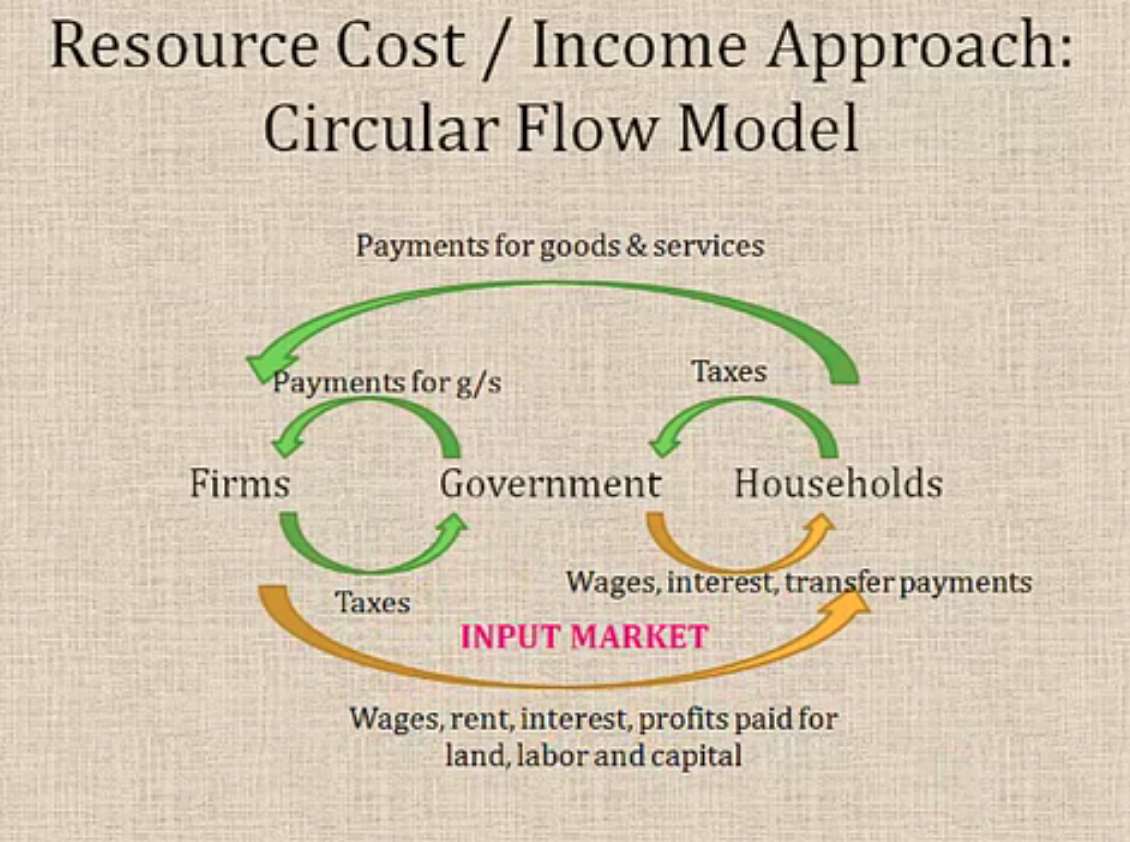 
On the contrary, we have the expenditure approach, which indicates what we spend money on. This is the sum of all final goods and services purchased in an economy, typically referenced as the following formula: 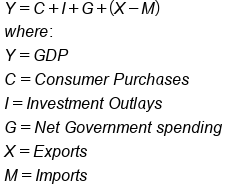 Again, this approach calculates economic activity by adding up what people spend money to purchase.

hint
This is an activity in the output market from the Circular Flow Diagram.

This approach reflects the top of the circular flow model here. As mentioned, we are subtracting what we are importing, or paying the rest of the world for, and adding our exports, because exports are items that we are producing here. 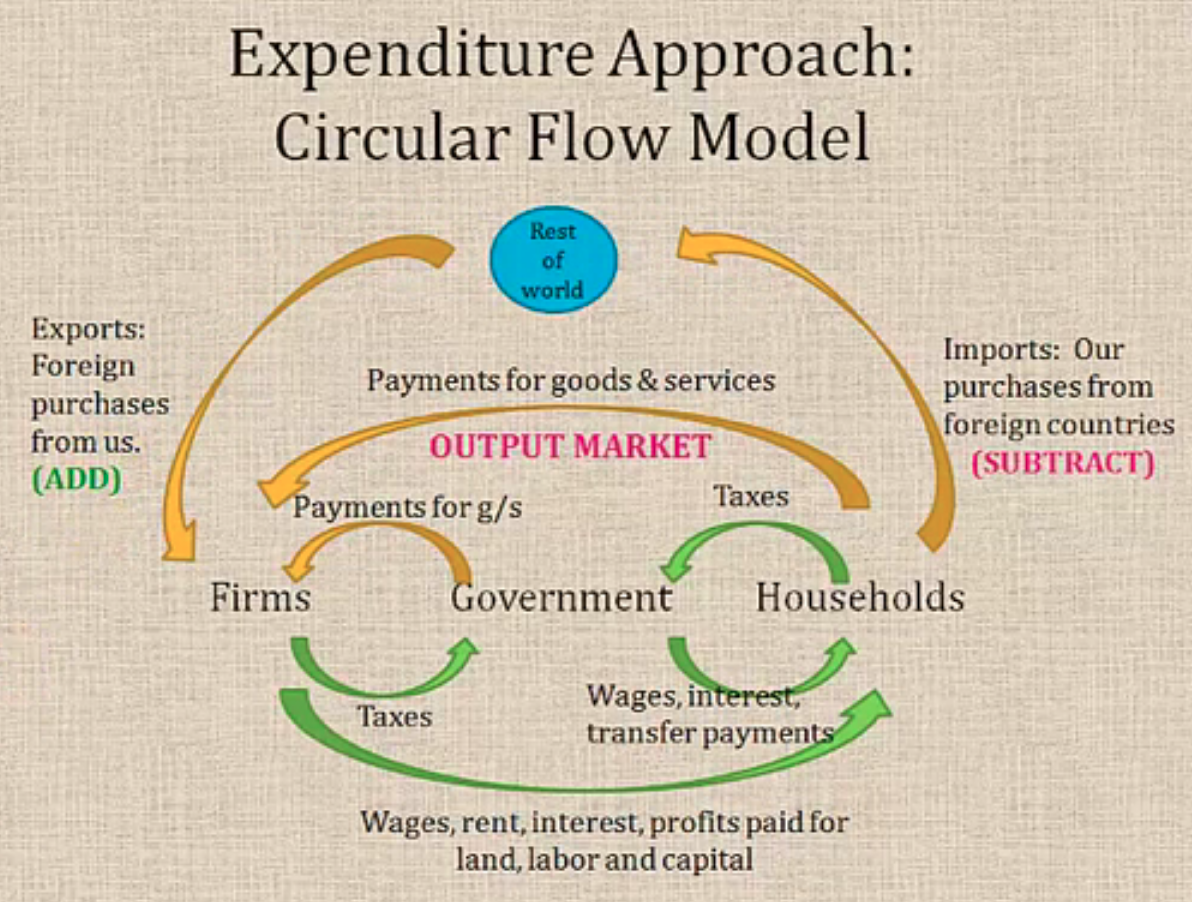 Now, solving for I, we get:

The reason we are doing this is that we want to look at savings for a minute, and investment is the same as savings in an economy.

Next, we add and subtract T, which represents taxes collected.

This means that savings equal these two terms added together:

It is simply another way to look at savings within the expenditure approach.

So, why is it that the expenditure and income approaches arrive at the same GDP? Well, it is because one person's spending becomes another person's income, which you can see on the Circular Flow Model. This is why the model is circular in nature: the money that people are spending in the top, they get by working in the bottom, or in the input market.

Sum of the amount of resources used to produce goods and services, or sum of the income received from purchases of these resources

3. Measures of Growth/Shortcomings of GDP

The whole point of calculating GDP is to show GDP growth, or how we measure the change in GDP over time. GDP is the most common way of measuring growth. If we are growing by GDP, that is an indication that our macro, or overall, economy is healthy.

big idea
GDP growth is a measure or indication of a "healthy" macroeconomy.

In the past, we have used a measure called gross national product (GNP), the only difference being that it calculates the value of goods and services produced by Americans instead of in America. Today, however, we mostly use GDP, being more concerned with what is being produced within our nation's borders.

So, could anything ever really be a perfect measure of all economic activity or how people live in a country? Not really, no. GDP cannot capture any non-market activities, like cleaning our own homes, caring for our children, or changing the oil on our car.

It is also not going to measure the value that we place on things, like leisure or safety. Crime and pollution cannot be accounted for, either.

Also, GDP is an average. Certainly, if GDP per capita (person) rises from one year to the next, we can say overall that our standard of living has improved. However, that certainly does not mean that everyone is better off.

The measure of change in GDP over time

Now, it is important to note, especially in the expenditure approach, that we only measure final goods and services, not intermediate ones. An intermediate good is something that is purchased in the production process to help us make a final good or service.

Do we count those tires in our GDP?

The answer is no because those tires count in the final purchase price of the vehicle. If we counted them when the manufacturer purchased them to put on the car and when you bought the car, that would be double counting. The tires are already counted in the final selling price of the vehicle, and we want only to count things that are being produced new.

However, if you need new tires for your car this winter, then the tires you purchase to replace your old ones will count in this year's GDP. Those new tires are being produced this year, and are being purchased as a new good or service.

Hopefully, this helps you to understand the difference between an intermediate good--something used in the production process to make a final good--and a final good.

summary
Today we learned about what GDP is and what it measures. We learned about the two approaches used in calculating GDP, the resource cost/income approach and expenditure approach, including the differences between the two. We discussed some of the shortcomings of GDP as a measure of growth and ended today's lesson by discussing how we need to be careful to only count final, vs. intermediate, goods and services.

Sum of all final goods and services purchased in an economy;

The measure of change in GDP over time.

Sum of the amount of resources used to produce goods and services, or sum of the income received from purchases of these resources.