Recognize an organism as either a producer, consumer, or decomposer.

Tutorial
what's covered
This tutorial will cover the topic of ecosystems ecology, which is the study of physical and biological structures and processes of living and nonliving components of an ecosystem. We will discuss ecosystem phenomena, as well as the flow of energy through ecosystems.

hint
In general, remember that ecosystems do not have clear boundaries, and their edges can change over time.

Ecosystem ecologists often study large-scale issues and phenomena that include:

The ecological pyramid below, also known as a trophic pyramid, illustrates the flow of energy in an ecosystem. 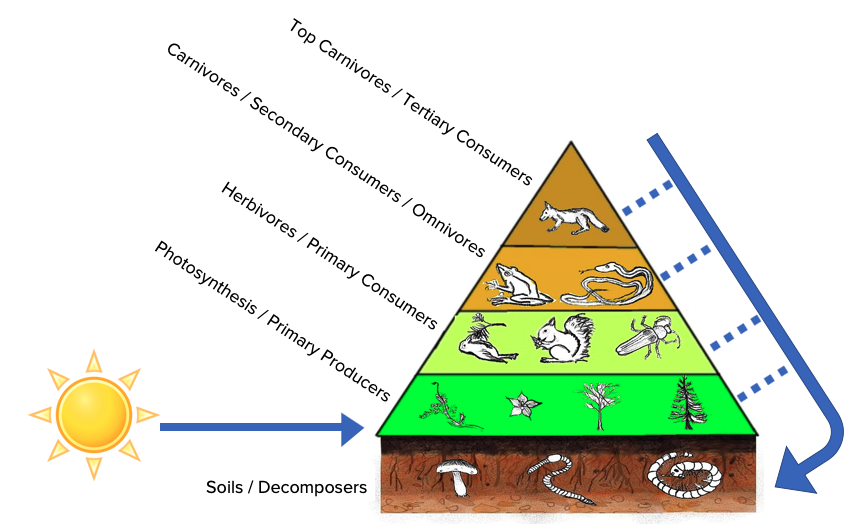 All energy in an ecosystem originates from sunlight, which is converted into sugars through photosynthesis by primary producers. These producers are also known as autotrophs because they produce their own food. Most plants and plankton are autotrophs.

Heterotrophs fill out the rest of the pyramid because they get their sustenance by consuming other organisms. The energy then flows upward in an ecosystem through various levels, from primary producer to primary consumer, such as a rabbit that eats vegetables. Next, secondary consumers, like a snake, eat an organism from the group below it. Finally, tertiary consumers, like an eagle or a hawk, eat an organism from the group below, completing the pyramid.

big idea
The energy is transferred as one level feeds on the one below it and metabolizes that energy.

Eventually, all energy ends up back at the bottom when organisms die. They are then broken down and consumed by the decomposer group. This group is filled with things like worms and mushrooms.

summary
Today we learned about ecosystem ecology, or the study of physical and biological structures and processes of living and nonliving components of an ecosystem. We discussed a variety of ecosystem phenomena, and explored the flow of energy through ecosystems.