Or
Close Popup
+
2 Tutorials that teach Elasticity
Take your pick:
Previous Next

Tutorial
what's covered
This tutorial will cover the topic of elasticity, focusing on the three types of elasticity: own-price, cross-price, and income.

Let's begin with a quick review of the laws of supply and demand:

In this tutorial, we will be discussing exactly how much more or less, and if it is the same for every good.

Elasticity is the measurement of the change in quantity demanded or supplied which indicates the sensitivity of one variable to characteristics of another variable or income.

In other words, how much do people respond--by buying or supplying more/less--when something else changes, like the price of the good itself, the price of a related good, or people's income?

The answer is that it really depends on the good or service:

Let's explore some examples to illustrate the different measurements of elasticity.


This is an extreme example of elasticity known as perfectly inelastic demand.

hint
Note, this example references demand because it is a bit easier to understand, but this could certainly apply to supply as well.

This reflects perfectly inelastic demand for a life-saving medicine. Notice that no matter what the price, this consumer is buying the exact same quantity--30 pills per month. Therefore, they are not responsive at all to a price change because a life-saving medicine is a necessity, and there are no substitutes. 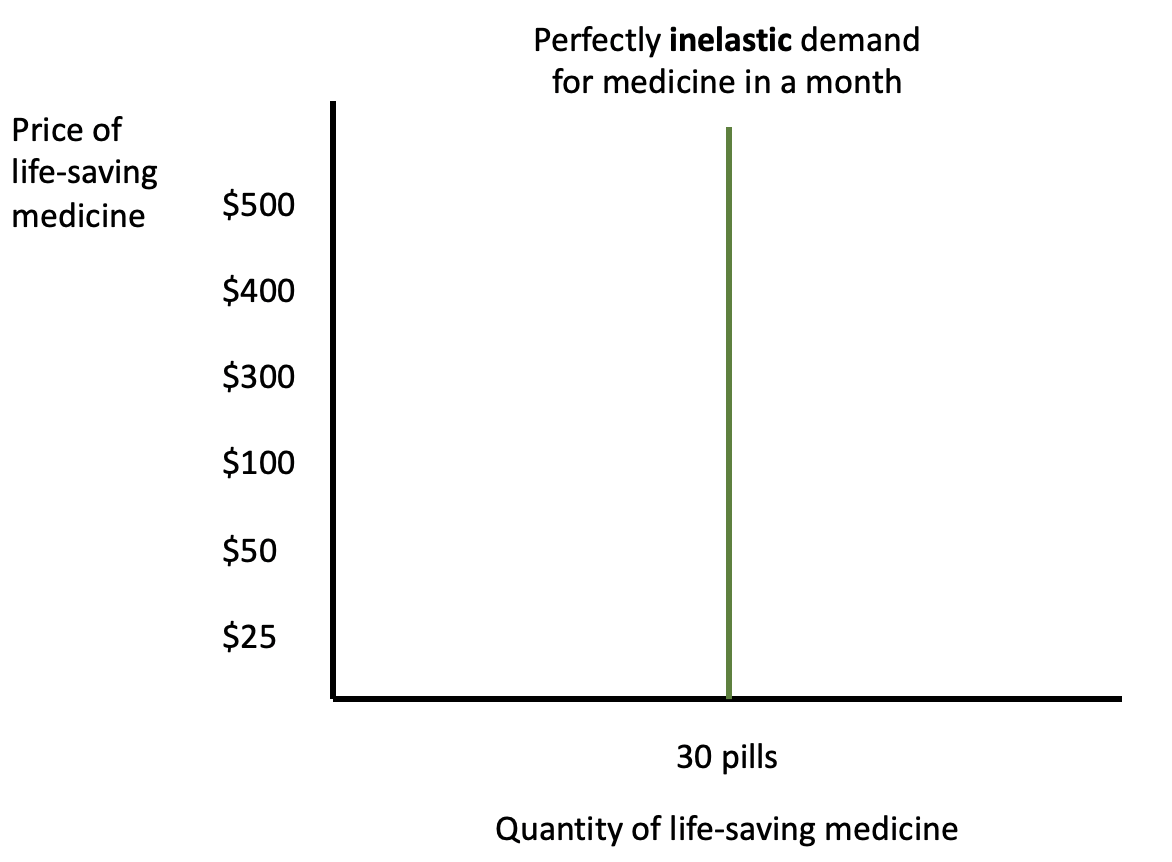 
Now, most things in the world are not perfectly inelastic, but there are items like gasoline that are relatively inelastic.

This is not straight up and down, or completely vertical, because people do change their behavior somewhat as the price of gasoline goes up. 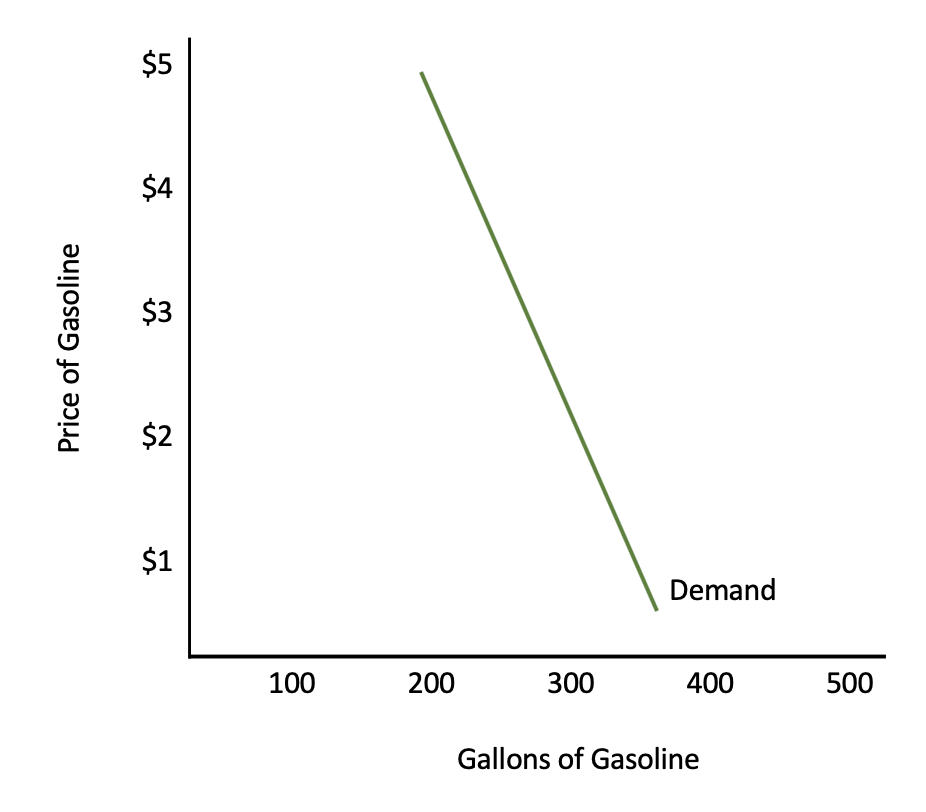 However, notice how the price can change significantly, yet consumers do not change their purchasing habits very much. This is because most people view gasoline--at least in the short term--as a necessity.

big idea
The more vertical the curve, the more inelastic the demand or the supply for something is.


Now we shift to the other end of the spectrum, which is perfectly elastic demand.

We will use the example of a hot dog stand that is one of 200 stands in a baseball stadium. They are all selling an identical product and are all charging $5 for that identical hot dog. 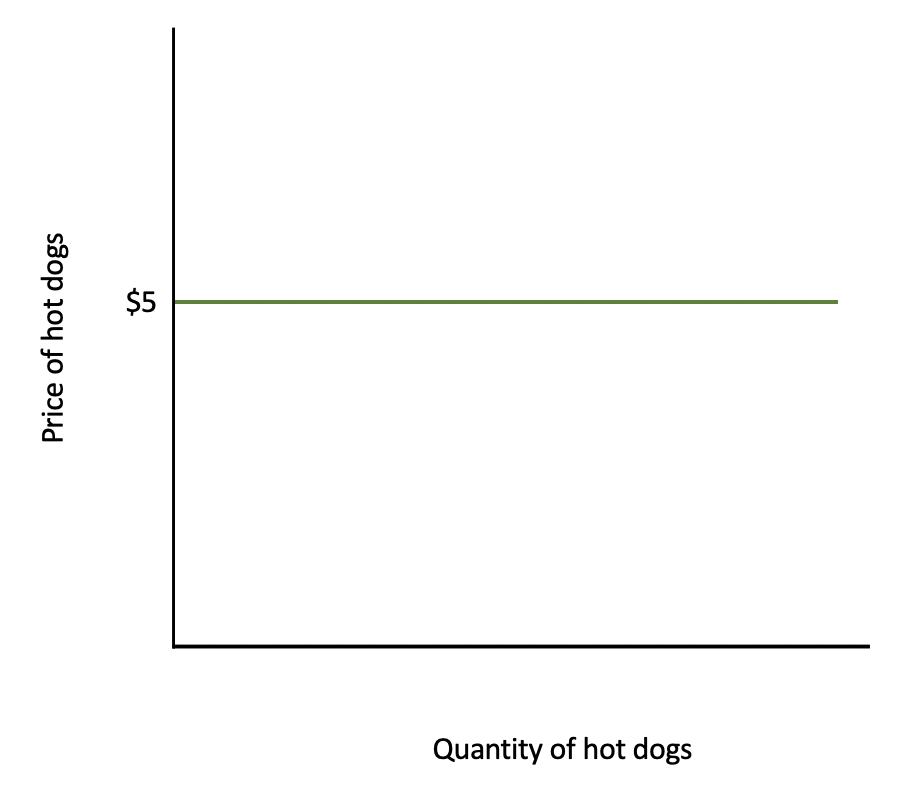 If one hot dog stand out of 200 decided to raise price up to $6, for instance, no one would purchase a hot dog there. The quantity demanded, in theory, according to this curve, would drop to zero, which is what a completely horizontal demand curve would imply--it is perfectly elastic.

hint
A visual way to remember the concept of perfectly elastic demand is if you place a line at the top of the graph, it looks like the letter "E," for elastic. 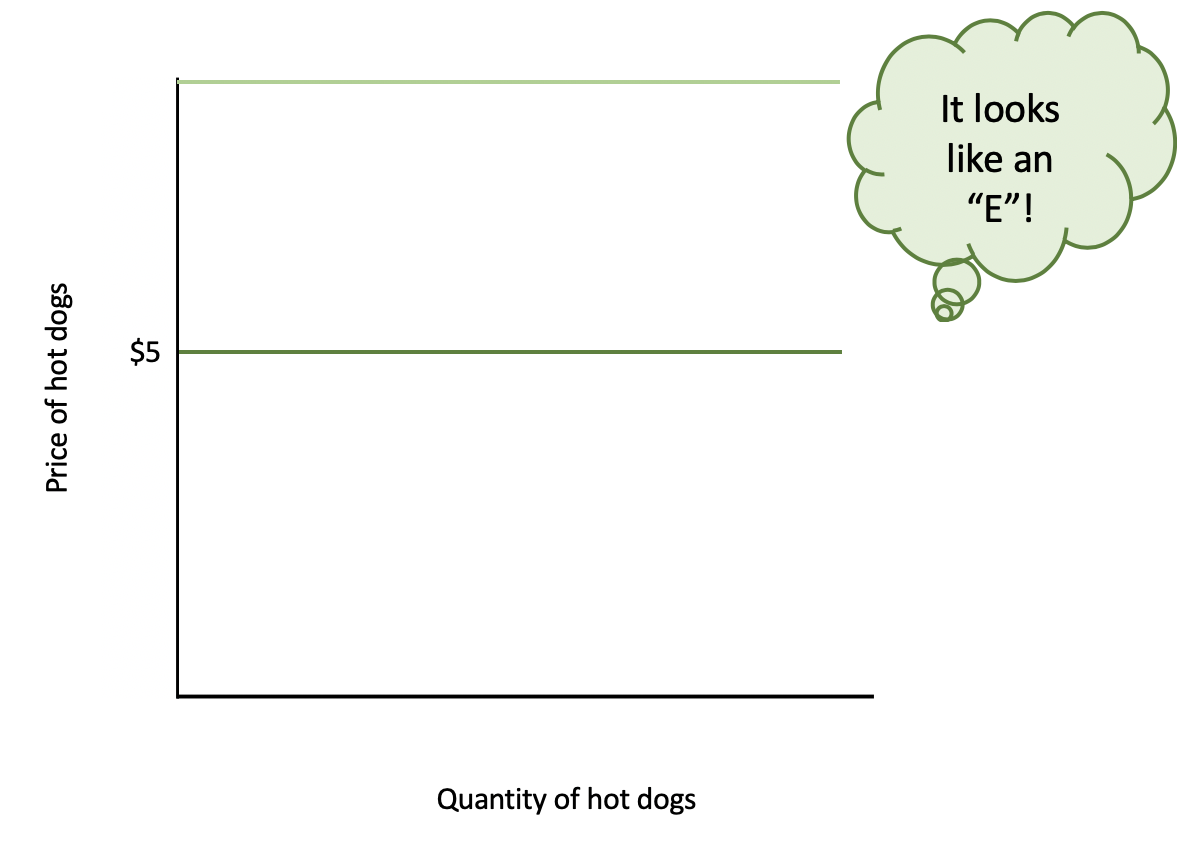 
However, not many things are perfectly elastic in the world, so here is an example of something that is relatively elastic, which would be the demand for a specific brand of something.

Demand for a specific type of apples, like Gala apples, would be somewhat elastic. 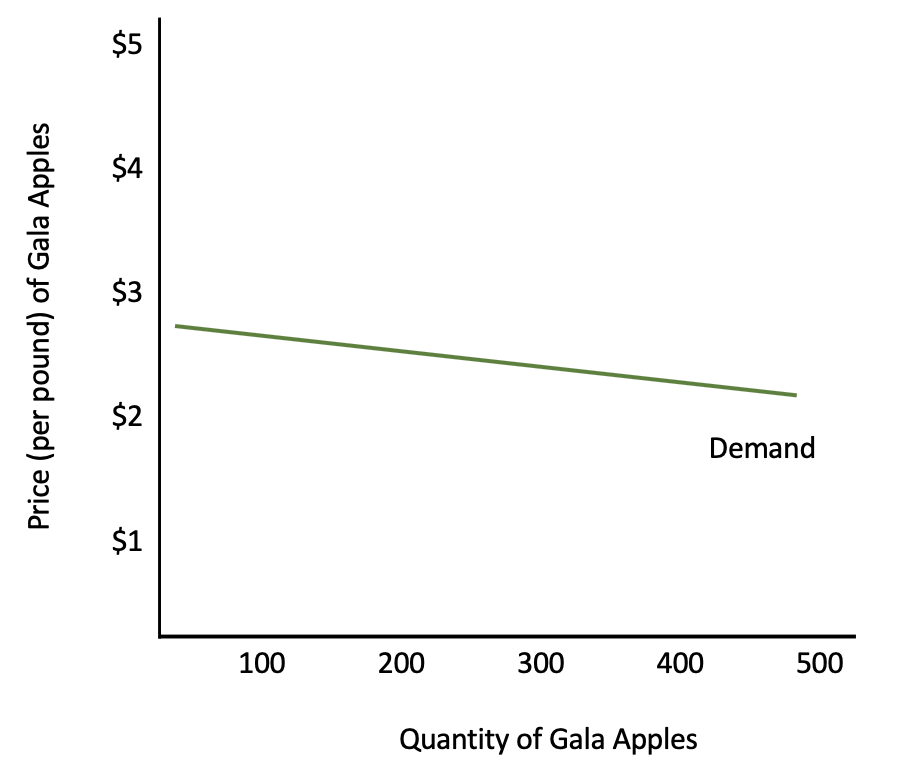 It is not completely horizontal, because prices could increase a bit and you would still see purchases of Gala apples by people who simply prefer them.

However, quite a few people would change their minds. Notice how quantity is changing significantly compared to price because there are so many substitutes for Gala apples.

big idea
The more horizontal the curve, the more elastic it is going to be.


Finally, we have unit elastic demand, illustrated by this example using demand for chicken. 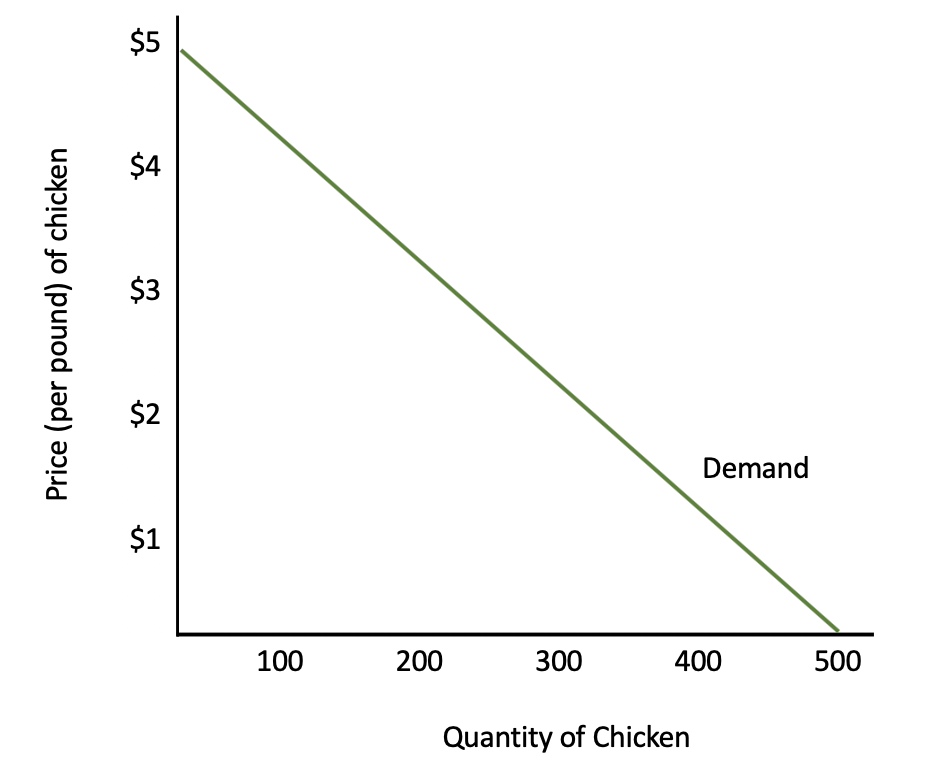 All of these examples involve own-price elasticity, which is elasticity of either demand or supply when the price of a good changes, keeping all other variables and goods separate.

Is bottled water at the zoo elastic or inelastic in demand? Suppose the zoo was selling bottled water for $2, and they were selling 500 bottles of water a day.

The zoo decides to raise prices to $4 per bottle of water, and now they are selling 400 bottles of water a day. 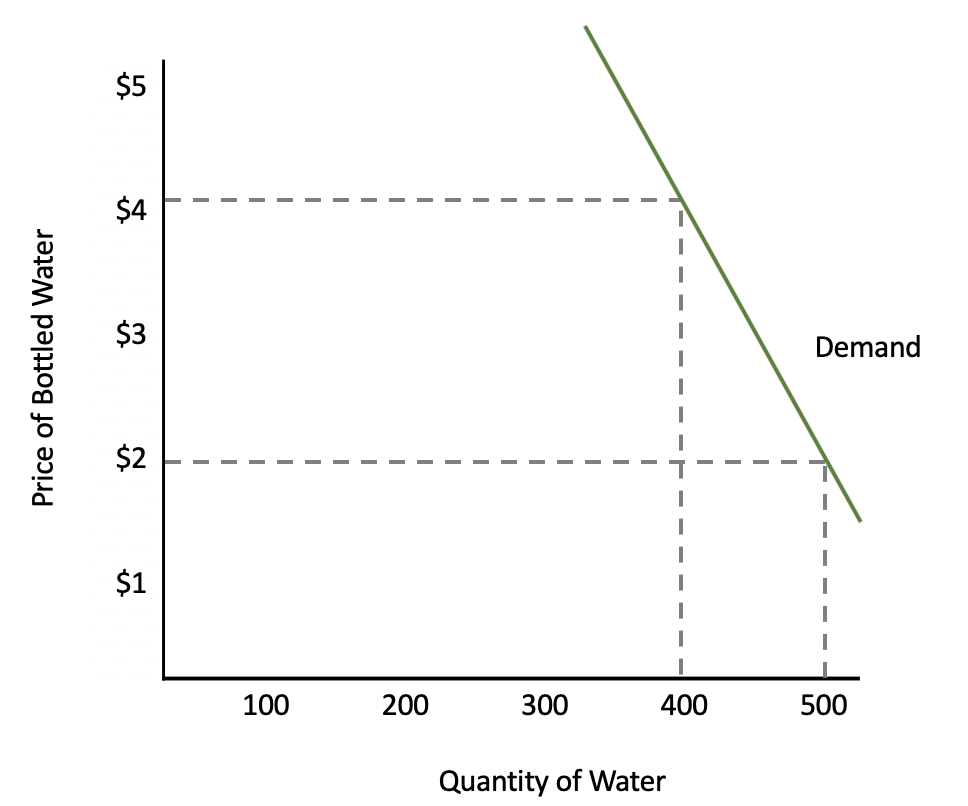 Our elasticity coefficient is 0.20, but what does this number mean?

Well, when we look at the elasticity coefficient for own-price elasticity, a coefficient greater than 1 indicates that demand would be elastic because that would suggest that the numerator responds more than the denominator. So, people change their buying habits by more than the percentage change in price.

Inelastic demand results in a coefficient less than 1 because people are not as responsive to the change in price.

Unit elastic is when the two change proportionately, with an elasticity coefficient equal to 1.

Elasticity of demand (supply) when the price of a good changes, keeping all other variables and goods separate

Now, cross-price elasticity is a change of demand or supply that occurs due to a change in the price of substitutes or complements. 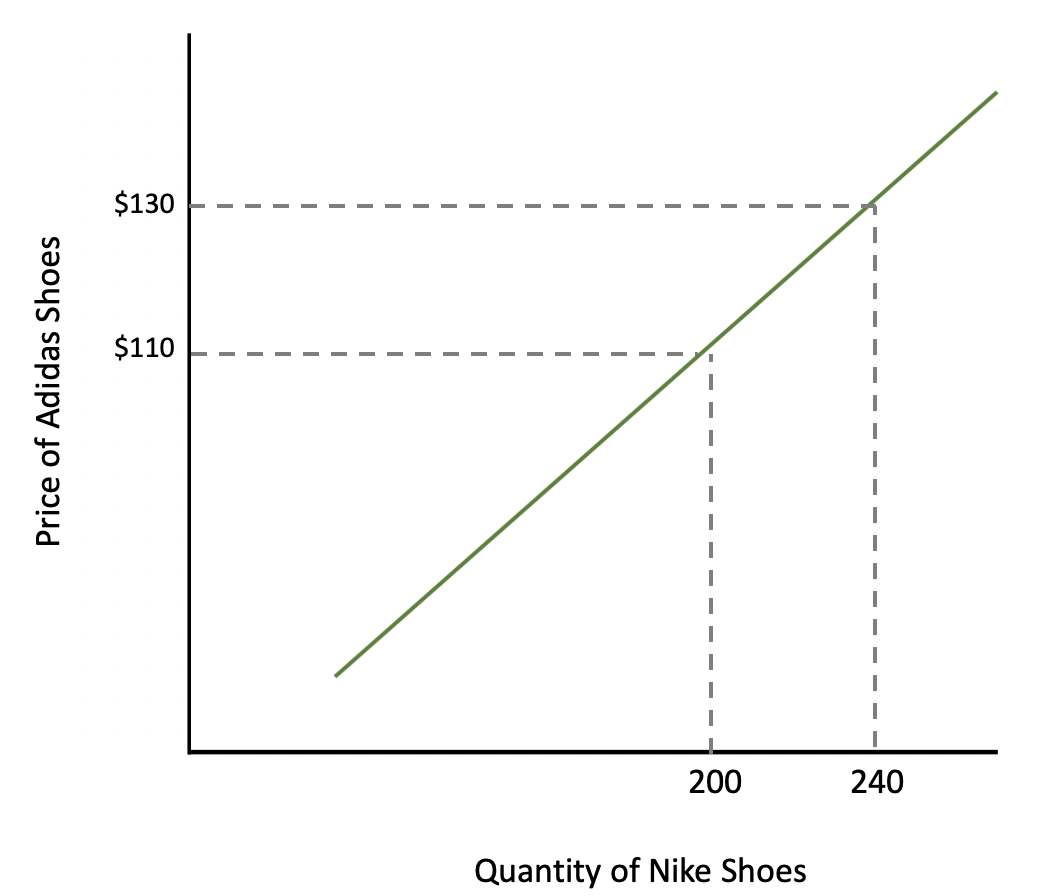 If we perform the calculation, we get a cross-price elasticity of 1.1.

In this case, it does matter what direction price and quantity are moving. We are not just looking at the absolute value, because with cross-price elasticity:

In this case, with a positive 1.11 coefficient, Nike and Adidas must be substitutes. When Adidas raises prices, people will buy more of a substitute, like Nike.

Finally, let's discuss our last type of elasticity, income elasticity. Income elasticity is an economic measure of change in relation to income and demand for normal, inferior, and luxury goods.

Continuing with Nike as an example, if our incomes rise, will we buy more or less Nike apparel? 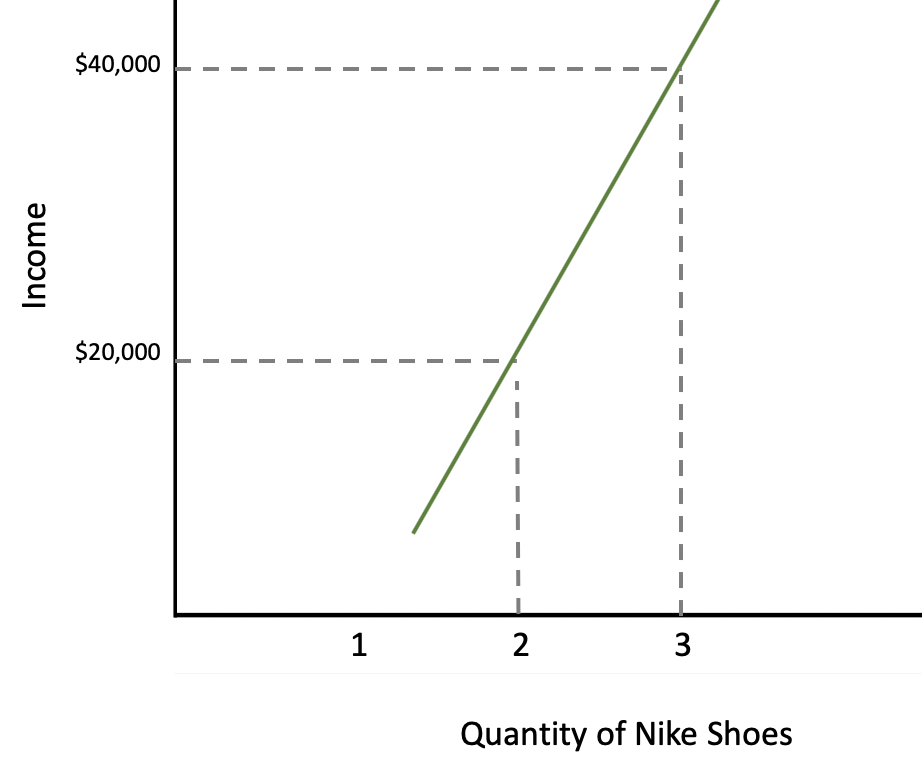 As you can see, there is a positive relationship between income and Nike shoes purchased.

Performing the calculations, we see that we get an elasticity coefficient of a positive 0.50.

Again, the coefficient does matter in terms of the sign; it is not just absolute value. Therefore, that positive 0.50 tells us that the good is a normal good. If the coefficient were negative, the good would be an inferior good.

An economic measure of change in relation to income and demand for normal, inferior, and luxury goods


A normal good is a good for which demand increases as income increases. 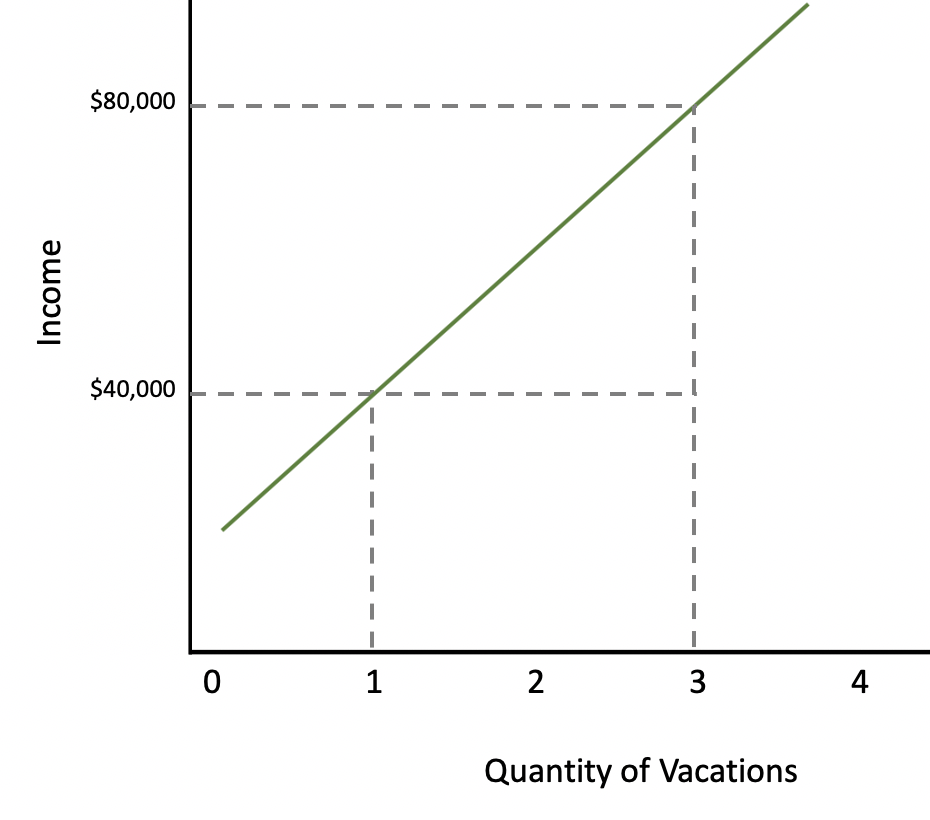 The coefficient, if you plug the numbers in, would be a positive 2, which would indicate that vacations are a normal good.


However, vacations are also considered a luxury good. When coefficients are greater than 1, it means that our consumption of these goods increase by a greater percentage than the income increase. In this example, we were only able to afford one vacation before the income change.

A luxury good defined is a good that offers better quality and features which is consumed when income rises.


Lastly, generic cereal is an example of an inferior good because you can see that as our income goes up, the quantity purchased goes down. 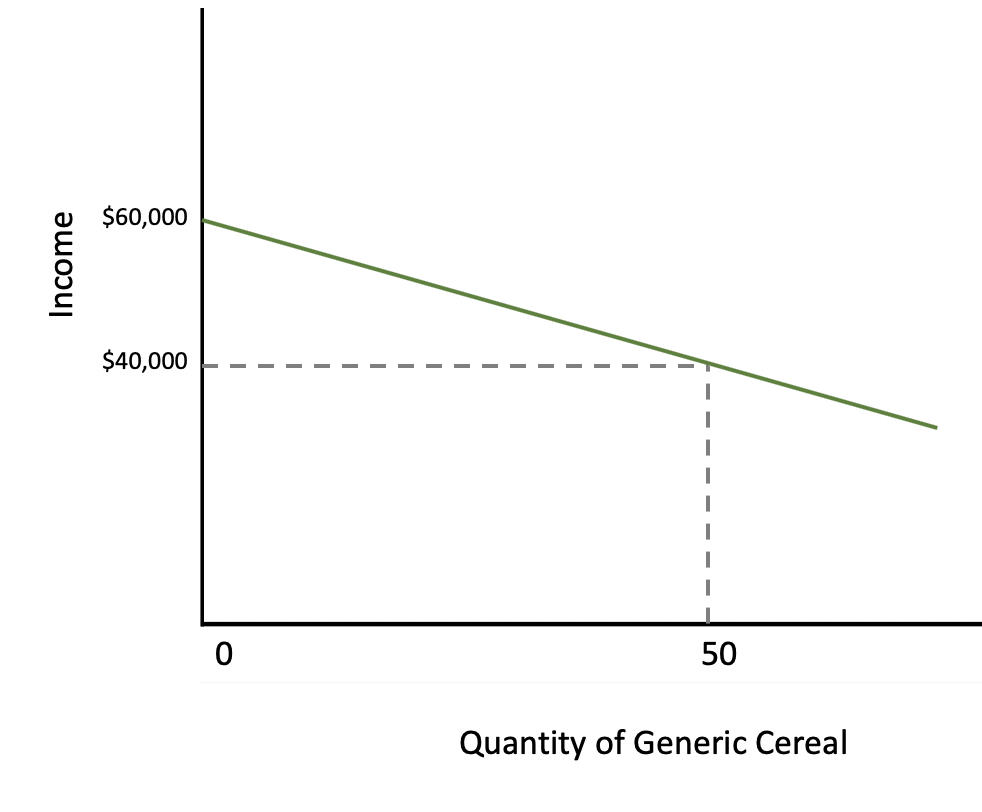 For the above example, let's plug our numbers into the elasticity equation.

The coefficient is negative, which indicates an inferior good, or one for which demand decreases as income increases.

Change of demand (supply) that occurs due to change in price of substitutes or complements.

Measurement of change in quantity demanded (supplied) which indicates the sensitivity of one variable to characteristics of another variable or income.

An economic measure of change in relation to income and demand for normal, inferior, and luxury goods.

Elasticity of demand (supply) when the price of a good changes, keeping all other variables and goods separate.