Or
Close Popup
+
2 Tutorials that teach Elements in Context
Take your pick:
Previous Next

Review the elements in context being able to recognize its utilization in a visual design work.

(more)
See More
Tutorial
what's covered
This lesson will take you on a virtual field trip to an art gallery where you can look at how all the elements of visual design interact. Specifically, you will look at:

Let's begin your virtual gallery tour with the vector image below. 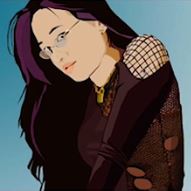 The first thing you should notice is the use of space and figure-ground separation. You will also notice that the use of color creates some depth and separation between the girl and the background, as well as between the face and the hair. Even though the colors are flat, the separation is still visible.

There is a good use of texture in the fabric, which creates a pattern around the shoulder and body.

Finally, the image is framed such that the figure is surrounded by negative space, which makes her the focus of the image.

Next, you have the more abstract image below. 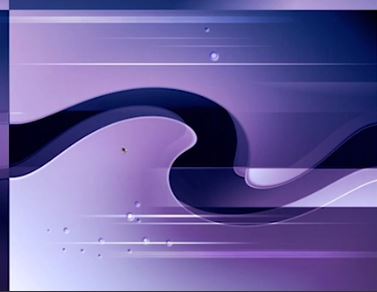 You can first notice a great use of line, and a great sense of movement and energy. There's also the use of dots, both on their own and arranged in clusters. The dots are positioned close together to add tension and provide a bit of energy to the piece.

Finally, there's a good use of gradation in the values from dark to light, which provides a sense of direction. The position of light and dark against one another also creates a nice separation between the spaces.

Next, you have this image of a tiger. 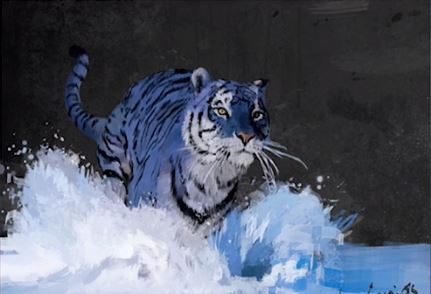 Even though this tiger's a bit sketchier, like the first image, there's a very clear separation of space between figure and ground. The image is also very dynamic, and provides a clear sense of action going on all around.

The layered shapes and elements in the water create very nice texture. The fur also has a lot of overlapping elements and shapes creating texture. If you zoom in, you might even see some patterns that start to develop as well.

Predominately blue hues give this piece a cooling feel. The image also displays a range of saturation to provide some visual interest or variety.

This next image has a very clear use of saturation to create a focal point and areas of interest. 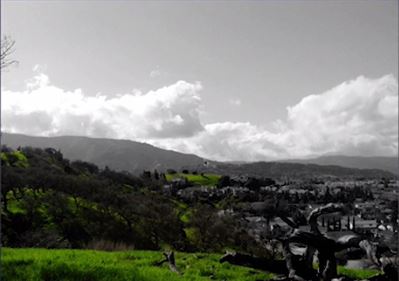 As you will recall, there's no line in nature. But there are a lot of hills that create that sense of line. There are also shapes and line being created within the positive and negative spaces.

Finally, this image has pretty high contrasting values. Although it's not as dynamic as past examples, chiaroscuro does create a nice punch in this image via the high contrast between dark and light.

In the image of the peacock below, there's a nice use of line with varied weight all over— thick and thin. 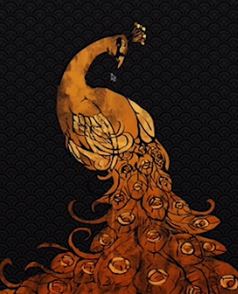 It provides a good sense of motion and a more dynamic feel that gets your eye moving in the direction where the feathers fan out. There are mostly curvilinear elements going on here.

Color and value also play an important role in creating space and separation between the background and the foreground elements, the negative space, and the darker and lighter values. Framing enhances the design and allows you to follow the flow and direction towards the peacock feathers.

Finally, there's a lot of texture, both on the surface of the peacock and in the background, which almost acts like fish scales. There's a pretty clear pattern that develops as a result of the proximity of the shapes. All these elements in the peacock feathers also act as dots. They form their own point of interest and are placed in clusters, which provide tension and create action in this area of the piece.

Here's an image of a common video game in the mobile space. 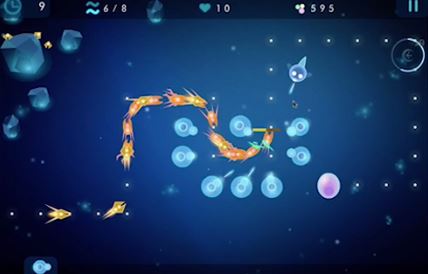 Again, you have dots positioned in clusters that act as areas of tension and focus. There's all this tension going on between them, highlighting where the action is happening.

The small, simple lines, which almost act as bullets, also provide direction and action. Although it's not obvious, the lines do vary in weight. You get a sense of direction as a result of that line weight and varied shape.

The other elements in the top left corner are a great example of form. You can see that multiple shapes are being used to create three-dimensional objects with depth and volume. Like some of the other examples, value plays a very important role here. This is because the blue hues help separate the invaders with their yellow-orange hues. Likewise, there's also a very clean separation of background and foreground space so that the player or the viewer focuses on the elements up front, and not on the vast and empty area in the back.

Finally, in a similar fashion, the gradient of values is used to create a vignette effect, which is another way to frame an image without using rectilinear elements. You may notice that the light value gradates towards a darker value in the corner. This creates a circular frame, which keeps your eye centrally focused.

Value and addition are used effectively to separate elements of information from the area of game play. A lot of thought goes into game design to determine how to direct the eye and show areas of focus without overwhelming the player or providing too much to look at.