Identify aspects of the unemployment rate.

Tutorial
what's covered
This tutorial will cover the employment report and the unemployment rate, including how unemployment is measured and why it is considered to be a lagging indicator.

You have seen a business cycle before, and we know that it is normal for the economy to go through periods of growth and contraction.

Along this business cycle, most people are generally concerned about things like the unemployment rate and inflation--two of the most common concerns for consumers. 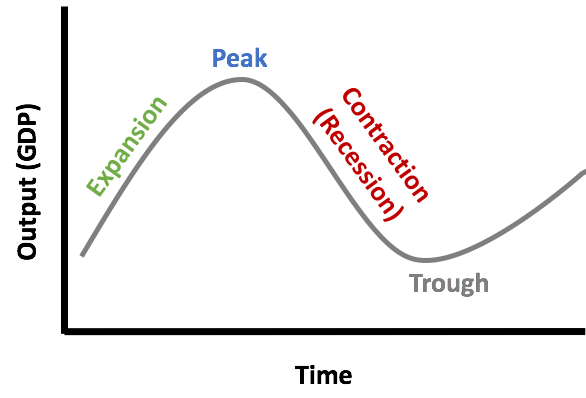 In this tutorial, we will discuss the unemployment rate.

Now, economists use many different kinds of data to help them determine three different types of indicators:

The Bureau of Labor Statistics publishes the Employment Situation Summary every month.

The first part of this report details the number of jobs created in the economy by sector, breaking it down by either an increase or decrease in non-farm payrolls.

try it
You can access the most current release by visiting the Bureau of Labor Statistic's website here: http://www.bls.gov/news.release/empsit.nr0.htm

Here is an excerpt from the January 2014 report:

This snapshot is a basic overall summary. The report itself is much more detailed.

Notice the mention of non-farm payroll, which is the number of individuals employed outside the farming sector. It is important to note that the farming sector is not included in these figures on jobs created or jobs lost.

The number of individuals employed outside the farming sector

The unemployment rate is also measured by the Bureau of Labor Statistics.

try it
Again, you can access the most recent report on the Bureau of Labor Statistic's website here: http://www.bls.gov/news.release/empsit.nr0.htm

Here is an excerpt from the January 2014 report:

The number of unemployed persons declined by 490,000 to 10.4 million in December, and the unemployment rate declined by 0.3 percentage point to 6.7 percent.

Again, the report itself is far more detailed.

To be unemployed, you need to be:

Because of this definition, the unemployment rate generally discussed in the media does not actually represent the full number of people who are actually unemployed. There is a margin of error, up or down.

So, not in the labor force are people who are either not looking for work because they do not want a job or they have given up looking.

When we calculate the unemployment rate, we take the number of people unemployed and divide by the labor force (not the overall population).

Because it is impossible to know every single person in this situation--because not everyone files for unemployment--the government conducts a monthly sample survey called the Current Population Survey, or CPS.

This survey includes about 60,000 households, or approximately 110,000 individuals, and they try to ensure that it is representative of the entire U.S. population.

Interviewers ask questions about household members' labor force activities, and then people are classified as follows:

Of those people who are no longer actively looking for a job, some are what we consider marginally attached or marginalized workers, or discouraged workers, referring to people who have completely given up looking, because they think there is no longer any hope of finding a job.

5. Unemployment as a Lagging Indicator

Recall that a lagging indicator describes what has already happened in the economy.

Firms do the same thing in the opposite situation. They respond to a downturn in the economy. When they see the decrease in demand for their good or service, they lay off workers and produce less.

Therefore, unemployment does move with the business cycle, but it generally lags behind. People get their jobs back only after the economy has begun to recover, which is why we call unemployment a lagging indicator.

Because of the statistical issues in calculating an accurate unemployment rate, it is not a perfect indicator of how our economy is performing; it has its strengths and weaknesses.


During a long recession, the unemployment rate might actually be much higher than the one discussed in the media, because there may very well be more people who would want a job but they are no longer considered unemployed because they have given up looking.

The longer a recession lasts, the more this can, in fact, be the case. These are people we refer to as discouraged workers.

There are also many people working part time, who may have had their hours cut. These people are not considered unemployed, yet working 10-15 hours a week is certainly not going to sustain them financially. They would likely want to work a lot more hours.

Therefore, the unemployment rate that is published does not take these things into consideration.


However, the unemployment rate is still one of the most popular economic indicators discussed, because it gives macroeconomists an idea of how firms are responding to economic conditions, how they feel about the economy, and how many people in our labor force are not being utilized.

It is important to keep in mind, though, that there is a significant margin of error.

summary
Today we learned how unemployment is measured and calculated, as well as what the employment report includes. We learned that the unemployment rate and job gains are considered lagging indicators. It is important to note that because of the survey process of estimating all of these figures, there are strengths and weaknesses of using the unemployment rate as an indicator of how our economy is performing; we need to keep in mind that there is a significant margin of error.

The number of individuals employed outside the farming sector.