Or
Close Popup
+
1 Tutorials that teach Evaluation and Analysis of Arguments
Take your pick:
Previous Next

Evaluation and Analysis of Arguments

(more)
See More
Tutorial
what's covered
Every argument must make both an inferential and a factual claim. To succeed, an argument must do both things well, but each must be evaluated separately. However, before we can precisely evaluate an argument, we must know whether it is deductive or inductive. Knowing this tells us how strict the standards are for the inference, and enables us to evaluate each argument accordingly.

This tutorial examines the evaluation and analysis of arguments in three parts:

These considerations are closely linked to the concepts of deductive and inductive arguments. Reviewing the terms below will help you to understand these concepts.

A claim that some fact (or facts) corresponds to reality

A statement presented for acceptance or rejection in an argument without support, but that is intended to support a conclusion

You cannot properly evaluate a sophisticated argument without first identifying whether it is deductive or inductive. This is so because the evaluations are different. All evaluation is based on kind.

The sun has risen every day for the past billion years.

Our current understanding of the laws of astrophysics tell us that this phenomenon should continue.

Therefore, the sun will rise tomorrow.

Before we evaluate this argument, we must first determine whether it is deductive or inductive: whether the conclusion is intended to follow with logical certainty. Can you imagine not only that the premises are true (which should not be difficult because they are true), but also the conclusion being false (at the same time)? You can.

Imagine that a meteor obliterates Earth tonight, or a religious apocalypse occurs, or the sun enters the "red giant" phase of its life-cycle and consumes Mercury, Venus, and Earth. In all of these cases the conclusion will not be reached.

Based on what we have just learned, this argument is inductive because it makes no claim to logical certainty. However, certainty that the sun will rise tomorrow is inductive certainty. This indicates two things: First, there is nothing wrong with induction, just because it is induction. It is not unreasonable to believe that the sun will rise tomorrow. (Problems generally arise only when people evaluate induction deductively, or vice versa.) Second, the vast majority of our reasoning is inductive, so the vast majority of our beliefs are justified inductively.

Consider some more of your beliefs that are based on induction: that your parents really are your parents; that Julius Caesar lived; that summer is warm and winter is cold; that your arm won’t fall off in the next 30 seconds; etc.

think about it
Consider the arguments that you would use to justify these beliefs, and why none of them achieve logical certainty.

But if the majority of our reasoning is inductive, what is deduction? Note that induction always involves cause and effect, and the world, in making inferences. Deduction involves neither of these. The inferences of deduction rely on definition and form.

LeBron James is over six feet tall. Therefore, he is over five feet tall.

It would be incorrect to assert that the fact that LeBron James is over six feet tall causes him to be over five feet tall. Instead, it is part of the definition of being over six feet tall, an entailment. Note that this type of argument does attain logical certainty, but remember that logical certainty is about the relationship between the premises and the conclusion, not just about the conclusion. Therefore, the question is not "can I imagine LeBron James not being over five feet tall?" (you can). Instead, it is "can I imagine him being over six feet tall" and "not being over five feet tall?" No, this is impossible. This argument attains logical certainty because it is about definitions, rather than the world. Other common deductive arguments are categorical (from the definitions of “all”, “no”, and “some”), hypothetical (from the definition of “if…then”) and disjunctive (from the meaning of “either/or”).

Once we have determined whether an argument is deductive or inductive, the evaluation follows the pattern discussed in previous tutorials, but with more precision. We still ask the inferential question first: “Assuming all premises are true, do they support the conclusion?” However, now we understand the notion of support deductively, that is, as guaranteeing or logically entailing the conclusion. When considering an inferential claim deductively, we label the argument as valid or invalid.

All Republicans are space aliens.

Barack Obama is a Republican.

This argument is valid. We ask, “If it is true that all Republicans are space aliens and it is true that Barack Obama is a Republican, does that guarantee that Barack Obama is a space alien?” The answer is yes. We must establish an argument's validity (or lack of it) before checking the factual claims. Now try to evaluate these three arguments (the solutions are provided below):

1. Ask yourself, if it is true that Lebron James is over five feet tall, then does it guarantee that he is over seven feet tall?
The answer is “no”, so this argument is invalid.

2. Ask yourself, if it is true that Lebron James is over twelve feet tall, then does it guarantee that he is over seven feet tall?
The answer is “yes”, so this is argument is valid.

3. Ask yourself, if it is true that Lebron James is over five feet tall, then does it guarantee that he is over six feet tall?
The answer is no, so this is an invalid argument.

Whether or not the premises or conclusion are true does not enter into the determination of validity. However, validity is important because it means that the premises guarantee the conclusion. When validity has been established, we simply have to decide whether we accept the premises. If the argument is valid, we only need to ask a question of fact: “Are all of the premises true?” This will determine the soundness or unsoundness of the argument.

An unsound argument is a bad deductive argument. It falls short of soundness by either making a bad (i.e., invalid) inferential claim or by containing at least one false premise. It does not provide an adequate reason to accept its conclusion. Invalid arguments — and valid arguments with at least one false premise — are unsound. Each of these types of arguments gives reason to not accept its conclusion.

Note that if one wants to reject the conclusion of a valid argument, one must reject a premise. Try to evaluate the following argument:

This is a deductively valid argument known as the Logical Problem of Evil. To reject the conclusion, that is, to maintain that there is a God, we must show that a premise is false or (as is more generally the case in a philosophical debate), that there is a better reason to believe that the premise is false than to believe it is true. Because this argument is valid, we are left with no other options if we want to reject the conclusion.

This is an inductive argument called an "argument from authority." To determine its strength, the question to be asked isn’t whether scientists believe such a thing but, if they do believe such a thing, does that make the conclusion probable? In this case, the answer is yes, so the argument is strong.

think about it
Arguments from authority are some of the strongest we have. Consider the following things you believe that are based on authority:

The fact that authorities are occasionally wrong doesn’t make the argument weak, it makes it inductive.

Now consider three more inductive arguments and see if you can determine their strength or weakness:

hint
“X” doesn’t need to be filled in because that is only relevant to the factual claim.

The answer is that this argument is weak. Kim Kardashian may be an authority about some things, but she is not generally considered an authority on healthcare, even if you agree with her. Agreeing with her means that you accept the conclusion, not that the argument establishes it. If the only reason we have to believe X about healthcare is that Kim Kardashian said X, that is not enough for us to believe that X is true.

try it
The Browns have played terribly so far this season.
Therefore, they will lose this week.

This argument is strong (it is a prediction, in which we use the past to assert the future). If it is true that the Browns have played terribly all season, we might bet (perhaps literally) that they will lose this week. It is a good bet. If we lose our bet, it’s because induction involves chance, not because our bet is irrational.

This argument is weak because the conclusion is possible, not probable. Because induction deals in probability, it also involves scaling, because it makes sense to talk about stronger arguments and weaker arguments. This is unlike a deduction, in which premises establish their conclusion with either 100% or 0% certainty. For example, both the conclusion that the sun will rise tomorrow, and that the Browns will lose this week, are supported by strong arguments, but we should be more certain of one than the other.

After we have determined strength, we must check the factual claim and ask, “Are all of the premises true?” to establish whether the final evaluation is cogent or uncogent.

An uncogent argument is a bad inductive argument. It falls short of cogency by either making a bad (i.e., weak) inferential claim or by containing at least one false premise. It does not provide an adequate reason to accept its conclusion. Therefore, weak arguments, and strong arguments with at least one false premise, are uncogent. Either of them gives us reason to not accept their conclusions.

The flow chart below is a useful tool to which you can refer when evaluating arguments. 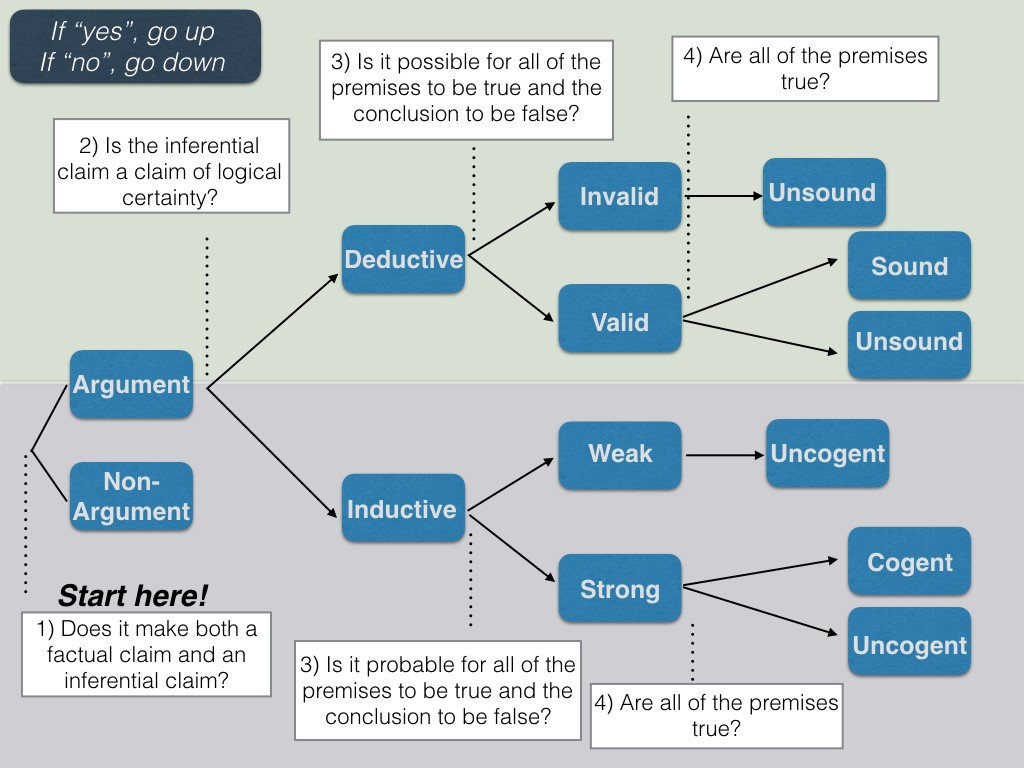 summary
Before we evaluate an argument, we must first determine whether it attempts to establish its conclusion using logical certainty, which (therefore) makes it deductive, or something less, which makes it inductive. Once we have determined this, we can check the inferential claims in a more refined way, using the concepts of valid and invalid for deduction, and strong and weak for induction. We then consider the factual claim to arrive at a final evaluation of the argument: sound and unsound for deductive arguments; cogent and uncogent for inductive arguments.
Terms to Know