Or
Close Popup
+
4 Tutorials that teach Expected Value
Take your pick:
Previous Next

Calculate the expected value of a given situation.

(more)
See More
Tutorial
what's covered
This tutorial will discuss determining the expected value. Our discussion breaks down as follows:

1. Expected Value of a Probability Distribution

Expected value is the long-term average taken by the outcomes from a chance experiment. It can sometimes be a confusing term, so we can also use the term mean or average of a probability distribution.

The expected value is found by adding the products of each individual outcome and its probability.

hint
Notationally, we can write the expected value of a probability distribution for x as μx (mu meaning mean) or E(X) (E meaning expected value). Both of these are accepted notations, though typically, μ will be used.

The long-term average value taken by the outcomes from a chance experiment. It does not need to be one of the possible outcomes.


1a. Expected Value of a Spinner 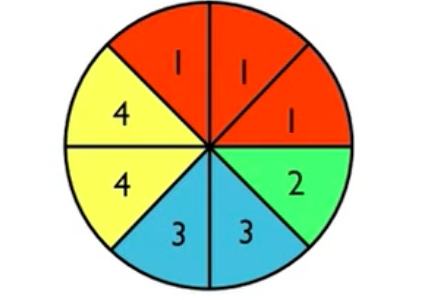 think about it
What do you think would happen if someone spun the spinner a number of times? Suppose this spinner was spun eight times and it went according to the expectations.

So if the spinner was spun eight times, we would expect three 1's, one 2, two 3's, and two 4's to be obtained. The law of large numbers says that the longer this is done (in the long term), this is exactly what will happen. About three out of every eight times, you'll get a 1. About one out of every eight times, you'll get a 2, etc. Therefore, you're going for the long-term average. Now, if that's the case, the mean is just going to be the average value from those eight spins:

The average value from those eight spins is 2.375. However, you can also rewrite that fraction by grouping the 1's, the 2's, the 3's, and the 4's. The 1 appeared three times, the 2 appeared one time, the 3 appeared twice, and the 4 appeared twice.

You can continue breaking this down by having each addend individually divided by 8 and then added. So now it might look like this:

These numbers are looking quite familiar, aren't they? It seems like these were the numbers from the probability distribution, where these numbers-- 1, 2, 3, and 4--were the potential outcomes, the values that will be referred to as "x". The fractions--the 3/8, 1/8, 2/8, and 2/8--were their probabilities.

This is how expected value will be calculated: the sum of each outcome times its individual probability.

The expected value, also called the mean of a probability distribution, is found by adding the products of each individual outcome and its probability. In this case, 2.375 was the result.

It is not a possibility on the spinner, nor is it an integer. Since the focus is about the long-term average, it doesn't actually need to be an integer. It doesn't need to be possible, either.

1b. Expected Value of a Roulette Wheel

Consider the roulette wheel below. There are 38 sectors: 18 red, 18 black, and 2 green. All the sectors are equally likely. 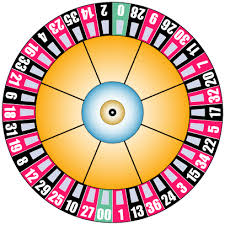 What is the mean of a distribution showing the payouts and probabilities from betting red on a roulette wheel? If you bet $1 and you win, you win $1. If you don't win, you lose the dollar that you bet.

summary
The expected value, also called the mean, of a probability distribution is taken by multiplying each probability times its outcome, then adding each of those products. It doesn't have to be an integer or a possible value.

The long-term average value taken by the outcomes from a chance experiment. It does not need to be one of the possible outcomes.