Tutorial
what's covered
In the decades immediately following the end of World War II, many Americans lived more comfortably than they had before the war. Economic security was not without consequences, however. The pressure to conform to social norms during the Cold War impacted family life and gender roles. It was expected that Americans would dedicate themselves to building prosperous, stable, nuclear families at the dawn of the nuclear age.

This tutorial gives you an opportunity to examine how the Cold War affected the American family, in three parts:

Before World War II ended, Americans were concerned about how to reintegrate veterans into civilian life, especially family life. Many soldiers eagerly awaited the opportunity to return home, but they also worried that they might not find work in the postwar economy. Doctors warned fiancées, wives, and mothers that returning soldiers might have psychological problems that would make them difficult to live with.

To address these concerns, Congress passed the Servicemen’s Readjustment Act, also known as the GI Bill, in 1944.

Among the most significant legislation in American history, the GI Bill provided support to millions of families during the postwar era. 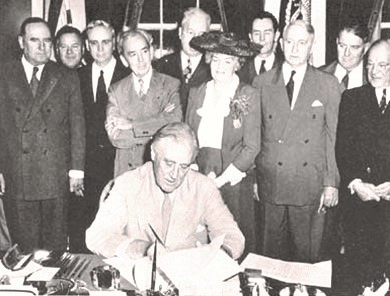 Under the terms of the GI Bill, every honorably discharged veteran who had seen active duty was eligible to receive unemployment compensation for one year. It also paid the tuition of veterans who chose to attend college or vocational school, and provided stipends to cover living expenses as they completed their studies.

did you know
The GI Bill contributed to a dramatic increase in the number of male students at American colleges and universities. More than two million former servicemen took advantage of the GI Bill to complete college. By 1950, 7.3 percent of American men had a college degree (in contrast to 5.5 percent in 1940). College enrollment increased throughout the postwar era.

Upon graduating from college or vocational school, veterans were prepared for skilled positions in “blue collar” work (e.g., manual labor in factories, or in the construction industry). Others were employed in well-paid, “white collar” positions in sales or management, or in one of the professions (e.g., law, medicine). Loans provided through the GI Bill also enabled many veterans to start businesses.

Their salaries, along with low-interest loans provided by the GI Bill, enabled veterans to purchase homes for their families in the rapidly-developing suburbs of American cities; a phenomenon known as suburbanization.

In addition to the low-interest mortgages available through the GI Bill, other factors contributed to a postwar housing “boom” throughout the country. Following are the most notable of these factors:

Housing construction was one of the industries that experienced a severe decline during the Great Depression. As banks collapsed, credit dried up, and investment capital — including capital that could have been invested in housing construction — was scarce. Housing shortages occurred in many cities during World War II as Americans migrated in search of work in wartime industries. The demands of war mobilization made it difficult for the housing industry to meet the demand for new homes. When the war ended, real estate developers and contractors rushed to alleviate the housing shortage.

The unused land on the outskirts of American cities was an ideal location for developers to build new homes. This land was relatively low in population density, and vacant land outside cities cost less than it did in within city lines.

Developers built acres and acres of inexpensive tract housing in suburbs throughout the country. One of the developers who took advantage of the situation was William Levitt, who purchased farmland in Nassau County (on Long Island in New York) in 1947, and built a suburban community named Levittown.

Levitt’s houses cost only $8,000 and could be purchased with little or no down payment. Families bought more than 1,000 homes on the first day that they were offered for sale.

Levitt built similar developments — also called Levittown — in New Jersey and Pennsylvania. As shown in the aerial photograph below, Levittown and other suburban developments transformed farmers' fields into rows of prefabricated houses separated by winding streets. 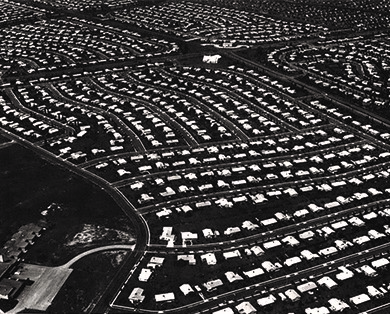 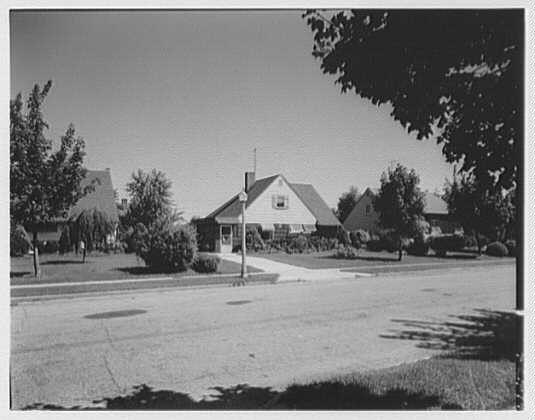 did you know
In 1962, folk singer Malvina Reynolds wrote a song called “Little Boxes” to describe suburbanization. Her song pointed out that although the houses were usually painted in different colors, suburban homes best resembled identical “little boxes” that were “made of ticky tacky” — i.e., the cheap or inferior materials that Levitt and other developers used to build them. Search the internet to listen to an audio version of this song!

Suburbanization was one indicator that the postwar economy was booming. The construction industry employed thousands of workers. So did the automobile industry, as everyone needed a car to commute between work and home.

The annual production of passenger cars rose from 2.2 million to 8 million between 1946 and 1955. By 1960, about 20 percent of suburban families owned two cars.

Housing construction and automobiles stimulated growth in affiliated industries including steel, oil, and lumber. The increased distance between work and home (in the suburbs), combined with the growing number of cars on the road, led to the development of convenience stores, restaurants, and drive-in movie theaters. Consumption habits were changing.

did you know
In April of 1955, businessman Ray Kroc built the first modern-style McDonald’s restaurant — complete with golden arches — in Des Plaines, Illinois. 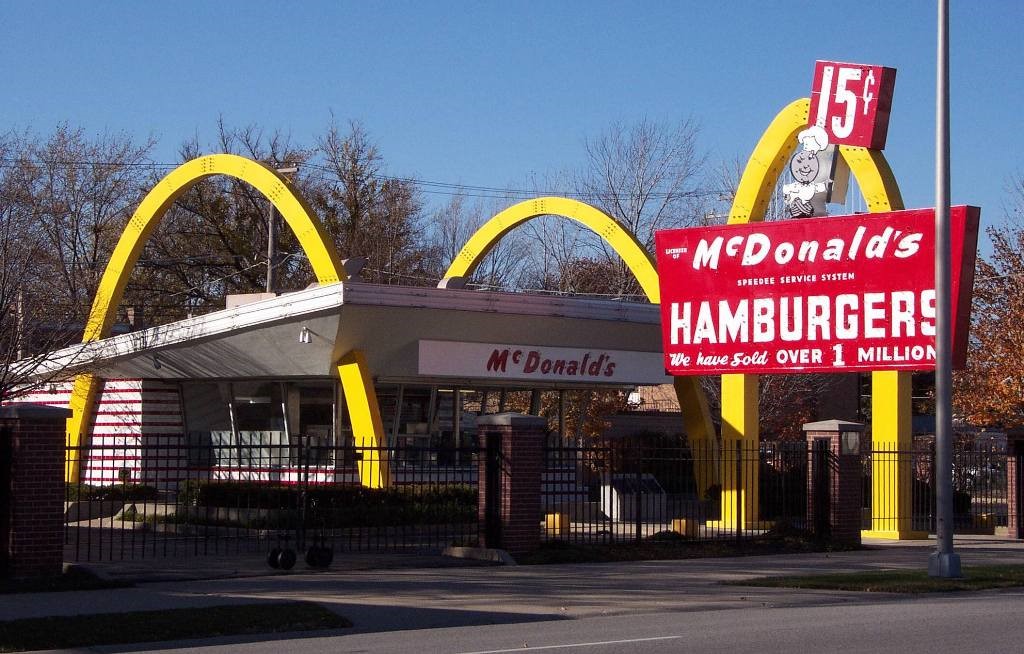 While working-class men found jobs in factories, service industries, and construction, middle-class men with college degrees worked for corporations that had grown substantially during World War II, due to defense spending. Continued spending during the Cold War sustained further expansion of these corporations. Some of them became too large for managers to be able to to build personal relationships with all of their subordinates. These corporations tended to value conformity to company rules and standards above all else.

Conformity also governed male suburban life. Suburban men were expected to marry young and start a family. Between 1946 and 1964, American families gave birth to the largest generation in U.S. history. This 'boom” in the number of babies being born produced the generation known as the baby boomers.

Large generation of Americans born between 1946 and 1964

Due to the emphasis on conformity and family life, bachelorhood was viewed as a brief, temporary state in a man’s life. The question of why some men chose to live alone baffled some commentators, as evidenced in the excerpt below from an article titled, “Men Without Women”, published in Look magazine in November of 1960.

While reading this excerpt, apply the lens of gender:

“Why do these men — more than one fourth of the males in the United States—choose to live alone?....Psychologists, sociologists and other authorities who have studied this phenomenon have reached these major conclusions about the American bachelor:

Happy, well-adjusted bachelors are, however, a minority among America’s unmarried men. Most of them — whether single, widowed or divorced — spend a good portion of their leisure time in a search for a mate.”

While men were expected to start a family, and to support it by working, social norms dictated that women remain at home, rather than work for wages. This was a significant reversal of the employment gains that women made during World War II.

did you know
After 1945, many women lost the industrial jobs that they held during World War II, as men returned home and re-entered the workforce.

Raising a family required women to spend most of the day caring for their children and their home. Advertisements for “labor-saving” devices and appliances that promised to make housework easier reinforced these expectations. The spotless homes depicted in movies and t.v. shows raised housekeeping standards and burdened women with additional housework.

Magazine and newspaper articles reinforced the assumption that women, like men, should marry young. Apply the lens of gender to the excerpt below (from “Women Without Men”, which was also published in Look magazine in 1960).

“...a little more than one third of the 62,827,000 women in the United States are getting along without steady male companionship. How do they adjust to this fact of life? How do they like their manless lot?....

Almost to a woman, those I interviewed said the same thing: “I have only one problem. I would like to be married, but I find it impossible to meet eligible men no matter how I try—and nobody can say I don’t try.”

The Look article states that most of the single women who were interviewed wanted to be married. However, one out of ten families in the U.S. was headed by a woman. This reveals that not all women were willing or able to live in a male-led household. Contrary to the assumptions (and advertisements) of the day, approximately 40 percent of women with young children, and half of women with older children, sought part- or full-time employment during the 1950s. Statistics like these indicated the desire of many women to enter the workforce. They also showed that the everyday necessities of middle-class suburban life required money — to purchase second cars, vacations, and college education for their children.

summary
During the late 1950s, millions of Americans enjoyed the affluence of suburban life. However, with comfortable living came an expectation of conformity to social norms. It was assumed that men would enter the workforce and become breadwinners for their families. Women were expected to be wives and homemakers. Advertisements, periodicals, and even folk songs reflected these gender-based expectations, even though they were not attainable for all Americans.

a program that gave substantial benefits to those who served in World War II.

large generation of Americans born between 1946 and 1964.

a population shift from urban areas into suburbs that accelerated in the United States following World War II.