Tutorial
what's covered
Fifteenth-century Flemish painting and Italian Renaissance painting both have unique characteristics and symbology. In this lesson, you will learn about:

big idea
Northern Renaissance painters began using oil paints before their Italian contemporaries, and created a unique style that blended the secular and religious with an emphasis on detail and texture.

The artwork covered in this lesson ranges from 1425 to 1510 in Flanders, as highlighted in the timeline below.

Here is a map of the region. Use the city of Brussels for a reference point. 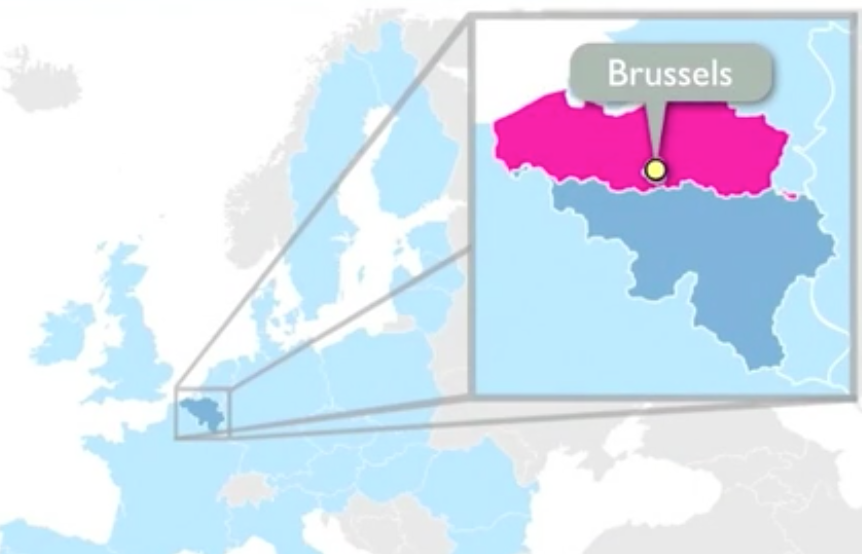 A region in Belgium characterized by a thriving artistic, educational culture and society, especially noted for textiles

Flemish and Italian Renaissance painting have both stylistic and material differences. Stylistically, Flemish painting was much more secular. While Italian painting often used fresco or tempera as mediums, these types of paintings would not work well in the north due to the colder climate.

did you know
When it was too cold, fresco or tempura paintings would not dry properly. This is just one reason why oil painting took hold in the north before it took hold in Italy. Eventually oil painting became the preferred method of painting everywhere.

Humanism was a theme in Italian paintings from this period. The application of rational, scientific principles, such as one point, or linear, perspective was also common in Italian paintings. On the other hand, in Flanders, the Flemish emphasis was on textures, textiles, and detail. For the Flemish, the overall look of the painting was more important than the scientific mathematical qualities of it.

did you know
Another reason oil painting became the preferred method was because more detail could be achieved using oil, due to the layering process. A glaze is laid down, and gradually the artist builds up color, adding depth to that color.

2a. Mérode and Ghent Altarpieces
Robert Campin was one of the earliest artists to use oil painting, and by the fifteenth century this technique was mastered by a number of Flemish painters. Oil paint is applied as a series of glazes to build up depth and color in a way that isn’t possible with tempera paint. Campin used it to create his “Annunciation Triptych.”

This depiction of the Annunciation by Campin occupies the space at the center of the panel shown above.

As you explore the image above, notice how detailed and realistic the clothing looks. Also take note of how the scene takes place in what would have been recognized at the time as a Flemish home. The perspective is somewhat off, particularly with the table. However, that would not have been the primary concern of the artist. Rather, the way the painting looked was more important than the proper application of scientific perspective, which wasn’t really known in this region at the time.

The objects placed within the room—the extinguished candle, the lilies, the copper pot in the back, and more—were carefully selected, and are symbolic in some way of the purity of the Virgin Mary. The panel on the left depicts the donor and his wife looking in on the event while Mary’s husband, Joseph, works in his shop on the right panel making a mousetrap, symbolic of Christ’s victory over Satan. Christ is the bait for the devil.

In this next altarpiece by the artist Jan van Eyck, the three panels are divided horizontally, separating into two main horizontal registers.

did you know
The above panel is about 15 feet long by about 11 feet high, and it was painted in 1432. It is an oil painting on wood, which was common for this region, as wood was plentiful.

On the top, God is enthroned and flanked by Mary to his right and Saint John the Baptist to his left. On either side of the trio are choirs of angels playing the organ. Further still on the outer edges are the figures of Adam and Eve.

In the lower register, the community of saints congregates around the altar of the lamb, which is a symbol for Christ, and fountain of life, which is the octagonal object in the foreground of the middle panel of the bottom register. Van Eyck took extra care to render the entire composition in incredible detail and color. This altarpiece still stands as one of the greatest examples of Northern Renaissance painting.

2b. Arnolfini Portrait
Giovanni Arnolfini was a financier associated with the wealthy and influential Medici family of Italy. The portrait of Arnolfini and his bride, called the “Arnolfini Portrait,” by the artist Jan van Eyck, is a wonderful example that embodies the northern Flemish style that emphasized incredibly detailed and realistically textured works of art. Although this portrait appears to be a simple wedding portrait, the painting is abundant with religious symbolism.

The context is possibly that of the actual ceremony, but this is one of many theories. There are actually two other people in the room, van Eyck himself and perhaps a religious official, whose reflections can be seen in the tiny mirror in the back of the room. Around the convex mirror, which represents the all-seeing eye of God, there are tiny medallions depicting the passion of the Christ, a reminder of God’s salvation.

Arnolfini’s bride is located near the marriage bed, where the curtains have been pulled back. And the finial, which is the ornament on top of the bedpost, is of Saint Margaret, the patron saint of childbirth. The bride’s gesture and clothing suggest pregnancy, but she isn’t pregnant. This style of clothing was consistent with the style at the time. The clog suggests that the place that they are standing is sacred ground. The small dog is symbolic of trust or fidelity to one another, as well as their wedding vows.

think about it
Their position in the room is also interesting. He is closer to the window, as his life takes place in the outside world, while her position further in is suggestive of the traditional domestic role of a female at this time. Overall, this is a unique combination of the secular imagery that was common in the Northern Renaissance with the religious symbolism ever present in the Renaissance artwork of contemporary Italy.

2c. “A Goldsmith in His Shop”
Flemish artists carefully selected everyday items that could function symbolically in a composition.

This is evident in the painting below. “A Goldsmith in His Shop” is an example of the work of later Flemish panel painter Petrous Christus.

Take a look at the bride’s girdle on the table, a symbol of chastity. The goldsmith is possibly St. Eligius, who was a goldsmith before committing himself to his faith, sitting in his workshop wearing the gold ring of a wedded couple. It is believed that the local goldsmiths’ guild commissioned this work, and Christus undoubtedly chose the subject matter as a way of combining the religious with the secular.

2d. “The Garden of Earthly Delights”
The artist Hieronymus Bosch, who hails from the Netherlands, is one of most debated artists of this period. Much of his work is downright confusing. There is little that we know about his private life, which makes it harder to understand his work.

His work has been described as fantastical, satirical, surrealist, and obscene. This image in particular might fall anywhere in these descriptors. It is believed to have been commissioned as a private piece of art in celebration of a wedding. Regardless, it’s unique and a significant departure from the type of painting we see coming out of Italy at this time.

summary
Flemish paintings and Italian Renaissance paintings both have unique characteristics and symbology, especially those from the 15th century. In this lesson, you learned about the period and location of fifteenth-century Flemish painting.

In doing so, you began to explore Flemish vs. Italian Renaissance painting, which had both stylistic and material differences. Stylistically, Flemish painting was much more secular, and Italian painting used fresco or tempera as mediums. The application of rational scientific principles was common in Italian paintings, while the Flemish emphasis was on textures, textiles, and detail.

Finally, you compared works of art from this period, including:

A religious subject painted or carved on a screen above or behind the altar or table in a Christian church often made of two or more panels.

A region in Belgium characterized by a thriving artistic, educational culture and society, especially noted for textiles.

The process of applying pigments suspended in linseed oil to a surface characterized by quality that gives it a luminous appearance.