Recognize how to safeguard your financial assets from deceptive practices.

Tutorial
what's covered
In this lesson, you will learn how to recognize financial frauds and explore the strategies to protect against them. You will examine how strong technology skills can help keep you safe. Specifically, this lesson will cover:

In this course, you have learned many ways to save money for your financial future. You must also save your money from those who seek to take it away.

You should never become complacent when it comes to protecting your money. Unfortunately, there are individuals and organizations that exist to perpetrate numerous types of financial frauds. As a result, even if you make the wisest financial decisions and keep your savings in insured accounts, you can lose some or all of your financial assets to a scam artist if you are not careful. In this topic, we discuss how you can avoid being a financial victim.

before you start
Are you interested in a video preview of this lesson? Click play to learn more about deceptive practices that can rob you of your hard-earned money. Stop the video at 4:30, and then move on to section 1.

Fraud occurs whenever someone attempts to deceive you with a promise of goods, services, money, or other benefits that really do not exist, were never intended to be provided, or were misrepresented (see the Hint below). How common is financial fraud? The answer might shock you. One in every five Americans has been the victim of a financial crime. Older Americans are even more likely to be exploited financially.

hint
Fraud is always unethical, improper, and in most situations, illegal.

Occurs whenever someone attempts to deceive you with a promise of goods, services, money, or other benefits that really do not exist, were never intended to be provided, or were misrepresented.

You might have heard of Bernie Madoff. An old joke says that “Bernie MADE OFF with his investors’ money.” Bernie ran the world’s largest Ponzi scheme, in which investors collectively lost billions of dollars. As shown in the illustration below, a Ponzi scheme promises investors and savers a low-risk, high rate of return, interest, or dividends. Basically, this is how a Ponzi scheme works.

hint
A promise of low risk and high returns should warn you of a possible scam. 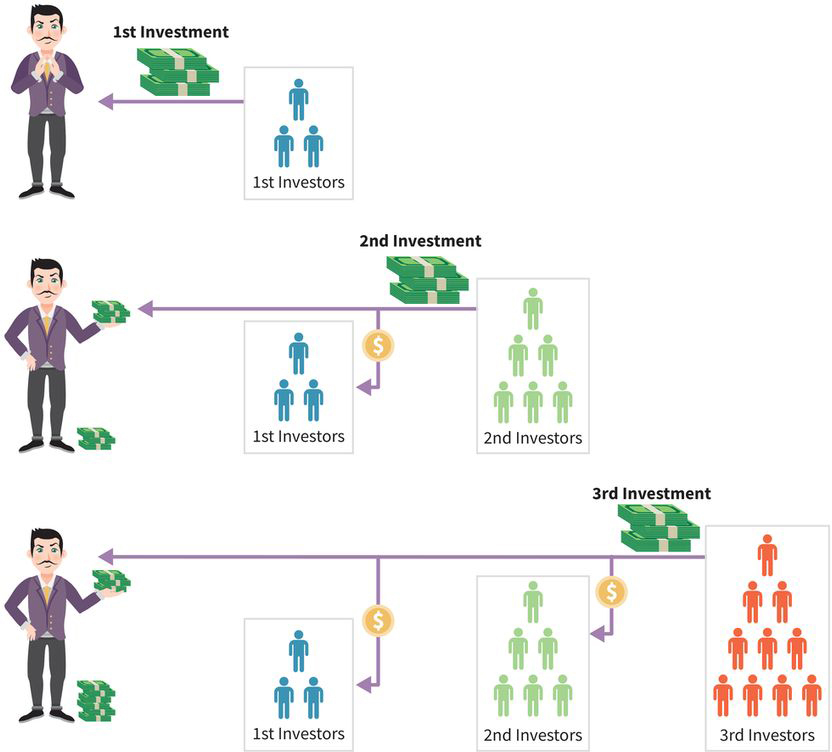 Madoff seemed honest and promised investors a steady 10% rate of return. Although his scheme worked for years, investors lost billions of dollars when it all fell apart at the end.

A financial fraud that promises investors and savers a low-risk, high rate of return, interest, or dividends.

Closely related to the Ponzi scheme are pyramid schemes. A pyramid scheme is a scam that is typically based on selling products or recruiting new members into an organization. Rather than promise a high rate of return like a Ponzi scheme, those who run pyramid schemes either promise high commissions on products sold or a sizable share of any money paid by new members to join the organization. The pitch is that you may not earn very much money selling products but if you can grow your network, you can earn substantial money based on fees paid by those in your network, as well as from commissions generated by your network. The whole premise of a pyramid scheme is to continually recruit new network members. Pyramid schemes are quite lucrative to those on the top of the pyramid, but like all scams, later investors or network members usually end up losing as it becomes difficult to find new network members. Once the number of new participants declines, the pyramid crumbles.

The illustration below shows how even the best sounding pyramid schemes always fail. 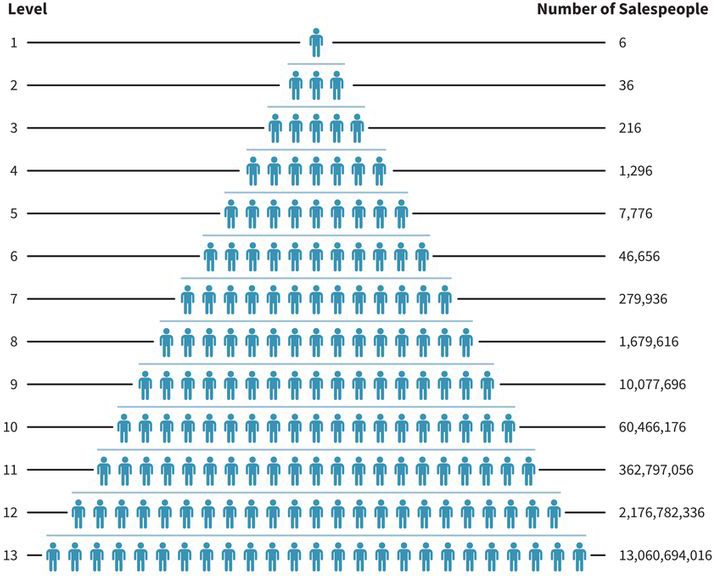 A scam that is typically based on selling products or recruiting new members into an organization.

Telemarketing fraud is also a huge problem in the United States. Telemarketing fraud occurs when a product or service is misrepresented in an unsolicited phone call, e-mail, or text message. A common line is as follows: “I am calling to inform you that you have won a free gift.” The reality is that no one ever gives away something for free. Always assume that there is a catch to the story. Usually, the catch is that you will lose money.

When a product or service is misrepresented in an unsolicited phone call, e-mail, or text message.

2. Protecting Yourself from Financial Fraud

As you can imagine, there are thousands of financial frauds, rip-offs, and scams operating in the marketplace today. Here are a few tips to help you stay safe and keep your money working for you.

You receive an email from a sender you do not recognize. They are asking for your address so they can send you documents related to an investment opportunity. It looks legitimate, but you have some concerns. How could you use your technology skill to research the sender before determining next steps?

If you believe you are being targeted, report the possible fraud to the police and your state’s attorney general’s office. A good rule is to be skeptical whenever it comes to anything that might separate you from your money!

summary
In this lesson, you learned about financial frauds that can rob you of your hard-earned money. Ponzi schemes are investment traps that promise high rates of return but then break that promise by syphoning the interest payments from other investors. Pyramid schemes are based on the continuous recruitment of new members into an organization to sell a product. In these schemes, salespeople are promised high commissions, but new members are very difficult to find. As a result, the pyramid crumbles for those not close to the top. Telemarketing fraud is the promise of free gifts over the phone or Internet. All of these practices are illegal, so know how to recognize them so you can protect yourself from financial fraud. Strong technology skills can often help you determine whether you are being targeted.

Occurs whenever someone attempts to deceive you with a promise of goods, services, money, or other benefits that really do not exist, were never intended to be provided, or were misrepresented.

A financial fraud that promises investors and savers a low-risk, high rate of return, interest, or dividends.

A scam that is typically based on selling products or recruiting new members into an organization.

When a product or service is misrepresented in an unsolicited phone call, e-mail, or text message.