Calculate the slope and y-intercept for a least-squares line.

Tutorial
what's covered
This tutorial is going to teach you how to find the least-squares line of a data set. Our discussion breaks down as follows:

Recall that the least-squares line is a best-fit line that is found through a process of minimizing the sum of the squared residuals. The general form for a least-squares equation is:

In this equation, b0 is the y-intercept and b1 is the slope.

The slope can be found using the following formula:

We can use these pieces of information to find the y-intercept and then create the least-square line equation.

The average x value for a sample

The average y value for a sample

Look at airfare prices for certain destinations from the Minneapolis/St. Paul Airport. Boston is 1,266 miles from St. Paul, and it has an airfare of $263, and so forth.


The scatter plot for this data looks like this: 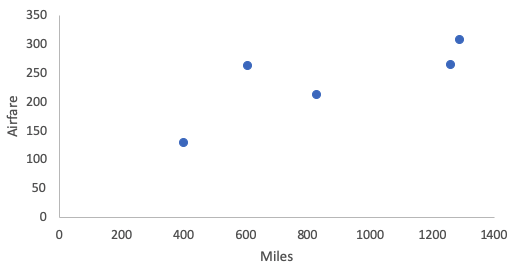 We need to find a least-squares line that incorporates this data. The explanatory variable, x, will be miles and the predicted response variable, y-hat, will be airfare, so we can write the following equation to start:

. We know the average number of miles, x̅, and the average value of airfare, ȳ. Airfare is predicted to be $234 when the miles is 882.4. Substitute this information into the equation and solve for the y-intercept, b0.

You get 113.11 for b0 so put that all together with the slope to create a least-squares line:

Once it is graphed, it does appear to go right through the pack of points like it's supposed to.

try it
You can also use a spreadsheet. In Excel, the easiest way to do this is to highlight your data and create a chart that is a scatter plot. When you do this, you have to actually right-click or control-click onto the data points themselves so that they are highlighted. Click "Add Trendline." Under Options, click "Display Equation." Essentially it’s the same idea. Don't get too frustrated because technology can rescue you here. Especially for larger data sets, finding this by hand can be difficult.

The line of best fit, according to the method of Least-Squares.

The mean of the explanatory variable.

The mean of the response variable.