Identify the proper usage of foreign keys within a set of given data models.

Tutorial
what's covered
This tutorial explores the use of foreign keys in more detail and the steps needed to ensure the keys are in the right tables in two parts:

As we have seen in prior tutorials, foreign keys are used to establish relationships between tables. Typically, we do use a primary key in one table and a foreign key in another table to create a one-to-one or a one-to-many relationship between those two tables.

An example of this could be an Employee and a Benefits table. In the Employee table, we would have information specific to the employee such as their name, address, position, and date hired. In the benefits table, you could have the investment plan, medical plan, dental plan, and life insurance plan information. In this scenario, it would not make sense to have the benefit data entered first as it is dependent on the employee. It would be illogical as well to have a record in the benefit table that is not related to a record in the employee table.

We can also see this one-to-one relationship in a set of tables that we have created previously with the representative and department tables:

The one-to-many relationship is similar to the approach that we take with the one-to-one relationship when it comes to foreign keys. However, it is clearer which table is the parent table and which table is the child table. Let us take a look at the Artist and Album table in our database. The one-to-many relationship, in this case, would follow the same guideline where we take the copy of the primary key from the table on the “one” side of the relationship or the parent table. Then incorporate it into the table on the “many” side or the child table. In our case, that will be the artist_id that is the primary key in the Artist table and the foreign key in the Album table. 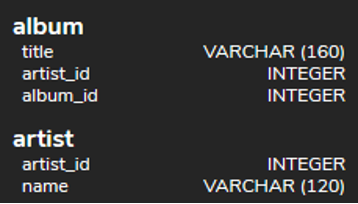