Identify the methods used by the government to finance fiscal policy.

As you may recall, there are two tools of fiscal policy:

Fiscal policy focuses on the policies in these two areas. The government can use these two tools to stabilize our economy's movement through business cycles, making sure that recessions are not too severe and expansions are not too rapid.

Expansionary policy is either monetary or fiscal policy that is enacted to stimulate economic growth, as measured by the GDP growth rate. In this tutorial, we are focusing on the fiscal policy side, which is used when the economy is slowing and we need to expand it or get people spending money again.

Contractionary policy is the opposite. It is either monetary or fiscal policy that is enacted to slow economic growth, as measured by the GDP growth rate. This is implemented when the major concern is inflation and we need to slow down spending and cool down prices.


So, we know that the government spends a lot of money in many areas, to name a few:

If the government wants to stimulate the economy and use expansionary policy, it can spend more money in any of these areas to create jobs and give people more money to spend.

Remember, we calculate economic activity by calculating GDP, known as the expenditure approach, which adds up everything that is being spent in the economy.

Let's review the equation for calculating GDP using the expenditure approach. Remember that Y is our economic activity or GDP, comprised of the following components:

Now, in expansionary policy, the hope is that if the government increases spending, this will, in turn, encourage greater consumer spending and business investment.

Unfortunately, if they end up increasing taxes in order to pay for that increased government spending, it will be counterproductive, because if they are trying to entice people to spend more money, and they increase taxes, this takes money away from people.

So, without increasing taxes, what does our government have to do? Well, the government has to borrow money to finance the increased spending needed to stimulate the economy. They do this by selling Treasury securities and taking on debt, which we will cover in the next section.

Let's walk through the process of debt issuance.

Suppose the government wants to fund a $1 billion program without raising taxes. The U.S. Treasury, then, has to sell IOUs, which they will have to repay later.

The IOU is in the form of a Treasury bond, bill, or note, and again, they need to sell $1 billion's worth of these.

So, let's assume that the Treasury sells a one-year Treasury bill with a face value of $1,000. Note, this is not necessarily how much the buyer will pay. The face value indicates that in one year, the government will owe the bondholder $1,000.

What the buyer or bondholder pays determines the rate of return on the bond. So, if the buyer pays $950, this is the price of the bond. The government is basically paying $50 to borrow $1,000.

If the government is paying $50, then, this is the return on the bond to the investor. It is a 5% interest rate or yield, calculated by taking the $50 return divided by the $1,000 face value.

If the price that buyers are willing to pay falls, then that interest rate is going to rise, which you will see on a graph at the end of this tutorial.

This, then, is the meaning of return or yield. Yield is the return on an investment. It is a combination of the interest rate on the face value of the bond and the difference in the purchase price and the price to the time held for a bond.

The return on an investment; a combination of the interest rate on the face value of the bond and the difference in purchase price and price to the time held for a bond

Now, when debt needs to be repaid, maturity is the time when the bond, bill, or note has reached its face value and payment is due.

As soon as the bond, bill, or note has reached maturity, the government either has to repay using tax revenue or new debt.

So many situations, new debt is chosen. In this case, we say the debt is rolled over, taking on new debt to repay old debt.

This chart outlines the different types of Treasury securities. Basically, the only difference between a bond, note, and bill is the length of time.

4. Supply and Demand for U.S. Debt

Here is a supply and demand graph for bonds. The y-axis represents the bond price. Note, this is not the face value of the bond, but rather the price that bondholders are paying. 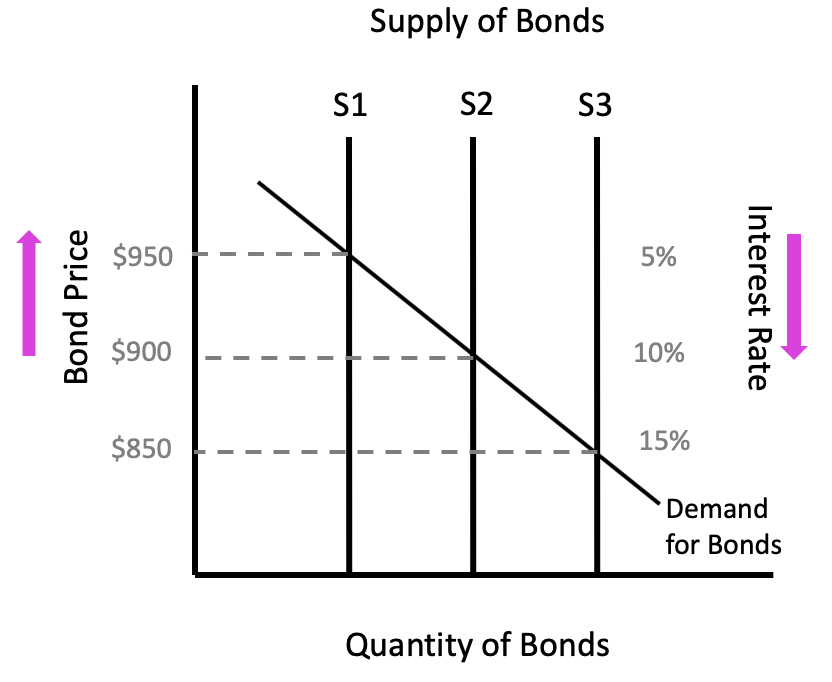 If you recall our first example, it involved a $1,000 face value bond, with a bond price of $950, which is what the investor is paying.

Now, the interest rate that the investor is receiving on that bond was 5%, so $50 was their return on the $1,000 face value of the bond.

So, the demand curve is a downward-sloping curve because there is an inverse relationship between the quantity demanded and the price of the bond.

hint
Note, if we were just mapping interest rates here, we would actually have an upward-sloping demand curve, but this visual representation is meant to point out the inverse relationship between the bond price and the interest rate.

However, demand for bonds has continued to increase, shown by the pink curve below. This has offset this effect of rising interest rates. 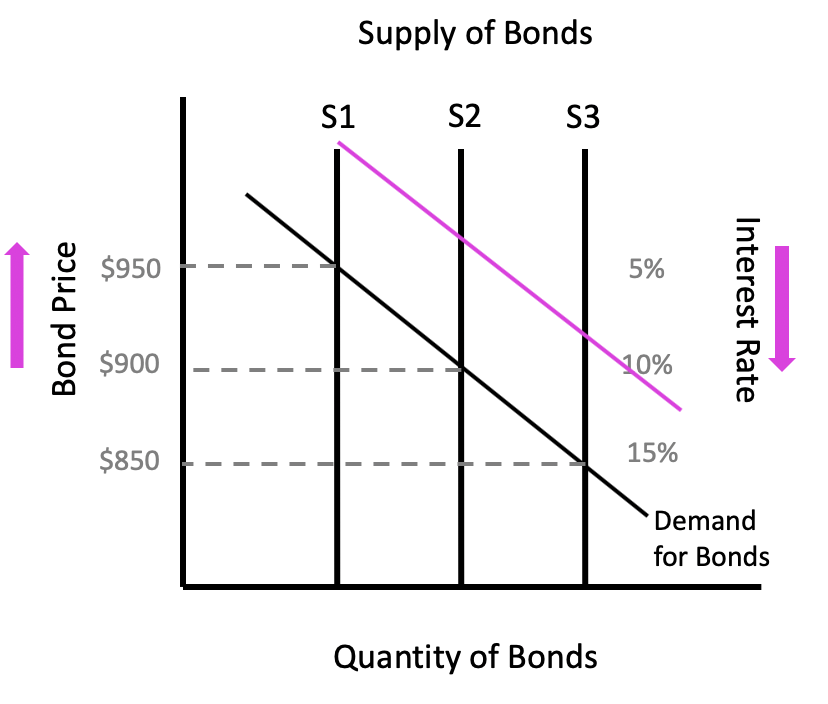 Keep in mind, though, that if at some point, we experience a drop in demand for our bonds, then it could become difficult for consumers to borrow money and interest rates would rise.

As soon as the bond, bill, or note has reached maturity, the government either has to repay the debt using tax revenue or new debt (rolling it over). Lastly, we discussed the supply and demand for U.S. debt, noting that as the price that bondholders pay rises, their return or interest rate declines, and as the price they pay falls, their return or interest rate rises.

Either monetary or fiscal policy that is enacted to stimulate economic growth (as measured by the GDP growth rate).

The return on an investment; a combination of the interest rate on the face value of the bond and the difference in purchase price and price to the time held for a bond.