Or
Close Popup
+
3 Tutorials that teach Global Economy
Take your pick:
Previous Next

Determine the considerations of business and trade.

(more)
See More
Tutorial
what's covered
The world is getting smaller. It's also getting more connected. The question is, is this a good thing or a bad thing? This tutorial will cover the topic of the global economy, providing an overview of international trade and the intersection of globalization and business. Our discussion breaks down as follows:

The way countries trade is based on a couple of key concepts.

Suppose you coach the Wichita Widgets football team, and you have a brand new player coming to play for you. He can run faster and throw the ball farther than anybody else, so he has an absolute advantage in throwing and running.

However, you can only have him play one position. Do you put him as a tight end, or do you make him a quarterback?

Well, he can only throw a little bit farther than the other quarterbacks but can run a lot faster than the other ends you're going to be playing against. So, you put him in the tight end position, because that gives your team a comparative advantage over the rest of the teams in the league.

Now, countries also talk about a national competitive advantage, and it's a combination of conditions that support an industry.

Consider Toyota and the manufacture of cars. In the early 1980s, Toyota was producing a product that specialized in quality--the quality of their automobiles was better than anybody else's. So, when it came time to trade and compete against the United States in their own backyard, they had an absolute advantage in the amount of quality that they had. However, choosing to produce these cars and specialize in that industry gave the nation of Japan a comparative advantage over the U.S. and auto production.

When thinking about trade between the products of two countries, we first need to consider the products in or out:

The U.S. grows a lot of peanuts, and they're exported and sold all over the world. On the other hand, if you want to buy a bottle of good French wine, you're going to have to import that from France.

When it comes to international trade, countries examine the balance of trade between themselves and other countries--one country at a time, specifically. They have trade surpluses and trade deficits.

Look at the graph below, which shows net imports and exports for Japan from 1979 to 2008. The imports are shown in red and the exports are in blue. 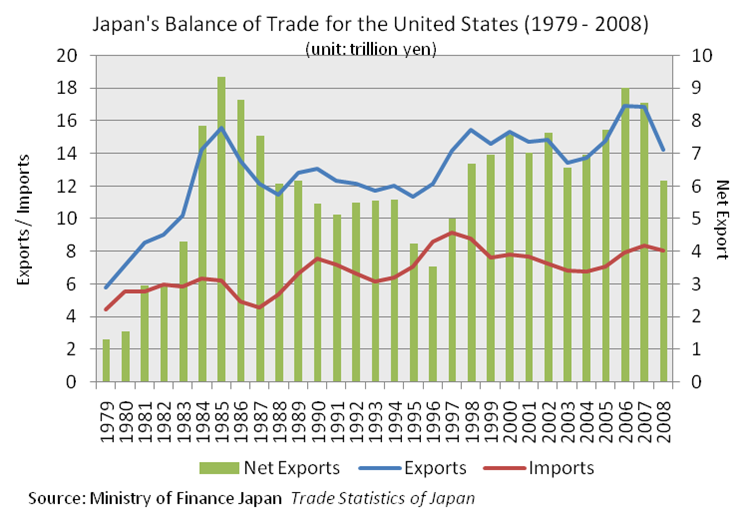 As you could see, for this period of time, Japan had a balance of trade that was positive, so they had a trade surplus.

Goods domestically sold that were produced in a foreign nation

Goods produced domestically and sold to a foreign nation

Globalization is the expansion of business into international markets. Now, much of this is due to less restriction, both physical and nonphysical. We have better modes of transportation and fewer trade restrictions on countries around the world. It's becoming a flattening world.

hint
In his book, The World Is Flat, by Thomas Friedman, he talks about the world flattening. By this, he means that the world is going through a globalization process where countries are freer to trade globally, and goods and services from all over the world are available in many different places.

This process started happening since World War II when international trade really started to take off because of many different trade agreements.

Now, international business is essentially what we've been discussing this whole time, and it's defined as business that is conducted between two or more nations. The simple fact that we're talking about globalization, and the fact that it's become such a significant part of everyday business, no matter what company you work for, goes to show that Friedman is probably right.

The expansion of business into international markets

Now, let's discuss business and trade on an international level. International management of trade is rather unique. You see, products that work well at home may not necessarily work well overseas. You also have to consider the actual demand for that product you're going to sell overseas, depending on the cultures and the norms of that particular nation. Will the product be accepted? Are there any changes that you have to make in packaging or marketing that will improve the acceptance of that product overseas?

Here are some other issues to consider in the context of business and trade:

summary
Today we learned about the basis of trade and the balance of trade. Products in and out are known as imports and exports. We also learned about globalization, as well as business and trade, focusing on the unique problems that are associated with managing international trade versus conducting business domestically only.

The capacity to produce a higher number of goods or services using the same production resources as competitors.

A trading advantage achieved over another company due to lower opportunity cost.

Goods produced domestically and sold to a foreign nation.

The expansion of business into international markets.

Goods domestically sold that were produced in a foreign nation.