Identify the effects of using gold as a standard.

Tutorial
what's covered
This tutorial will cover the gold standard, including its history and impact.

So, what is money? You might tend to think of money as bills, coins, checks, or something along those lines.

However, is this what money has always involved? Broadly defined, money is anything that lets us get what we want.

Now, people used to barter, exchanging one item for another. However, at some point in history that became inconvenient. Because of the time wasted trying to find someone who has what you want and also wants what you have--known as the double incidence of wants--people began trading commodities instead of bartering.

A commodity is something that has value in and of itself because it is useful and therefore easily traded.

Some examples of early commodities include:

think about it
If you think about this list of commodities, which of these items would be a good medium of exchange? Which would be easy to use to purchase the things that you want? Which would be a good store of value and retain that value over time? Well, some are better than others. You probably would not want to lug around large stones with you to use as a medium of exchange, and barley would not last a long time and be a good store of value.

So, why was gold was chosen as money? Unlike other commodities like salt or cotton, it does not have much practical value.

Well, the fact of the matter is that it does contain the following qualities:

This last attribute is key. When people cannot easily replicate something, it has a relatively stable value over time, which is what made gold very attractive as one of the commodities to become a source of money.

However, the question became how safe would it be to carry around and store large amounts of gold at home? We will tackle this question in the next section.

To solve this issue of owning and storing large amounts of gold, banks began to emerge as intermediaries. Banks allowed people to store their gold safely and made it easy to access as a form of payment.

People could write checks on their gold deposits without actually having to physically remove the gold from the bank.

This was when gold became a representative form of money. It was no longer just a commodity because, remember, a commodity is an item that has value in and of itself. The paper money, in and of itself, did not have value, because paper was worth fractions of a cent. However, it was valuable, because it represented something of value.

This paper money was even easier to trade than gold itself--an attractive proposition.

hint
Now, when a form of money is easy to spend immediately to get what we want, we call that liquidity. Therefore, paper money is liquid--it is easy to access and easy to use as a medium of exchange.

However, what actually gave these gold certificates--these pieces of paper--their value? Well, it was the belief. People believed that they could actually convert them to gold, and this is what gave them value. This is why money became a representative form of currency.

Banks were then able to make loans and start earning interest, the point where the banking system becomes similar to what it is today. People would deposit money into an account and banks would pay them interest.

Then, banks could use those deposits to make other loans, charging a higher interest rate than they paid to the depositor. Note, this continues to be how banks make revenue today.

A deposit account, then, is an account typically held at a financial institution that allows the owner to deposit and withdraw his or her funds.

Now we will discuss the gold standard, beginning with a bit of history. Throughout the 1800s, people could exchange paper money for either gold or silver.

Technically we had a bimetallic system, though it was much more common for gold to be used.

So, the gold standard came into place, which is gold backed currency such that paper currency exchanges for a set weight of gold. Gold, then, is the intrinsic value of the currency.

In 1900, the Gold Standard Act was passed and signed by President McKinley, making gold the only thing that could be redeemed for paper money. This act defined a dollar as about 1/20 of an ounce of gold.

Here is an image of a 1928 U.S. dollar. The fine print states that the U.S. Treasury will present gold to the bearer of the note on demand, so clearly, this is a dollar printed during the time when the U.S. was on the gold standard.

Here are some examples of early notes, which are interesting to see. This one dates back to 1882. As you can see, it is a gold coin, featuring Thomas Hart Benton It looks similar to our money today. 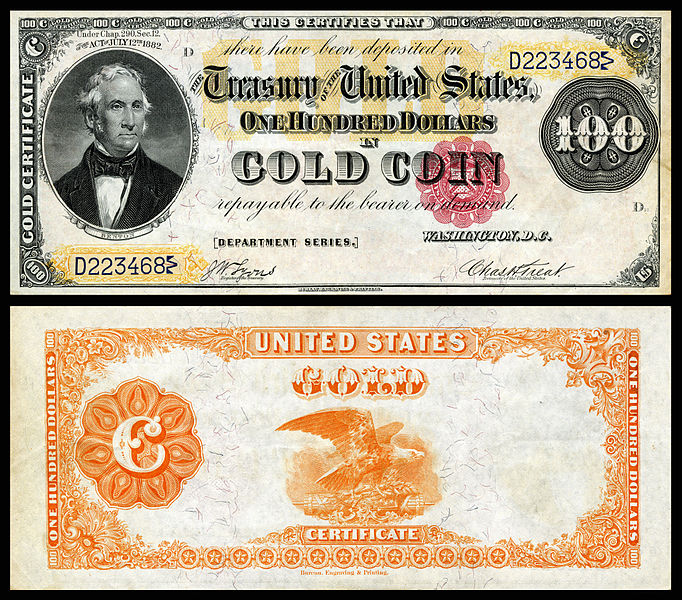 Here is another one from 1882, with a picture of Alexander Hamilton. 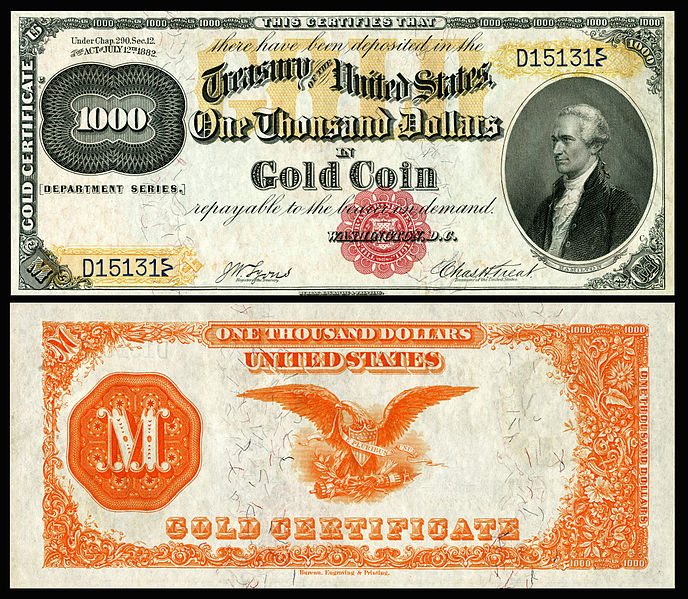 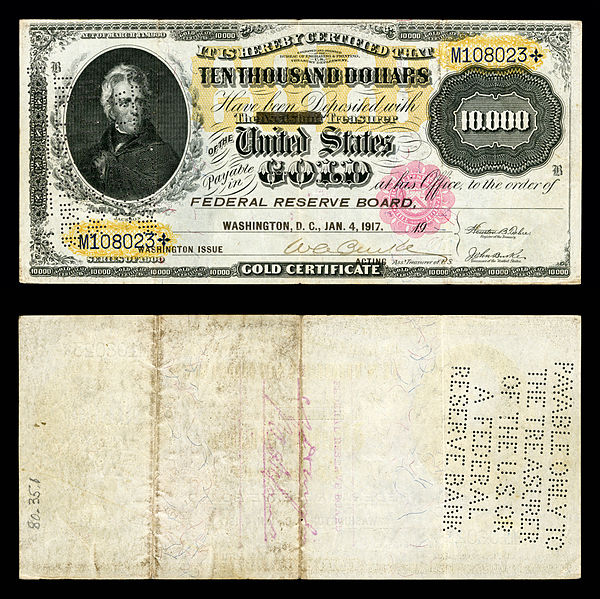 This last example is a gold certificate from 1934, featuring Benjamin Franklin. 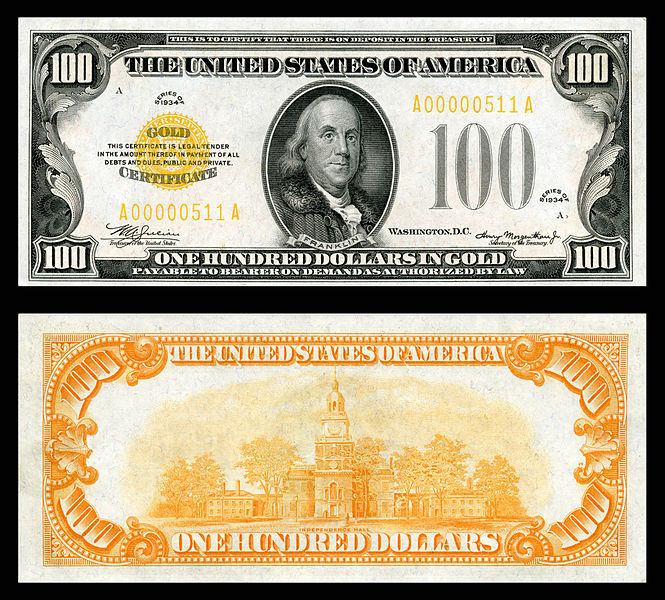 Gold backed currency such that paper currency exchanges for a set weight of gold; gold is the intrinsic value of the currency

5. The Great Depression and the End of the Gold Standard

When the Great Depression hit and the stock market crashed, investors started trading in gold and other commodities.

This caused the price of gold to rise. People started trading in their dollars for gold; they did not trust the banks and they began hoarding gold because they knew that possession of that physical gold was worth something.

This had a major impact. Franklin Delano Roosevelt responded by issuing an order that outlawed private ownership of gold, ordering people to turn their gold into the Federal Reserve in exchange for dollars at the current rate. This order was meant to prevent hoarding and to protect the U.S. currency.

At this time, then, the gold standard was suspended, because it was illegal to hold the gold.

FDR also increased the price of gold to $35 an ounce; this means that $1 now equaled 1/35 of an ounce of gold, instead of 1/20. Those dollars, though, were no longer redeemable for gold.

When the Great Depression ended, countries could go back to a modified type of gold standard. Most countries ended up valuing their currencies based on the U.S. dollar since, at that time, the U.S. owned most of the gold in the world.

However, as countries like Germany and Japan began to recover from World War II, the U.S. share of economic output in the world started to drop and so did its stock of gold.

There were some issues, especially in the late '60s and early '70s, where the U.S. started having a negative balance of payments, increasing debt in the economy and causing inflation.

In an effort to stabilize the U.S. economy in the early 1970s, Nixon ended the convertibility between U.S. dollars and gold, which completely suspended the gold standard.

An account typically held at a financial institution that allows the owner to deposit and withdraw his/her funds.

Gold backed currency such that paper currency exchanges for a set weight of gold— gold is the intrinsic value of the currency.